Video premiere for 'Lies We Eat' that MetalBite hosted for Death On Fire was my introduction to the band. Some time has passed, they've released an EP called "Six Foot Box" and there is also a new album on the horizon. Many things are happening so questions went out and Tim Kenefic (guitar/vocals) had some time to shed more light on what is going on. 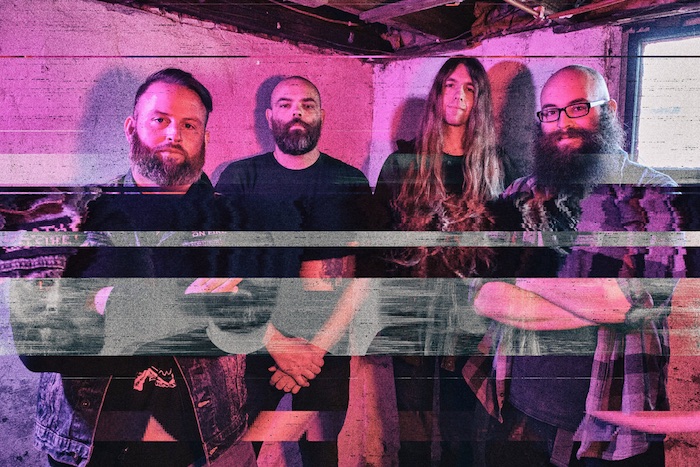 Thanks for taking time to do this, how are things?

Things are great. We are gearing up for some shows and festivals and working on finding a label for a LP we cut while doing the EP that released July 16.

Let's talk about it then, how long did you work on it?

This EP was about 6 months in the making. It was pretty painless in that we recorded it while recording another album that we are hoping to release through a label. These songs all fit together thematically and highlight a little bit of everything we do so it made sense to have them be an EP. The hardest part was the lyrics and some of the guitar melodies. Thankfully Kyle has a good ear for those things and had some good input. I took some vocal lessons during the pandemic and that definitely helped on the title track as it was a bit of a departure stylistically for me. It is definitely a new tool that I will keep using though.

Can you tell us about the recording itself and how satisfied are you with the outcome?

It was pretty organic because we hit a creative streak. We were able to record at a friend's studio for drums and at our own spot for everything else, so it was a pretty quick process too. We have some awesome friends that helped on mix and master and on the whole we are really excited about the outcome.

What can we expect from "Six Foot Box"?

Riffs, nastiness, and fun. The title track, 'Six Foot Box' is a more down song that you can chill to, and the rest of the album hits you in the mouth. It has layers weaving around and touches on all of our influences.

What is the meaning behind the title?

Six Foot Box has multiple meanings. A casket, the depth of a grave, and the distance that was socially acceptable between people during the pandemic. Everything was defined by 6. It was a strange coincidence that we ran with.

How do you compose, what happens when you work on new stuff?

These three songs were written through riffing. It was a very easy process. I loved playing them and just kept playing them organically. The songs came from that. Some quick changes to sections of 'Begging For Air' to add tension and delay timing. The most planned section was the bridge of 'A Hell Of Our Own Design'. We wanted a 12-tone thing and have it layer dissonance while building tension through rhythmic repetition. I am really happy with the outcome too.

Where there any non-metal influences that you can mention?

Nick Cave and Tom Waits. I blame Kyle. He loves that stuff and I have dived into it a bit. Kyle actually has a singer songwriter toning I help him on so that was fun. The way they work with textures and layering is something we hope to do more with in the future.

Who do you create for?

I write music for me first and foremost. It is cathartic and cleansing for my mind and soul. It is how I deal with all the negativity in my life. I always hope others enjoy it though. I continue to craft and refine and develop songs with the hopes that they become "good"

Do you expect anything from the listener?

I hope they like it and listen with intention. We write with a lot of layers and hidden little Easter egg stuff here and there. The more you listen the more the song unfolds. I hope they do that, but I don't expect anything, I guess. Music is an escape for a lot of people and how they consume it is for them.

Building or destruction? Which emotions contribute the most?

Both. I personally want to build awareness about some things that are important to me with our being obvious about it. That said, I also want to destroy. Destroy the old ways of thinking and listening and being. Through destruction comes rebirth. Everything is cyclical. I would like to think I am well balanced, but I do lack empathy. I am a doer and a fixer. If there is a problem, I take a moment to grieve or whatever may be required but after that moment all my energy is focused on the solution. I don't like to waste energy and I don't do well wallowing in my own shit or others. I am working on it because it is unfair to some people that need more time to process but it is a struggle.

I would do what I do today. I used to play Rugby but when age and injuries caught me, I switched to powerlifting. I hang with my kids and have a pretty awesome day job. Music is such a core part of me that I don't know I would ever stop but I can find other distractions here and there.

Death On Fire, what is the story behind the name, what inspired it?

Originally, we were "Lazerwulf". Little did I know there was a band that had that name already. I had a handful of names and talked with a good friend and ended up on Death On Fire. It seemed fitting because of the style of music we play and if you are drunk it is easy to chant. I was always more worried about the quality of music, but I do like this name even if it is a bit of a metal trope in it of itself. Necessity, opportunity, and a lack of creativity inspired it. It was the best thing we could come up with that was available after finding out we had to change the original name.

What do you think about all this categorizing and putting tags on music?

I get that it makes talking about all of the bands easier. There are a ton of bands out there now. I find it artistically limiting though. We are a metal band. We love all kinds of music and want to try all kinds of writing Hanson's couched in the metal style. If music is good who cares what else, it is.

Some say you play melodic death thrash. What would you call it yourself?

We are a metal band. If I had to do a deep genre dive, we are American Gothic Melodic Death Thrash, which just feels too specific.

Nowadays most of the labels and bands release their new material on CD, vinyl and cassette. What is your opinion about the physical media?

They are all good. We do a good amount of CD and cassette. Vinyl is great but it is cost prohibitive for where we are at currently. We have had several inquiries but the scale you have to do it at to make your money back is high. I love the sound of the cassette and the way it gently compresses things. I prefer any physical format to MP3. Don't get me wrong, streaming is convenient, but it definitely affects the sound in a different and less preferred way for me. It has an additional compression that you need to mix too, and I just don't like it as much as other formats.

Ok, we covered past and present. Where do you see yourself and the band in the future?

Total world domination!! We aim to be bigger than KISS and more merchandised. All kidding aside we are seeking a label partner for the album we recorded alongside our EP Six Foot Box. That is our short-term goal. That and some festival and tour stuff for the end of the year. We also hope to be a few more albums in, actively touring the world and working with a cool label. We have a plan in motion and are currently cleaning up our social media and doing some brand image refining. The business side now a days is so important, and we are very focused on that right now.