Polish band Chainsword is a pretty hot contender for the Bolt Thrower successor throne. Recently they released their debut album "Blightmarch" and attracted a lot of attention (the review here). I asked the guys a few questions about the history of the band, influences and also private things and Mr. Brummbär (Voc.) and Sarin Spreizer (Git.) were kind enough to answer my questions very quickly. Have fun!

Hello everybody, how are you?

You are still a fairly new band; can you introduce yourselves to our readers?

Sarin Spreizer: Chainsword is an old school death metal band from Warsaw, Poland. Our brains are soaked in war stories, Warhammer 40k and buzzing guitar riffs. I'm Nerv or Sarin if called by my Chainsword name. I play the guitars and try to manage egos. Joined the band when it was quite well formed musically.

Herr Brummbär: Riff worship all the way. I'm the band's voice and main lyricist, on board nearly since the beginning.

Your debut album "Blightmarch" has impressed me quite a bit. I've read only positive feedback about it so far and also in my circle of friends the corresponding people found the album pretty cool. Did you expect such a good response?

Sarin Spreizer: We knew that the music was good enough to release it! There are so many great bands competing for everyone's attention that we just didn't know if it would cut through. We are very satisfied with the response so far and mobilized to do more. These weeks are really intense with all that positive social buzz that's happening.

Herr Brummbär: Exactly, we like the stuff, find it entertaining, but never would I even think about so much praise. It's quite overwhelming. Still, let's not hyperbolize. We're no Metallica, I know how many albums were sold, how many people stream Blightmarch, yet, the moment we realized where those people are, it just struck us: "shit, the stuff's all around the world…".

You make no secret of your influences. This is primarily Bolt Thrower. Do you want to become their legitimate successor band?

Sarin Spreizer: Forces within battle hard to form our unique style. This album is exactly what it is supposed to be. Rough, straight praise to the sounds of our mentors that inspired us to bash guitars and turn the gain to max. We want to keep it simple and pass the energy that fuels us to our listeners. Bolt Thrower made us do it.

Herr Brummbär: I have just one thing I think is mandatory for us - all has to be primitive and carry a punch. The rest is the effect of a melting pot of ideas. Some of us treat Bolt Thrower as religion, others would rather thrash it up a notch, etc. We don't really want to be heirs to any big metal band. We'd rather do our stuff and claw our way up. As for comparisons - they're inevitable.

What other influences do you have?

Sarin Spreizer: In the metal genre I love Slayer and Entombed, the polish band Abused Majesty. Besides that, Raketkanon, Rishloo and many more that caught my attention over the years. This answer for every musician could be endless talking and bringing up all the bands that made us.

Herr Brummbär: I've been feeding mostly on speed/black/thrash bands over the past couple years. Apart from that, I go with everything that currently suits the mood.

Lyrically you walk between fantasy and the topic of World War II. Why didn't you treat one continuous theme, that would have been much more conclusive?

Sarin Spreizer: That's what everyone expects! So just no. Accept things the way they were made.

Herr Brummbär: It's everything that keeps us rolling. We wanted to keep the lyrical side of the album open, with just one thing in common for all the songs - war. We'd much rather release an album that is complete music-wise, rather than waste time on a bigger concept behind the record. The latter would be, at this point, a bit forced, as we had different priorities.

Can you tell us a little bit about the lyrics and the process of creating them?

Herr Brummbär: I wrote most of them. Herr Feldgrau and Wutender Ente added their stuff as well. As for me, I listen to the new riffs till' something clicks in my head. I'm really into the history of the XX century, so there's plenty to choose from. Thanks to the guys, I also dove deep into the WH40K lore and found a ton of awesome stuff I'd like to yell about there.

Speaking of lyrics, what is 'Daemonculaba'?

Herr Brummbär: It's the most vile, disgusting and revolting thing in the WH40K universe. Too keep things short: imagine a planet turned into an industrial chaos warrior's factory. Add the fact, that they are being born from disfigured living women in great halls. Oh, and they do it on a pile. And the children are sometimes born without skin. Or with their organs outside the body. Or absolutely mutilated. And they all go to the pile. Seriously, read about that shit. It's the definition of "something metal".

You have made the recordings in two different places. What is the reason?

Sarin Spreizer: The year was messy, and our recording process was messy as a result. First we weren't fully ready to record guitars on the drum day then came the pandemic so it's kind of slowed down our progress.

Herr Brummbär: On the upside, two places meant it would be much easier to find time and space to further the works on the album. It worked for me, when I decided to stop the recording on one day, just cause the performance wasn't up to par, and was able to easily finish everything the very next day without interrupting anything, nor anyone.

How did the recording process go?

Sarin Spreizer: Like stepping on a cute little kitten with a disease that could lead to extinction of man. It had to be done.

Herr Brummbär: I gave myself two days to work on all the vocals. It actually took two and a half, like I said a minute before. We learned a lot working on this album. Most importantly, we now know how every one of us works and what needs to be done to improve their performance and speed up the work in general.

Who actually had the idea for the cover? I think the pentagram as a bra is pretty funny. What was there first? The five breasts or the bra?

Herr Brummbär: I know a guy I used to work with - Wilson Arietta. He's an old-school metal maniac from Argentina and a very talented painter and visual artist at the same time. I knew he would be perfect to prepare the artwork for us. His works are dark, violent, disturbing and, at the same time, full of detail and violently primitive. I introduced him to the band and then he and Herr Feldgrau had a brainstorm over the concept. Then Wilson came up with this quantitated monstrosity. 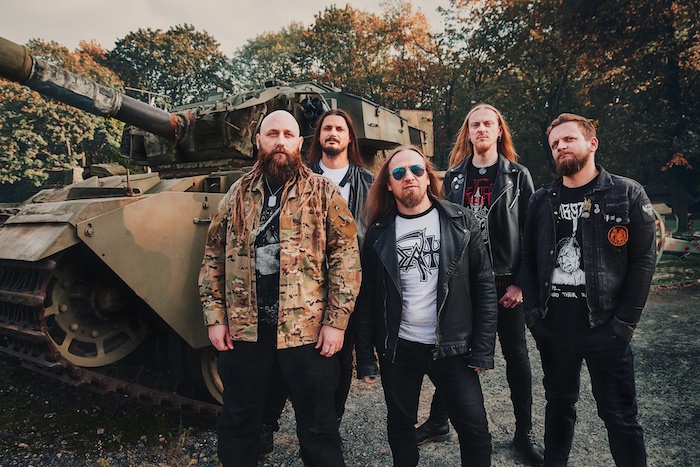 I know from some bands that they use the whole pandemic as an opportunity to write and record a lot of songs. What about you guys? Are you guys on it again?

Sarin Spreizer: We have many ideas stored in our phones and drives but we usually finalize the song at the rehearsal so we will gradually show up with new material. We are definitely pumped and ready to go. So, fasten up.

Herr Brummbär: We just finished working on the album, so there was not much time to fully switch our minds on a new track, but alas! We already have two new songs ready. As for now, we focus on promoting the album, try to play some pandemic gigs online etc. There's still plenty to be done with Blightmarch.

Are there any further plans, any split CDs, EPs, merchandise or tour plans when the whole thing gets back to normal (so around 2049...)?

Sarin Spreizer: We have a split forming and watching closely the situation on the touring front. But the truth to be told is that this can be another pathetic year gig wise. We will focus on bringing more of our music to light in any way possible.

Herr Brummbär: We have plenty of ideas in store, but it would be unwise to unravel it all here. We'll surprise you guys.

When you think of the death metal scene in Poland, Vader, Hate or Behemoth immediately come to mind. But there are a lot of other cool bands in your country. Which ones are you in contact with or can you recommend them?

Sarin Spreizer: Well some of us have other projects going on like Virulent Scourge, Lunacy and others. We look forward to our online stream gig with Panzerfaust. Besides that, definitely worth checking out are bands like Martyrdoom, KOIOS or Coffinwood.

Sarin Spreizer: For me "Those Once Loyal" was an instant drug and there is no sense in focusing on or picking the weakest. Someone could choose to spend that time to take heroin, drink or be just useless. Instead chose to record music. I admire that. You be the judge.

Herr Brummbär: "War Master" if a piece of beauty. I admire the sound of "Those Once Loyal".

Why did you use such strange pseudonyms that don't really make sense in German?

Sarin Spreizer: If I recall it right, the moment I joined the band, guys wanted me to pick something in pseudo-german warish theme just to dive into the zone where tanks, guns and dismembered flesh was my new reality. It worked a little but at that time I was like "I'm here to play the guitar and record music". Pick something. Do not care. Were those names made to make sense. No. So they don't.

Herr Brummbär: Check out Anima Damnata if you want to find some entertaining pseudonyms. Ours don't make much sense, don't need to.

Another topic - I know that two of your band had Corona - what do you think about all these deniers and belittlers?

Sarin Spreizer: Herr Feldgrau and I got infected. We were in masks when talking and keeping our distance, but the thing is really contagious. We had a chance to freeze the spread a year ago but that attitude everyone's an expert has led us to this day. We can only hope that the vaccines will be enough to normalize the situation. Every sick person raises the probability of creating a mutation that will be more deadly and of making the current vaccines obsolete. The media are too to blame. For so long fear was their weapon… to be continued on an endless internet rant.
Take precautions. Don't spread it. Soon enough someone you know will be sick. Let's hope he or she will not die.

Herr Brummbär: Everybody, stay safe and keep an eye on yourselves. The quicker this mess ends, the sooner the music industry will come back with full force.

Finally, do you have some words for our readers?

Sarin Spreizer: Congratulations you made it to the end. It was longer than 280 characters. Listen to Blightmarch till' the last song. You seem like just the human being for the job.

Herr Brummbär: Have you tried turning it off and on again?

Thank you very much for the interview.

If you are interested, the band will play live on the 23rd of March (7 PM CET) on the internet. Here's the link to it: https://www.songkick.com/live-stream-concerts/39781063-chainsword