British one-man band Garden Of Eyes recently released EP "Boomhammer" (review here). A pretty old-school affair, in my opinion, and well worth mentioning. Since bandleader Jørgen is not only active in his band, but also a very active reporter colleague, it is definitely time to take a closer look at him. I sent him a few questions, which he answered promptly. After all, one has nothing else to do!!! Many thanks for this!!! 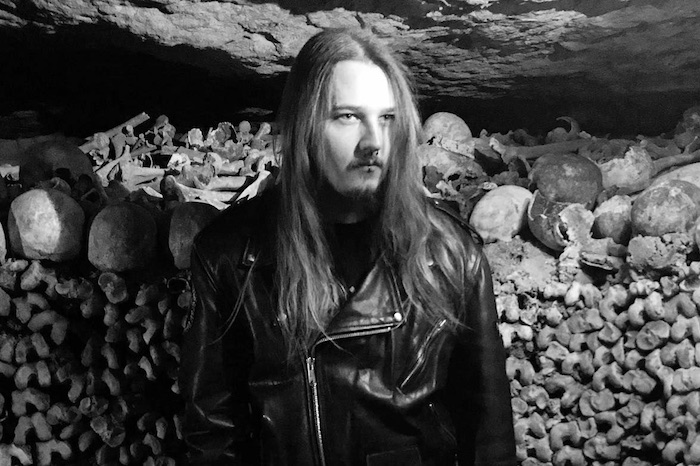 Hi Jørgen, how are you doing?

Hey dude, I am well, thank you! Blasting heavy metal, writing some riffs, all is good!

You recently released the single 'Boomhammer' with your band Garden Of Eyes. You are obviously inspired by old stuff like Entombed, Dismember, Autopsy or even Black Sabbath. Am I right with that?

You are indeed correct! Garden Of Eyes is inspired a lot by Swedish and Finnish death metal, along with American and South American bands too. Also, a lot by heavy, speed, thrash and black metal! All of this can be found in our songs for those who have a keen ear, clearly you can hear things dating back to Black Sabbath!

What are the lyrics on the EP about? Boomhammer sounds, just like the name of the band, quite hippie style, haha!!

Garden Of Eyes is certainly nothing hippie! I care about nature but that has nothing to do with the band at all. The name is a creature from the Bloodborne lore, adapted from HP Lovecraft's Mi-Go. The lyrics on 'Boomhammer' are relating to 2 weapons in the game, the second being "Saw Cleaver". The lyrics go into the lore of the weapons usefulness and origins with some good old morbidity of them in action too.

Do you have any plans to release a full-length album with Garden Of Eyes?

I certainly aim to, but the band is not ready yet. The reason for doing the 4 demos, compilation CD of demos and now 7" vinyl is to allow the band to mature and grow. When I do an LP I want it to be the ultimate offering of death metal we can create! That said, it is definitely on the cards just not to be rushed.

You had some other bands before and carried them to the grave. Why didn't you continue with them?

I wouldn't quite say I killed them per se, as they will forever be a part of me and even Garden Of Eyes as they are influential on all I do. But I decided I needed to focus all of my energy into Garden Of Eyes if it was to reach its full potential. I will always have other musical projects and there is no denying some of my past ones may crawl back from the grave, but for now I need to give Garden Of Eyes all I got.

You are quite young, 23 if I'm right. I have to confess that I don't know too many people your age who love heavy metal. How did you come to that?

That is right, I am indeed a young guy. I have been into heavy metal since I was about 7-8 years old, thanks to the band Dream Evil with their song 'The Book Of Heavy Metal' which led to me discovering the genre through traditional bands such as Iron Maiden, Black Sabbath and then onto Black and Death when I was a teenager. Since day 1 heavy metal has been my life, and I bleed it to this day, more so than ever.

How did it happen that you live in England? Your name lets me suppose another place you would live...

I am of Norwegian lineage, this is where my family is from, but I was raised in England! Quite simple really! I love Norway, but England is also a really cool place with London having such a vibrant music scene and the whole country having cool bands even in its most rural corners such as Norfolk!

You're not only having a band but also a cool metal blog called "Nattskogs Blog" where you write very often. From where you get all the time to do these things?

That's right, and my Nattskog YouTube channel! As I said earlier, I live and breathe heavy metal, so finding time is not hard when the passion is there! Of course, I am lucky to be in a position to be blasting metal all day and making music, working with cool people etc., I never take this for granted. But really, I refuse to live life any other way. My father died exceptionally young, and it taught me to never compromise, take life by the throat and in my case, die for metal! Otherwise, it's too late and that's your chance gone.

What is it that makes heavy metal so much of a lifestyle in your opinion?

For me, the lifestyle isn't one of partying or social things as such. I am a pretty antisocial person by nature unless in a situation that really evokes energy in me such as a gig. For me the metal lifestyle is one of obsessive and passionate dedication. By this I mean things such as fanzines (and in modern times webzines such as yours or mine), tape trading, collecting physical music, going to shows etc. These are all tangible experiences and things that create such a die-hard culture that is truly unique. So in summary, the lifestyle is total remorseless dedication to heavy metal, no matter who you are, where you hail from or what you believe, you either have that flame or you do not.

So, my first concert was Children Of Bodom, Amon Amarth and Ensiferum at Norwich UEA in 2011, I was 13 at the time and it was insane to see heavy metal music played in the flesh. Since this, I have witnessed between 800-900 live performances between festivals and gigs in 10 years, a feat I am incredibly proud of as it yielded so many wonderful experiences and taught me a lot as a musician too!

As for my first CD of heavy metal, that would be "Somewhere Back In Time" compilation by Iron Maiden, containing the best of their earlier discography! The song "Powerslave" especially stuck with me as a young guy who was obsessed with Ancient Egypt.

Which are the most important and maybe the most precious items in your metal collection?

For me, the most important are the classics of course such as Judas Priest, Iron Maiden, Slayer, Mayhem, Necrophagia, Entombed, Dismember, Nihilist, Autopsy and so on! I could list most of my collection as it is all precious to me! One that means a lot to me is a copy of "Death - Pierce Me" by Silencer which was given to me by my brother and often musical partner K.S.H.

Which albums of this year (hopefully there will be 6 more interesting months full of good releases) would you recommend to me?

I always love this question, as nothing makes me feel like I am spending my time better than supporting underground bands! So let me give you 10 bands whose 2021 releases I think rule! Grave Miasma, Qrixkuor, Craven Idol, Blazon Rite, Heavy Sentence, Herzel, Morbific, Coffin Mulch, Carnal Tomb and Suffering Hour!

Finally, the last words are yours!!

Hails to MetalBite, the German Heavy Metal Legions / bands and all who read this interview and support heavy metal! Buy some Garden Of Eyes vinyl, tapes, CD's or merchandise so I can buy more records and DIE FOR METAL!

Cheers and thanks a lot for the interview!!!