They come from Portugal to destroy the taint of the earth. Barbaric Horde emerged with audial vitriol and a philosophy walking the line of the extremity. "Axe Of Superior Savagery" was released in 2020, a year of fucking disaster and wretchedness, a season of sickness that will remain imprinted for eternity. That year also spawned the first full length of Barbaric Horde that cast a spell of culling that would sweep clean the underground and outside premises. MetalBite was given the opportunity to interview the leveller behind this primitive and much needed chaos. Candid be the words from this malignant agenda vessel. 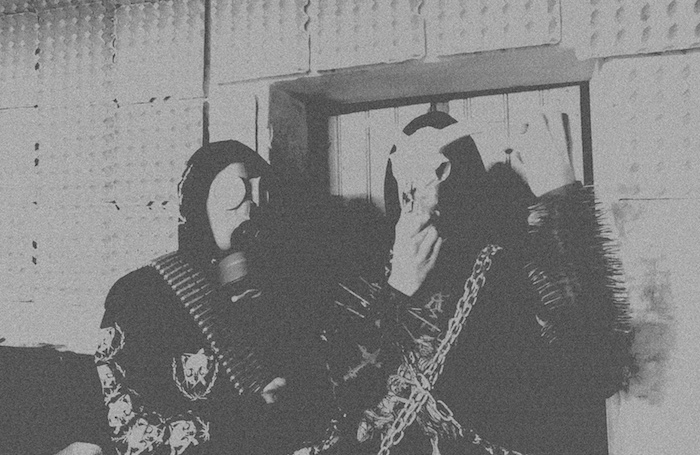 Thank you for taking time out to be apart to this interview with MetalBite. What do you aim to accomplish with Barbaric Horde?

Our aim is to make savage and violent music.

Is there any philosophy that the band adheres to as far as Barbaric Horde's music?

Our music is based on destructive hordes that march in order to celebrate a new world order. Everything in the way shall be extinguished.

How did you end up on Godz Ov War productions?

Nothing was predicted, all came up in a very natural form. Greg at Godz Ov War have showed interested in Barbaric Horde album.

Describe your experience working with Greg and Godz Ov War on the "Axe Of Superior Savagery"?

It was a great experience working with Greg, his cooperation and support have always been excellent and competent. Also is worth to mention that another Polish label (Rex Diaboli) also have join the ranks to co-release the first album.

Did you intend it to be such a primitive album structurally?

Yes, since the beginning.

As far as recruiting members for the band, what criteria were there apart from being competent musicians? Any ideological common ground? If so, what are those?

Similar musical tastes are important for a good tuning, also full commitment to the cause will is required.

Are there any plans to add another unit to the band?

No plans to add a permanent a head to the band, perhaps a live session musician, if so.

There are many fronting the black/death/war tag, what separates Barbaric Horde from the larger populace?

We want to keep crafting our path, we do our music for us and for those who see interest in it. It is not music for the masses, but for those who worship the barbaric bestial cult.

And what are your thoughts on this oversaturation within underground metal?

There are a lot of bands nowadays, I have discovered some great new acts, black metal speaking. In a world with so much to offer there are tastes for everyone, we just need to filter what is good and what is not depending of our tastes.

Many references are given to Satan on "Axe Of Superior Savagery are you Satanists?

We vomit at the world of nowadays. We aim to glorify the Master and the victory of the blackdeath elite.

What does Satanism mean to you?

We are related to Satan, at the same level that we are related to hate, obscurantism, cruelty, and a large disgust to the human race. Black metal is an art of occultism and devotion, yet is still an art of individualism, negativism and perception.
I see in Satanism the strength and the will that common people cannot achieve, by being limited to this rotten society, following futility and ignorance.

Describe the creation of the album, what events took place that aided in the spawn of "Axe Of Superior Savagery"?

The album is a product of what surround us in that period of composition. The influences for Barbaric Horde derive from aggression, our musical background influences, hate towards this tolerant world of nowadays.

What was your introduction to black/death/war metal?

Was back in 93 with Sepultura, Deicide, Cannibal Corpse etc. Later in 95 the world of black metal has taken my soul for eternity.

And what was your reaction to the sub-genre at the time of the first encounter?

I was a kid back then, and it was like "Fuck, this is right up my alley". I found a deep interest in such a violent and caustic music genre. And later came the anti-Christ and satanic philosophy in which I have completely dive through.

In what ways did the music correlate with your philosophy?

They walk together hand in hand. The music has opened portals to the abyss of perdition.

What bands do you cite as direct influences for Barbaric Horde?

Since we are two heads, and each one has its own background and influences, we need to find an equilibrium between tastes, which sincerely is easy. Personally, my influences for BH are Blasphemy, Bestial Warlust, Revenge, Diocletian, etc.

Being from Portugal that has a rich underground metal history, what bands do you frequent?

Portuguese scene is becoming stronger and stronger, and has a lot of quality acts such as Satanize, Armnatt, Ruach Raah, Vetala, Irae, Grave Of God, Black Cilice, etc, etc, etc.

How do you view the scene as it stands? What things please you and what things do you find displeasure in?

The scene has change comparing it to a decade ago, and will always continue its mutation, as it is the natural way of things. There are some good bands arising with the right spirit and attitude. Black metal has becoming too accessible. There are plenty of black metal internet warriors nowadays, that know nothing what BM is all about, and think its only a musical genre to expose on social networks. Too much couch reviewers in my opinion, useless garbage that floods the internet with shit. Think for yourself, listen the album and take your own conclusion.

Is there any new material in the works?

We are working on a new album as we speak.

Are there any intentions to bring the material to the live setting?

It's a possibility to have BH playing live, it is not a priority though.

"Axe Of Superior Savagery" stands well within the underground as an example of uncompromised wrecklessness; thank you for doing this interview with MetalBite; hails!