British quartet Wode has recently released their third full-length album "Burn In Many Mirrors" (review here). In my opinion it is one of the best black metal releases so far in 2021 and so I asked the guys to answer some questions. Guitarist / Vocalist M.C. took the time to answer them very quickly - thanks for that! Enjoy the interview. 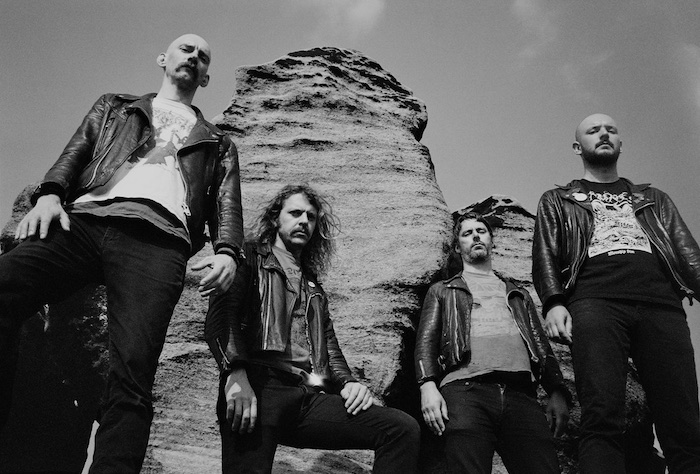 Hey, thanks for taking time for the interview. How are you doing?

I'm doing well, thanks. Some sense of normality has returned here with venues opening their doors once again. We just played our first gig in support of the new album a few days ago in London to a really responsive crowd. I guess we'll see what the next few months bring but it certainly felt good to be back playing live.

I have to confess that I didn't know Wode (shame on me!) until I got your new album "Burn In Many Mirrors". Can you introduce yourselves a little bit to our readers?

Wode began as a two-piece around 2011 (myself on guitar & vocals, Tim on drums & vocals). The initial idea was to play raw and primitive black metal influenced by the old masters. We wrote a handful of songs before expanding to a four-piece and recording a demo. The music began to move into different territory, and I assumed sole vocal duties not long after that. The self-titled debut album was released in 2016, followed by the second album Servants Of The Countercosmos in 2017. We've changed second guitarists a couple of times over the course of the band, but the current line-up has been together for over four years now. Writing for Burn In Many Mirrors began in 2018 and continued between tours (with Wode and our other bands Aggressive Perfector & Heavy Sentence). The new album came out in April 2021 via 20 Buck Spin.

What does the title of the album mean? Can you explain it a little bit more detailed?

The mirror is a liminal place, it exists as a threshold between and either side of different spaces; the above and below, dreams and consciousness, life and death etc. The rest of the title is pretty much self-explanatory.

Compared to your previous albums, I think you let more influences flow into the songs, and they are much more varied. What would you say are the most important influences for Wode?

Over time we've become less concerned with fitting into the perceived framework of black metal - or any one subgenre for that matter - and instead have focused entirely on writing music that satisfies our creative needs, whatever they may be at the time. We've certainly changed as people in the ten years the band has been together, so it makes sense that the music would change as well. I think the latest album is the truest representation of what we're all about, and although it draws from many different sources, I think the way we've improved as songwriters and musicians means that the music sounds cohesive and like its own thing, rather than like a sum of its parts.

I am still quite astonished about the interesting twist and turns in your songs. Let's take 'Serpent's Coil' as an example. You use so many surprising breaks in that song that it is quite amazing. How do you get the ideas for such compositions?

'Serpent's Coil' grew out of some initial riffs that Tim had written which we worked into an arrangement between the four of us, the melodic part which comes in at 2.09 was something I had been playing around with previously that ended up working for this song, and the latter sections of the song came about very organically through jamming and improvisation. So, I'd say it's through an assortment of different writing techniques, the personalities of the band members, and a general desire to move the music into new territory that we achieve these unexpected twists and turns in the songs. From there we work tirelessly on the arrangement and the refining/editing of parts in order to improve the flow and make sure everything works as a song rather than just a collection of riffs.

How did you come to the idea to create such an epic song like 'Streams Of Rapture'? How did it come to make a trilogy out of this track?

This was the last song that was written for the album and the intention was always to end with a trilogy to mirror the triptych on the cover as well some other concepts from the lyrics. We wanted to create something quite dramatic with a lot of peaks and troughs that would work as a culmination of what had come before and as a clear end point to a journey. We don't normally plan things out so clearly beforehand when writing but it was felt that a different approach was needed for this song.

We worked on parts 2 & 3 together in the practice room and Tim came up with the keyboard intro later. We had an enforced break after a few days of recording the album due to UK lockdown restrictions, and during the months between recording sessions this was the song we worked most on individually to refine leads, solos, synth parts, lyrics and vocal delivery. Quite a few people have named the song as their favorite on the album, so I think the extra work paid off.

Lyrically you deal with mysteries and the underworld. What are the most important mythologies you draw inspiration from for the lyrics?

There are many different mythological tales that have provided inspiration for this album, but the ones referenced directly in the lyrics are the Greek descent myths such as Orpheus & Eurydice, Theseus & Ariadne, and the infernal rivers flowing into Tartarus which are all interwoven with our own story of physical and spiritual transformation in the underworld. All of which takes place in a setting inspired by the visions of William Blake, religious prophecy, folklore and dreams. Much like the music, the lyrics draw from a multitude of different sources, but I think the central theme manages to marry everything together.

The mythological topics also manifest in the cover of the CD. You can find a painting where the people descend into the underworld and the deeper they get, the more deformed they are. Was it originally planned to have this image as cover or how did you come to this?

The cover painting was created by Santiago Caruso and differs quite a lot from our original concept, which was based loosely on the William Blake etching 'The Descent of Man into the Vale of Death'. The only element that really survived from our initial idea was to have the painting laid out as a triptych. After talking with Santiago, it became clear that he prefers to work without much supervision, instead painting instinctively while using the lyrics as a guide. He would show us sketches every now and then, but we pretty much left him to it, as it was obvious that he understood what we were trying to achieve. The way he portrayed this idea of 'descent', less through actual motion and more through a gradual disintegration of the characters on either side of the triptych, as well as the central image - an inverted spinal 'Jacob's Ladder' leading to the underworld - was perfect and completely captured the mood of the album.

What would you say is the most important message of Wode?

The word 'Wode' comes from the Middle English dialect and can mean 'mad, raging or possessed', and I suppose this definition has always guided what we've hoped to achieve with the band. To use this music, the volume and aggression, as means of transformation into some kind of altered state. To embody an unspoken, primal energy that goes beyond conscious thought… But this is perhaps more of a personal feeling related to writing and playing the music. There are many different concepts being explored lyrically but I'm not sure if there is one overriding message for the listener. To be honest, we're fine with people interpreting the music and lyrics in whatever way they see fit.

Do you have any plans for touring or festivals in the next months, if the new virus mutations will still allow this?

We have a sold-out headline gig in Nottingham next month, followed by the long overdue album release show in Manchester at our favorite venue the Star Garter, then we play Damnation Festival in November which now has a mainly British line-up (Carcass, Paradise Lost, Godflesh, Esoteric etc). Plenty of UK dates are lined up for next year too. Hopefully we will be able to tour mainland Europe again in 2022 as those trips have always been the most memorable for us in the past, but obviously it's a complex situation and there are other factors aside from covid at play too. If it's possible then we will make it happen.

Last but not least, can you name at least three albums you consider as essential for every metalhead?

Good question, but difficult to give a definitive answer without leaving something obvious out! So here are a few off the top of my head without overthinking it too much. These albums cover most of the bases and I would personally consider all to be essential.
Black Sabbath - Paranoid
Judas Priest - Sad Wings Of Destiny
Morbid Angel - Altars Of Madness
Necromantia - Scarlet Evil Witching Black
Slayer - Hell Awaits

The last words are yours!

Thanks for your questions. The second pressing of Burn In Many Mirrors will be available in late September.