When you have a look at Metal Archives, you'll find out that there is only one band that is named Killing. Quite unbelievable but true. Besides the unique name in the metal scene, the music is also very original. The four guys from Denmark recently released their first full-length album "Face The Madness" (reviews can be found here) which is a very cool old-school thrash hammer. One could say Danish Dynamite. I had the chance to chat with Jesper (dr), Rasmus (voc, bass), his little baby Ludwig and Snade (git) about the album. "Three Men and a Baby", so to speak!! Enjoy the interview and check out the album!!! 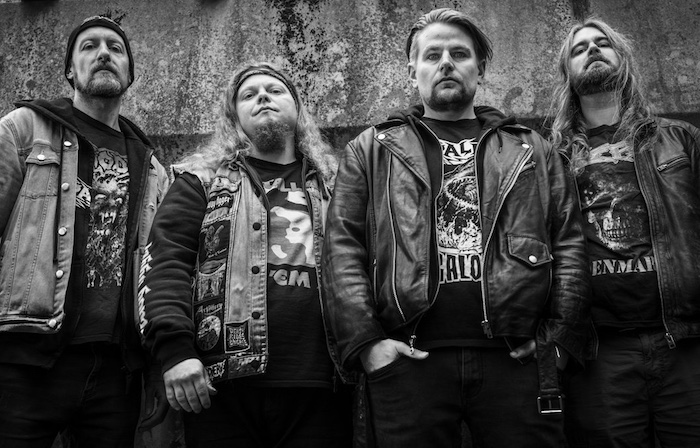 Hello everyone, how are you?

In August your first full-length album "Face The Madness" was released via Mighty Music. How did you come to the label?

J: Well, it actually came to us. It was the label manager Michael Andersen who wrote a message a long time ago and asked if we could send them a promo to do an album with them. Of course, you don't say no because it is Mighty Music, a very well-known Danish label, very legendary here in Denmark. We had plans to do the album but we didn't had arranged any studio time or planned anything. I don't know how he came upon us, where he found us or heard about us, but he was interested. That was where it started.

The album grabbed me the first time I heard it. You play old-school thrash that gets you right away. Are you more influenced by the old thrash stuff or are you more oriented towards newer stuff like Warbringer and co? Or is it a mixture of both?

R: Mainly it's the old stuff. We love the new wave of thrash metal but we're mostly inspired by Kreator, Slayer, Overkill and Destruction.

J: It's just as he said. We have all been raised by old Metallica and Slayer and that's all the stuff what we started listen to metal. When our vocalist asked us if we wanted to do this band, we all were engaged in other musical projects so we had no time for that until 2013 and when we were in the rehearsal room, we decided from the beginning that it should be that sort of thrash metal that we liked back in the old days. So, it wasn't going to be modern but we also listen to new stuff coming out but it's mostly the old stuff that has inspired us. That's what we always have been listening to. Our guitarist Snade likes the more melodic stuff like Annihilator for example and our other guitar player (Rasmus Holm Sørensen; M.) is more into Exodus and crossover stuff. So, when they both write the riffs, you get that Killing feeling and with Rasmus' vocals on top of that you get a picture of what Killing sounds like.

How old were you when you started listening to heavy metal?

R: I think I was about 11 years old when I started listening to Black Sabbath.

J: My grandparents gifted me a stereo when I got confirmated. One of the first CDs I bought was a compilation with rock hits on it and I didn't knew a shit about music at that time. But so, I discovered Guns n' Roses, "You Could Be Mine" and I needed more of this then.

S: I guess it all started about 1992 with Metallica and Iron Maiden. I listened to Europe before, but it all became serious with listening to these two bands.

You say that you are much influenced by Slayer and Kreator. What do you think about their newer albums – I mean they are quite polarizing?

J: I like it. I like the melodic side of Kreator as well as the old aggressive, dirty stuff. And "Repentless" was a good album to go off with. It's just Slayer, a good album to end their career.

R: Yeah, I can agree. I like the new Kreator stuff especially. Of course, I also like the older stuff, but they have age with fury on their newer albums.

S: I haven't hear most of the newer stuff, only one or two things, so I'm not into this.

Well, I often think about Blind Guardian when I listen to the last release by them. It's okay but not their best they composed. When I take a closer look at the cover, I'm a bit confused. What do you want to tell us with the cross? That the church supports war and heavy metal? Is that supposed to be Stryper? Or does each picture stand for one song of the album, in which case one would be missing?

J: Shortly explained, we decided that the artwork had to be something special because this is our debut album. Rasmus, our other guitar player said that it would be cool if the cover had some iconic feeling. For example, when you see the cover from "Among The Living", you know it's Anthrax or if you see "Master Of Puppets", you know that it's Metallica. We had a lot of debates in the rehearsal room and a lot of stuff coming up and being suggested. We came to the idea with a priest and developed the idea further, that he is trying to baptize a kid and holding an axe in the other hand. The whole meaning by the title Face The Madness is that the priest has lost his belief in what he is doing and the cross in the background, all these small televisions in it are a symbol of all the bad things that are happening in the world. War, violence, diseases, all this kind of stuff and this is the reason why the priest has lost his belief. Now he has gone mad and is ready to chop this child in a half.

Unfortunately, I don't have any lyrics, but I think titles like 'Before Violence Strikes' or 'One Last Victim' are rather self-explanatory. What about '1942' and 'Straight Out Of Kattegat'? World War 2 and Sea Monsters from the Baltic Sea???

S: About 'Straight Out of Kattegat', that's a long story. It started as a joke and became a T-shirt and then became a song. Basically, it is a song about Kattegat, that's a part of the Baltic Sea close to where we live and it's a story about a sea monster that lives there. That's the short version of it. I like songs that are narrating a story, and this was my attempt of writing a story.

J: '1942' is a celebration for the Danish Resistance Movement in the WW2. There were some groups that started in 1942, some kids among other resistance groups called the Churchill Club that teased the Germans a little bit. Another group was the "Hvidsen-Gruppen" who didn't do any dangerous missions but they started receiving weapons and stuff like that from the Britain when they dropped it by airplane. It's a celebration for the people who lost their lives to fight against the German invasion.

Where do the ideas come from?

R: Well, I like to write about violence and killing people. I don't know why (laughs).

S: I try to find a subject, apart from sea monsters. Most of my ideas come from TV or imagination, whatever comes into my head.

J: For me it's very different from where I get my ideas for my lyrics. It can be something when we have rehearsed a song and get a picture how this song is going to sound. You have a certain melody in your head and then suddenly some words pop up in your head and this can be about violence and killing again (laughs) or war or whatever. When you play this type of music we play, there are some boundaries. You cannot write stuff like "roses are red, and violets are blue" and all that stuff. It has to be aggressive, it's thrash metal!

What are your plans regarding tour or concerts?

J: We have six shows booked. The day after the album will be released (August, 13th) we have three shows near Copenhagen, also in the autumn and winter. We haven't been booking that much because we are not sure how it will continue with Corona. After the last bad experiences with all the cancelled shows, we don't want to get into the same situation again. It was a lot of work booking all the shows and it was disappointing when all got cancelled. We are waiting if we get invited to shows or festivals and these six shows booked.

I hope that you will also come to Germany. Then we can drink a beer together. I remember when I was in Denmark that the beer was incredibly expensive. Is that still the case?

J: It depends on what kind of beer you would like to drink (laughs). You can easily get drunken drinking very cheap beer, but they taste like cheap ones.

Okay, but I mean beer like Tuborg or some other tasty stuff.

Wow, that's a lot. This is the reason why I always say that I don't want to spend my vacation in Scandinavia, haha!!! Which bands from Denmark can you recommend?

R: Lipid, we were playing a lot with, Persecutor, Demolizer, all these thrash bands we've been playing with and Arch Angel.

J: That's a Danish punk band with former members from Impalers, also a thrash metal band. Of course, Artillery, but I guess you know them. We don't have that many old school thrash metal bands here in Denmark. I think one of the most overlooked Danish bands we ever had is Iron Fire. It's power metal / heavy metal. They released ten albums and many people in Denmark know them, but they are not a big band. I think it's a shame because they are doing great music. Going into black metal, we have Denial Of God and so many other bands at the moment; you can say we have a wave going on for the last 5 years. There are a lot of atmospheric black metal bands at the moment, and one band I adore but split-up is called Blodfest, really harsh black metal and the other one is Likfaerd, also aggressive cold black metal stuff.

What are the five albums that you think you can't do without?

Do you have any words for our readers?

J: We hope that we can visit Germany later this or next year, but I guess next year is more plausible. I hope we can manage to get some festivals, too, that would be cool. Thank you very much for the interview, Michael