German Temple Of Dread from the lovely North Sea coast has recently released their third album "Hades Unleashed". In my eyes this is one of the best German death metal releases (at least) in 2021 (review can be found here). The trio got even more brutality and technical skills into their music than on its predecessor "World Sacrifice" from 2020. I asked guitarist/bass player Markus Bünnemeyer some questions about the album and the reasons for their unbelievable creativity. 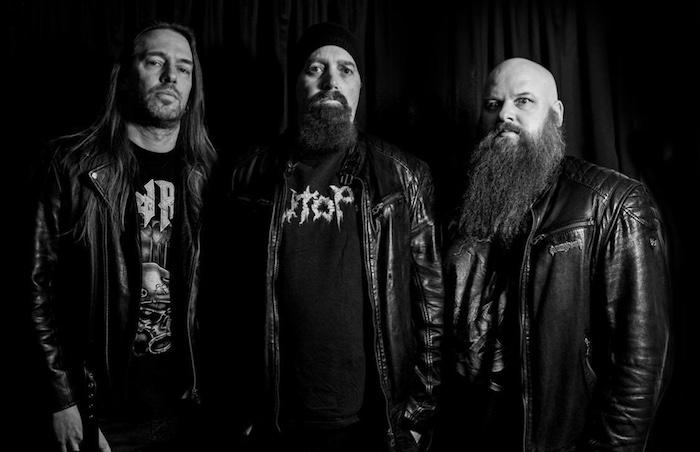 Hello Markus, how are you?

Hello Michael, thank you very much, all is well. I'm in an extremely pleasant post-release phase right now! (laughs)

You have been received quite euphorically in the metal press with the new album "Hades Unleashed". Did you expect so much positive feedback?

While composing the riffs for Hades Unleashed I had the feeling a few times that the finished songs could develop into quite crashers. But I didn't expect that Jens with his vocals and Jörg with his drumming and especially with his production could get so much out of the songs. When I heard the final result for the first time, I was completely flattened and absolutely thrilled. So, I'm not completely surprised - but I'm even more pleased - that this is also seen by the critics and fans.

How did it come about that you were already at the start with the successor just one year after the second album "World Sacrifice"? Did you have so much boredom?

Personally, I rather wonder why certain bands take several years to write and record their albums. Temple Of Dread has an incredibly productive and goal-oriented way of working. I write songs for myself first and then prepare them accordingly for the others in my studio. Jörg and Jens then think about their parts and certain arrangements. Finally, we go through the recordings in 2-3 weeks. Of course, it is also a great advantage that Jörg is the owner of Soundlodge Studio.

Jens sounds more aggressive on the album than ever. What did you do to him to make him sound like that?

Beer withdrawal! (laughs) Seriously, Jens has been able to improve his technique incredibly and feels increasingly confident on the mic (he's actually a guitarist in Slaughterday). He puts an incredible amount of emphasis on phrasing, pronunciation and accentuation. On top of that, he just has an incredibly cool voice that fits Temple's style perfectly.

Musically you are much more complex than on the two previous albums, one can also hear more influences than the usual death metal influences, for example Voivod or Kreator. Was that intended from the beginning?

I always go part by part when writing the songs. When I start with a riff, I usually can't tell if it's going to be a fast, simple song or a more "tricky" one. I experiment a lot with different beats and of course sometimes I think - "Hey! Here a Kreator part would fit well!" I also like the slightly offset and weird-sounding harmonies brand Voivod, which you can find in the DM sector more often with Pestilence.

How did you come up with the idea of using Greek mythology as a basis for the lyrics?

It's not so easy to come up with lyrics that are not completely worn out. We simply don't like anti-religious, mass murderer, Sumerian, ancient Egyptian, splatter or gore themes. Greek mythology is teeming with cool creatures, places or stories. Expressions like Acheron, Hades or Necromanteion are death metal in pure form!

"Hades Unleashed" was traditionally recorded in the Soundlodge Studio of your drummer Jörg. Was there ever any doubt about it, or is that a fixed institution for you, come what may?

There is and never was any doubt about that. Jörg is the best death metal producer in Germany and also our drummer and friend. Furthermore, recording with him is completely uncomplicated. As long as HE doesn't want to record in another studio, we certainly won't change anything.

You live on the North Sea island Spiekeroog. Outside the vacation season, it's pretty, let's say, tranquil there. What do you do there? Writing new songs?

For example! But I actually also enjoy the peace and solitude here on the island - even in lockdown. I'm interested in nature, go fishing and bird watching. I've lived here for 21 years and have actually hardly ever felt bored.

Can we expect your fourth album next summer?

At the moment there is a problem of a completely different kind: the vinyl pressing factories are completely overloaded and have announced lead times of almost a year. Even if we had a new album ready in spring, we probably wouldn't manage to release it next year. Nevertheless - or just because of that - I'm already working eagerly on new songs.

What about concerts and festivals? The fourth wave of Corona throws a lot of plans into confusion again, but are there any events in the near future?

Temple Of Dread have not played any live gigs so far. This is due to different problems, for example our activities in other bands and my "special" place of living. So, we are hardly affected by the pandemic. If the vaccines work only rudimentarily as well as reported by the experts, however, more normality should soon be able to take place again in most areas. Let's keep our fingers crossed.

Have you actually tried the gin I have recommended to you???

With salicornia and sea buckthorn??? I prefer to stick to beer ;-)

I am incredibly grateful for the positive reactions that fans and critics have given us in the past two years. Temple Of Dread stands for uncompromising death metal and will stick to this also in the future. Further development yes, effeminacy no! Keep us in your ear!