On 14th of May Black Liturgy Tour visited Gdańsk and I had the pleasure to see it live at the Drizzly Grizzly. But before Hore (project of various famous musicians who prefer to stay anonymous), Redemptor (awesome technical death from Poland), Inferno (Czechia), Diabolical (Sweden) and headliner Batushka (the Krysiuk's one) took to the stage, I had an opportunity to catch up with Carl Stjärnlöv, the creative force behind Diabolical's awesome releases over last 20 years. Even if the sound wasn't as good as in 2019 (when I saw them in Proxima in Warszawa) as I almost couldn't hear the samples with choirs and keyboards, the band gave a fantastic performance with all members delivering pure perfection, including guest appearance of Pavulon on drums. I can definitely recommend watching them live, as it's always an amazing show, even if the guy behind the sound console is not a fan. While we await their next full-length release this year (which will include 'Transformation Hell' track which was played during the tour), you can read what was happening over the last 3 years in the Diabolical squad below. 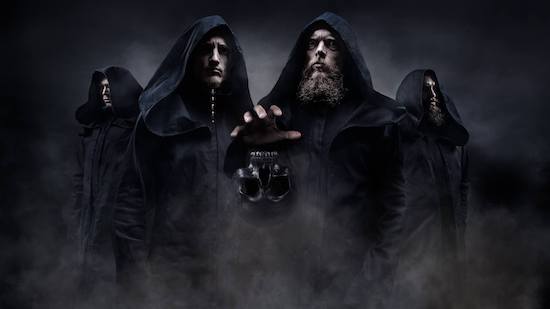 So, the last time we saw each other was in 2019 when you were on tour with Septicflesh, Krisiun and Science Of Disorder and a lot has obviously happened since then in the world and in the band, but let's not talk about the bad things. On a positive note - you have already toured with Batushka once, and you have had the Samael tour as well. Can you tell us more about it?

Well the previous tour was very good because we had such good timing. We managed to tour between lockdowns because things started to open up for a while last year in November so there were not so many restrictions. We were able to travel to different places and do all these shows for about a month, and then on the last week of that tour, the countries started to have restrictions again. We had one show in Holland where people were seated, hopefully that was the first and the last time. There was only one show that got canceled and we were able to reschedule the rest. So we were lucky that we were able to do shows at that time as people were hungry for concerts, and there were more people than usual so it worked out well. It was a success because we've got such a nice camaraderie with Batushka, they are some of the most amazing people I have ever toured with to be honest. And they are of course Polish, and I speak a little bit of Polish but I'm learning, (and here Carl starts speaking Polish) I'm learning, we've been touring with Batushka for a month now, we've gained a lot of exp and my Polish has leveled up. Unfortunately I think I do not speak Polish that well for the interview, but I do speak it on a daily basis (and we're back to English now - MW).

When you were on tour with Belphegor, did you go on stage before or after them?

It was us, then them, then Batushka.

So there must have been a lot of cleaning up after their show?

Yeah, exactly, but everything on that tour went super smooth actually. There are always challenges on tour. For example on this tour we had a problem in Turkey, we had to stay 8 hours at the border to get in, and 8 hours to get out so we were super late getting there and getting out to the next show but we managed. We have a super good crew who is also one of the best I've ever worked with. They are kind, hard working guys who save our asses everyday.

How did the idea come about to tour with Samael?

It was offered to us by the booking agent, District-19, who contacted us and asked us if we wanted to do that tour, and of course we said yes because Samael is a great band and we are fans of theirs. I'm a little younger so my first experience with Samael was actually with the "Passage" album, not the older stuff, and Paul from our band is also a huge fan. I actually have toured with Samuel before, that was back in the stone age in 2009 so 13 years ago, but back then I was playing in another band named Devian, so I already knew they were cool, down to earth guys so I was looking forward to it.

You mentioned Paul who is your new bassist, you basically took him from Sodomisery?

He's not entirely new, he's been playing with the band for a couple of years now, almost 3 years now. He was a friend of ours that we got to know because he offered to book us a tour in Romania some years ago. He was sort of a tour manager and back then we had a situation where we needed a session bassist for a few shows and we asked him because we knew he played bass. Initially he said no because he was our tour manager and that would have been too much for him at that point because he had so much responsibility, but later on when we asked him again, he really stepped in on that Septicflesh tour and he's been with us since then.

And it's not your only connection with Sodomisery because Harris also is filling in on some tours?

All of those guys are friends of ours. Both Paul and Harris are a part of our circle of friends and actually, I've known Harris even longer.

Sodomisery also released a great album - I've reviewed it and Sverker was also working on that album. Were you ever thinking of touring with them?

I think we probably discussed that, but you're not always able to choose who you tour with. There hasn't been any opportunity to do that kind of thing so we booked our own tours, it's always hard to find the bands ourselves. But of course with them being friends of ours it will save a lot of space on the bunks.

And in the meantime you've been doing some painting - is that artwork going to be used on the next Diabolical album?

I'm always doing the artwork for Diabolical as I've done since I started with the band. It's convenient because I know how to do it and it saves a bit of money. Along the way I've developed my skills so I do all the album artwork as well as the designs for t-shirts.

How far are you with preparing the new album?

We have new material recorded. You can say we are in the mixing phase and there are still some small things to record but overall most parts are in place, so we will be releasing it pretty soon. We don't have an official date yet.

But will it be this year?

Will the new album have a theme as "Neogenesis" had a proper story as well as "Eclipse" did?

I think it's going to be more loose in terms of overall concept but I always try to find some fun twist to it such as making a book or a concept album. I've been planning to do some painting for the new material as well. I think I'm going to head in that direction with the new material, make an artbook as opposed to writing a book as we did on Neogenesis. I think it will be more personal as well because that just felt like the natural thing to do this time, I was painting a lot during the process so that's where my head space is.

I understand you are usually the most creative person in the band when it comes to deciding what Diabolical is going to do next?

Well, Diabolical is more Sverker's child actually, I'm the stepfather who stepped in. I've been in the band for 20 years, so we sort of have more shared custody these days. There is an open space for ideas for whoever wants to contribute, Sverker was kind enough to let me do crazy stuff throughout these years but it's a joint process. We discuss our ideas and everyone gives their input, in the end Sverker is always going to have the final word but generally it always goes over smoothly as opposed to some other bands. I think it's that northern Swedish mentality of not having any ego. I have done everything I've wanted to do creatively to prove myself. Sometimes I'll even give someone credit like "that riff or that part you did is fucking awesome" and they'll go "you wrote that part".

Does Sverker have any technical novelties that we can hear on the new album, which weren't used before?

He's always upgrading the equipment he uses, but he sort of established the signature sound, so even when we switched studios several years ago now and he built his own studio and the quality became better, you can still hear those signature sounds. Every producer has their preference of how they want things to sound, but you would have to talk to him about this.

By the way, congratulations on the 25th anniversary of the band, last time we talked you mentioned something planned for that occasion. Are any of these plans going ahead? Anything special prepared to celebrate?

We had to throw quite a lot of these plans out the window and some things didn't go as we hoped for, then it stopped being priority because the tour with Batushka came up last year so other things were more important than that.

To wrap things up - is any material from the upcoming album ready enough to be played on stage yet? Are we going to hear some of it tonight?

Yes, we have a new song, which is probably going to be the first single. The title is 'Transformation Hell' and we have a guest artist on that song as well, very talented Swedish electronic music vocalist Livmødr, she's singing on that track. We performed with her on stage in Stockholm, we couldn't take her for the entire tour, so her voice will be played from the sampler. I hope that people will enjoy it, we even played it on our tour last year, so we're getting pretty confident playing that song already.

Any plans between this tour and another tour with Samael?

Yes, we'll be in the studio.

Awesome, thank you very much, I wanted to give you early birthday wishes, enjoy the show and hope to speak to you soon again!