Metal music must be very therapeutic. The people playing it and listening to it seem to be very calm, polite and very nice to talk to. Or maybe that was just my experience at Mystic Festival that the bands I was talking to were very easy-going, all in good mood and without the time constraints each interview would probably take much longer. Déluge plays quite different black metal, or as the main man behind their music, François-Thibaut Hordé, likes to describe it, "untrue black metal". You can hear the usual French stamp on it, but they are something different. But there's no better way to find out than to listen to it, so put it on in the background and read the main composer's comments on the creative process, live shows and future plans for this almost-10-year-old band (you're welcome, François :-). 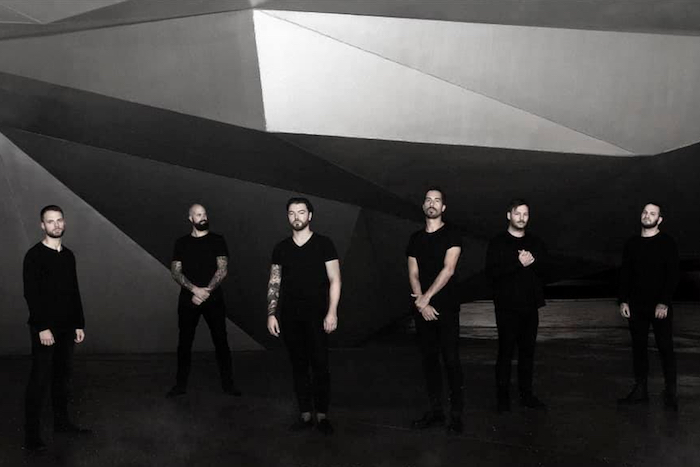 So, first of all, thank you so much for your time. I am very glad that you agreed to do the interview. When it comes to Déluge, I wanted to start with the general observation that recently there's quite a big black metal scene forming in France. There are more and more bands coming in with different labels, like Les Acteurs de l'Ombre for example. I have heard some of your interviews before where you like to call your band untrue black metal. Can you please say a bit more about this?

In the beginning it was some kind of a joke, but I noticed that it could define us because I am not from the black metal scene myself. I love the primitive energy of it - the visceral blasting energy, and I wanted to create something different. Something more than that, and that time I discovered true black metal, Norwegian black metal, and I thought untrue black metal could be cool.

What is actually making that difference? What makes Déluge different to black metal or other untrue black metal bands?

Its chords are really melodic, we use a lot of light, it's not dissonant. The chords are beautiful, the blasts are here, so you have the energy of the black metal but I wanted to do something else.

It's a bit complicated to write at the moment, I have a few pieces and I haven't put them together yet but it's mainly 3 songs. But I think I'm going to do it one by one, not as a whole piece because it's going to be too complicated. The creation process now is a bit different, I need to do it piece by piece and put it together but I don't really know. I have a few ideas but it's not set at the moment.

It looks like you are one of the lucky bands to keep the same line up, how does that impact the creation of the new album?

Pretty much I compose everything, about 95% and when we put all these things together, someone might come up with an idea and it would be nice. I don't know if it's going to be the same for the next one. Honestly today is going to be the last gig on this second album, after that we have our next festival next year in Sweden. But for one year we don't have any shows so it's going to be the time for us to write, and I will put it together in the next months.

On the second album you had some interesting guests including Tetsuya Fukagawa (from Japanese post hardcore band Envy - MW) - when you were writing those tracks, were you thinking you needed some extra input from the outside to make it complete?

Totally, the song was working by itself, we had one listen and it came like wow, we should have something like Envy.

How did you meet?

Actually I can't remember but I think we met at Hellfest in 2015 just like this. We kept in contact and then I asked him and like 5 years later it was like a spontaneous meeting.

You also had some saxophone on one of your tracks as well, this seems to be quite an unusual choice for especially black metal, and again how did it work out - was it something planned from the beginning when you were writing the song?

Actually, no. I knew when I created the 'Opprobre', this gap in the song will keep a place for something else. It wasn't exactly planned for saxophone but it came out like it will be super nice and Matthieu Metzger, the saxophonist, is a good friend. I've been on tour with him in 2012 and it's funny because he did albums - metal albums with saxophone so it's completely different because he sent us one piece and asked if its okay and boom, on the album.

When you are on tour, do you try to keep the whole album as it is and then play it as a whole live or do you like to mix things up?

We mix things because an album is an album and life shows are a bit different. There are some parts that won't work live, it could be something else that we don't want to do now. But we mix both albums live, I would say about 50/50.

Do you make any changes to your arrangements of your songs just for the stage?

That is a good question. Yes we do for the needs of the show.

Do you have any specific items that you bring on stage? What is the scenery on set?

Super simple, only us and our instruments.

What kind of instruments do you use? Are there different guitars that you use, do you use the same equipment at your shows?

Yeah most of them. A few months ago we decided to use Kemper amps which is not an analog amplifier. But it works perfectly for the show. I would like myself some more of an organic sound on stage. It's going to be the next work. I play on a Gibson SG series Richard de Mello plays on a Fender Stratocaster or Telecaster, it depends. And also Kemper.

Very classic choices to keep the sound true. What is your plan for tonight's specific show when it comes to that kind of big festival, how do you compare the big festivals to the smaller venues?

The more people there are, the more excited I get. I prefer 8000 people to 80 people. It doesn't happen a lot lately but this is a super nice festival. I didn't know about the festival before, I just knew it by the name but it reminds me of Brutal Assault in Czech Republic.

When it comes to touring, are there any other bands you were playing with before and now you are catching up again with old friends?

Hangman's Chair are good friends of ours. We are on the same agency and we've known each other for quite a few years now and it's always nice to catch up and have a drink or two later.

When you started the band, you were lucky to start live tours with some of the big names like Gojira. How did that happen?

Actually the tour in 2012 was a tour of Gojira and I worked with them as a technician before so they are good friends and in the beginning they had a few tours in our region so they wrote to us and asked if they wanted to be on the tour. I think the first show of Déluge was to open for Gojira in front of 1000 people.

I have to mention that next year you are celebrating your 10 year anniversary, if my information is right you started in 2013?

Do you need a moment?

So, I understand you had nothing special to celebrate your 10th anniversary?

Fantastic! I can't wait to watch your show, it's going to be quite an experience. Any last words to the fans?

It's always good to come to Poland, we didn't know we were liked so much over here, that's super nice. Our bass player (Frédéric Franczak - MW) is Polish, so it's good to be with him here and his dad is from Gdańsk. So it's a nice spiritual journey for him, and I'm super glad to be here. All the best!