Last time we talked Construcdead had an uncertain future; they were on their fourth demo and still no record deal. Now Construcdead are back with their full-length debut on Cold Records entitled "Repent". I recently had a chance to chat with their drummer Erik Thyselius and get the latest on the band's blossoming career. 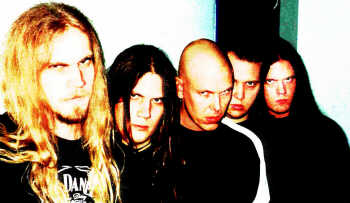 You guys just got back home from the Japanese tour headlined by Soilwork. How did that go?

Time of my life... or the time of our lives. It was great.

How was the crowd response to the music?

Awesome. It's hard to explain because you gotta be there and see it. The Japanese people are awesome. Their responses throughout the gigs and the songs; they were screaming and they were shouting. The girls were going insane and they were crying and I felt like Nick in the Backstreet Boys. It was indescribable. There were girls in the lobbies at the hotels in the morning.

How would you explain the difference between the fans there as opposed to the Europeans?

Yeah definitely, ‘cause the Japanese people have a different social structure, so when bands like us come to Japan I think that they feel that we are a higher class than they are. I think that they see themselves as nobodies and that we are big rock stars but exactly it’s the other way around. There was one time when we were in the record store and we were signing records and there was a girl. She was crying cause I was signing her record.

So you guys are treated like boy bands over there because of your good looks right?

Well that brings me to my next question. How were the parties over there?

Awesome! I actually got free drinks at the bar.

Your album, "Repent", is getting very positive reviews so far. How pleased are you guys with the way it came out?

We had lots of ideas of production and it did not turn out the way we wanted but it turned out to be great anyway.

If you could go back and change anything about the disc, then what would it be?

Well I'd say you still did pretty well regardless!

Yeah, but we had more ideas. I am not complaining. It is a great album but on the next record we are going to do it a little bit different I think. 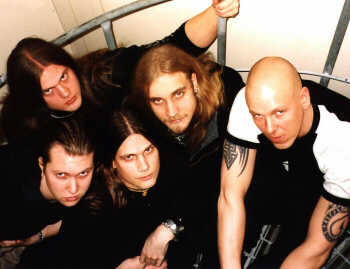 I was a bit surprised when I heard the melodic female vocals on one of the songs. Who supplied the vocals and whose idea was it to have her do it? At first I thought it was a keyboard sample or something.

Actually my sister is an opera singer and the original idea was that she was supposed to come to the studio but she had a couple of gigs in London so she wasn't able to go to the studio. So we had a girl who was going to do it and she was in labor so she was not able to do it either. Then we had to call a friend and she got to the studio at about 11:30 at night or something to do the vocals. It took like two hours or something. It was pretty spontaneous and sporadic.

Most of the music on "Repent" is fairly old demo material, redone of course, but how much of the music was actually written for the album itself?

Do you guys already have ideas for new songs?

We have like three songs already for the new album. We want the next album to sound like 'Metamorphosia'. We want to keep that the common line throughout the whole next album. Know what I mean?

So what your saying is that you want to try to make it more straightforward. Then does this mean that you will spend less time focusing on melodies and go for a more ferocious attack?

I think that the album is going to be more dynamic and production-wise it is going to be a whole lot different. We're going to get help from Peter from Soilwork to help with the production and Klas from Darkane and Terror2000.

You also recorded drums for the new Terror2000 record. How difficult was it for you to do two intense recording jobs so close together?

To be honest, it was a bit hectic. I think I recorded the "Repent" album, the Constructed album, in November. Three days after that I went down to Helsingburg and started the Terror2000 recording, so basically what happened was I had a tape recorder and I listened to the song and I recorded right after that. It was a bit hectic and it was a mistake on my part to do the recordings on such a tight schedule.

Are you still happy with your performances?

Yeah, definitely. I can always complain but I am not going to do that. [Laughs]

The album is already out in Japan and Europe. Any news on a license deal for the States yet?

I talked to the label about a week ago and they had some kind of deal going on in the States with an internet company, so hopefully we will have the album out pretty soon in the States too. We have had a lot of response from the USA on our website.

You guys shot a video for the track 'Metamorphosia'. How was it to make your first video?

Confusing! We did it on a low budget and was self produced. No big casting or no big production. We did it by ourselves. I think it turned out pretty well. We had a couple of cold nights when we recorded the live scenes in the warehouse. Hopefully next time we'll have money from the label to do it. The Japanese people love it. As far as I know that is the only country that plays the video. Actually when we went there, we were able to see it on television.

That must have been pretty exciting!

Yeah, it was. It was kind of confusing. I mean it's Japanese television. It felt like we were at home watching it on video. Confusing... 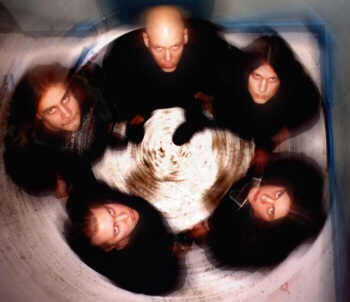 I could not help but see that you were wearing a Soilwork shirt in the video.

Yeah, definitely! I support my homies! Why not? Actually the label was kind of pissed because I had the Soilwork shirt on and I gave them the finger and I said "What the fuck?" I mean they are buddies. They are my best friends.

Do you guys have any upcoming touring plans in the works?

Not really; we are doing material for the next album. We have a small label and they do not have that much contact, unfortunately, to do the tours.

Where do you see Construcdead being in the next couple of years musically?

I know this is far fetched, but we want to have our sound. We don't want to be like At the Gates 2 or The Haunted 2. Hopefully we will have that in a couple of years.

Thanks for the interview. Do you have any words for the fans or maybe some advice to metalheads out there looking for a great thrash record?

Definitely you should check out our "Repent" album and visit our site www.construcdead.com, stop by www.terror2k.cjb.net and check out the new Terror2000 album. It's a killer!