Bursting onto the progressive scene circa 2003 with "Ripples in Time," Chrome Shift has been steadily making some waves with their brand of technical prog metal and addictive song compositions. If you are a progressive fan, you have possibly noticed the quality material from DVS Records and Chrome Shift has no doubt caught your eye. Otto Schüett, founding member and guitarist of Chrome Shift was all too happy to depart surplus information on "Ripples in Time" and their upcoming European touring. 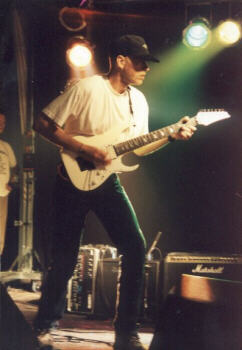 Congratulations on "Ripples in Time." I am very impressed with the record, and it has been receiving quite an amount of playing time recently. You guys must be stoked with how it turned out, considering it is a debut record.

Thank you! Yeah, you are right! Considering that the record was made primarily for ourselves and friends to document what we had been doing for some years in the rehearsal room, and was done so for the prize of a good guitar amp in the run of 14 days, it was a surprise really, both that we got a record-deal so quickly and that we have received a huge amount of fantastic reviews so far.

Earlier this month Chrome Shift played at Sweden Rock 2003. How was it? How did your expectations of Sweden Rock differ from what the reality was?

Well, being an unknown band, we played at a time where most of the audience was sleeping it off, so it was kind of surrealistic playing on a monster stage with only a few hundred people in front. But, really, it was what we had expected. But then again, everyone we met was very friendly and enthusiastic, so it was worth doing it.

I must admit I have not heard too much about this festival. Is this a mainly progressive music festival? What other bands were on the bill for 2003 that you played alongside?

I must admit that we were only on the festival grounds for a couple of hours as we had a long drive home. As far as I experienced Sweden Rock it was a festival for classic heavy-rock and metal bands, with a few exceptions, us being one of them. I got to hear a little Talisman, Sepultura and some metal-bands unknown to me. I know that Queensryche, Whitesnake and Twisted Sister, as well as some other well-known bands were main acts. As a whole it was very well checked and very big (four stages with music simultaneously). Fantastic weather too!

How did it all begin for Chrome Shift? Did you guys have any background in the progressive scene before forming Chrome Shift?

The band was co-founded by JC (bass) and I, after our previous band Shane had dissolved – that must have been around 1997. After looking for musicians without luck for nearly a year or so, we made contact to Poul (drums). That was in many ways the most crucial decision for us. We wanted a no-limits drummer, and that was what we got. Jakob was the next guy we contacted. In my opinion he is the real sensation in Chrome Shift. So the first years we played only instrumentals while looking frantically for a singer. In Denmark it's almost impossible to find someone wanting to try his talent out on the kind of music we play. But then, at last, Rasmus was found. 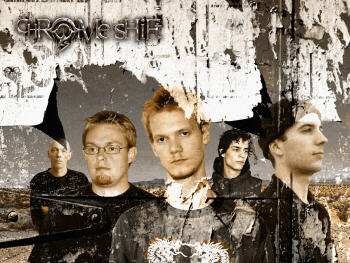 From a metal standpoint I haven't really heard a lot of music coming out of Denmark. Do you guys have a good music scene in Denmark?

If we are talking about prog-rock or heavy metal we have a lot of would-be bands, but no scene and no audience at all. Concerning other music styles there are a lot of very good musicians, a lot of good bands. Generally speaking I think it's like other countries: the market is flooded mainly with music that appeals to those who have the money, you know?

How hard was it to put together a band like Chrome Shift in such a small country like Denmark, which like every other country is universally subject to mainstream music?

After being involved with heavy rock and the like for many years I must say that the existence of Chrome Shift itself is a little wonder, finding the right musicians took years and keeping the band together for years without having any possibility of getting the music out one-way or another. And it is still very complicated to get the band together to practice. We live far from each other and are involved in a lot of different things...

René from DVS Records is obviously a big fan of all things coming out of the progressive rock/metal field. How important is it for you guys to be associated with a label that really enjoys your music, as opposed to a company that might just be in it for the money?

Well, I met René for the first time at Sweden Rock. We have a very good contract with DVS and he has been friendly and supportive all the way – it is much more than we could have hoped for just a year ago! It seems appropriate to be with a record company that is foremost interested in bringing out new bands – we're in the same boat so to speak. So, until now, there has been no pressure.

You have two non-English tracks in both Danish and French. One is about a dead astronaut and has something to do with the time or life of an assassin. Is this correct?

'Kosmonauten er død' (it means 'the cosmonaut is dead') is one of the bands first songs. A real chrome-shifter, grown in the times before we met Rasmus! Here Jakob really sets the cinemascope! The title refers to a note I found about the burning-up of a Russian cosmonaut in space on his way back to earth. It's that kind of feeling, or is it? The other is 'Les temps des Assassins.' This one is my responsibility. It was inspired by the happenings around the World Trade Center. Sometimes I simply have to go against the grain. What is it that makes men go to death open-eyed? Any man? Any idea? How can one be so desperate? So weak? So strong? If the lyrics provoke – that is what they're meant to do!

In a broad sense "Ripples in Time" is about time travel, space and darkness. I don't think this topic has really been explored much in rock/metal so much before. It seems to carry a sort of a science-fiction theme to it. Do you guys have a personal interest in these subjects?

Yeah, you are right, that's science fiction. Jens, our bass player, who wrote "Ripples in Time," has a knack for those kind of things. That we have two tracks concerning space is a coincidence, though.

The four tracks that make up 'Ripples in Time' is obviously one of the biggest talking points of the record. How did the writing process differ for these four songs than the rest of the album? Did you write the songs with an idea that they were going to form part of larger group?

Well, originally Jens wrote the first part as a stand-alone piece. But somehow along the way he considered there was more to the basic idea – the last 3 parts were finished just in time to make it to the record. 'Ripples...' differs from all the other tracks in the respect that it was finished and not worked on in rehearsal as most of the other songs. There was simply no time to work it over if we wanted it on the record. 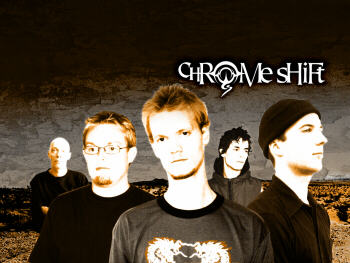 Are the themes from the 'Ripples in Time' section vastly distinctive in relation to the rest of the album, or still a continuation of the themes that were present on the other 8 tracks?

As stated above, somehow 'Ripples...' is different from the rest of the songs and has no inner relation to them. Musically speaking it relates though, as Jens has supplied a large part of the musical ideas for the whole album. It's the same source.

You guys are on the bill to play ProgPower in October. You must be extremely excited at the prospect to get your music out to a larger audience!

Yes! Our appearance at ProgPower will be part of a tour, which we are planning at the moment. All this is very new to us and we really look forward to getting into the routine of being on stage and playing to different audiences. Also being together as a band for more than a day will be a new experience.

What looms on the horizon for Chrome Shift? Surely, following ProgPower it must be time to start thinking about a follow up record for "Ripples in Time"?

Well, we have yet to see if our record sells, but I think we are ready for the grand ball, if that should be so. I know our record company and our management has a lot of plans for us. So, basically it's the same as always: we are working on a lot of new music (at present time we already have enough material for the next record – a lot of it we already play live). We surely hope to get into the studio again this autumn, if possible with a little more money than last time.

With "Ripples in Time" being a reasonably successful record in terms of media reactions, do you feel a great deal of pressure to up the stakes for your second album?

No, I don't think so, no at the present, anyway. I'm very optimistic about the future, as I think we already have a lot of dynamite material ready. It will be very diverse, just like the first record, but in terms of technique and musical content it will be more adventurous and daring.

Thanks for taking your time out for this chat, man! I greatly appreciate it. Good luck with the future, and I am eagerly looking forward to seeing you guys come out with a record that blows away "Ripples in Time"!

Thank you for you interest! It's a new and uncommon feeling suddenly to be of interest to a lot of people, to share their good will towards our music, and to get some confirmation! That's surely the best motivation to keep working with the music despite a lot of practical, especially economic problems. And yes, you can look forward to something special the next time!