When I think Sweden, I think metal, and when I do that, the first thought that comes to mind is the endless list of bands playing melodic death metal. However, not every metal band that hails from Sweden has to be part of that over-saturated scene. Cult of Luna is one of those exceptions. Instead, they’ve replaced heavy riffs with even heavier – and darker – rhythms, and solos with far more beneficial melodies. To help explain some of the mystery surrounding Cult of Luna and their constantly growing popularity, I talked with guitarist Johannes Persson in order to shed some light into the dark halls where they come from. 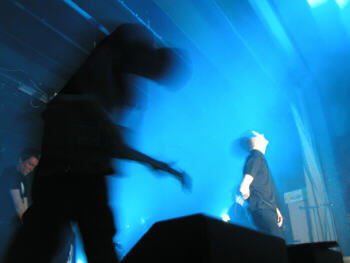 Yes, I am pretty tired off that question because I don't seem to be able to give a good answer to it. I‘d rather not answer it but if I have to I would say that our sound is dark, heavy and dynamic.

"The Beyond" is your second release. Are you happy with the outcome of it? How is it an improvement over your debut, and how did you guys go about refining the sound of Cult of Luna for the second release?

We all think that "The Beyond" is much better in every way possible. The first album felt like a bunch of songs that we tried to mold together to be as good of an album as possible. On "The Beyond" we wrote it as an album and because of that I think that it sounds much more dynamic than the first one. It also made it possible for us to improve thematically which was impossible before when we concentrated on each song and not on the whole picture.

This is your first release for major metal label Earache Records. How has that been for you guys?

It has been a privilege to work with such dedicated people and we are very satisfied so far. We feel respected by the Earache staff and they seem to be genuinely into us. Working with a bigger label can be harder some times because of all the compromises that have to be done, but in the end it is worth the price.

Where did the name Cult of Luna come from?

It is the name of the cult and its origin is irrelevant.

Does "The Beyond" have any sort of theme that it follows? What are the lyrical concepts you guys go through?

We have a general theme in the album but we will not reveal it because we want people to be inspired to do their own thinking and come up with their own interpretation of it. We have gotten many suggestions from fans and journalists but to be honest, we don't care if it is the correct answer or not. The important thing is that people have made some sort of independent thinking, one thing that is not very common these days. If you want a clue of the theme you should read the opening quote and listen to the end of the album and then do the math.

I know that when Cult of Luna started out, you guys didn’t play live too often. Has that changed? Are there any other tours coming out in support of "The Beyond"?

When the first album was released we where already pretty tired of the songs so we decided that we would rather concentrate on writing a new album then go out and play songs that we didn't think were good enough. Last year we played five shows and four of them were in December. Hopefully we will tour much more this year and next year. 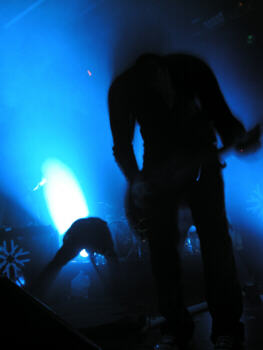 Are there any other bands from Sweden that have a similar sound to Cult of Luna?

No, not really. We are pretty much alone here. A few projects have popped up but none of them have been any good. Breach was a good band that played a kind of similar music but I don't think that they are around any more. Another band that is worth mentioning is Switchblade, which started out as a Locust clone but have through the years and evolved into something original and interesting.

I’m sure you’ve heard numerous times comparisons between Cult of Luna and other bands. Tiring or not, it’s impossible not to notice the similarities between you guys and bands like Neurosis or earlier Isis. What do you think about that? Did such bands influence your sound? If not, who or what has?

We have gotten that comparison a few times and it's beginning to be quite tiring. Yes, I recognize that the question is not entirely unmotivated but it feels like an easy road to take to compare us to those bands. It feels like Cult of Luna, Isis and Neurosis play in the same league if you will but I also think that each band has its own soul that separates us from each other. Don't get me wrong, I have nothing but respect for both Neurosis and Isis, they are both great bands. We did a few shows with Isis this spring, we had a great time and they were really good both off and on stage. When I write music I have tried not to be influenced by any other band but it is impossible at least on an unconscious level. On "The Beyond" I tried to capture the feeling a get from watching movies like Bladerunner, Alien 2 and futuristic movies similar to them.

As far as composing "The Beyond" goes, how was the process for that? Individual songs, how are those written? For the whole album, did you try to strategically place the songs and whatnot, or is it just a collection of ten songs?

Like I mentioned in the answer to your second question, "The Beyond" as an album that shouldn’t be seen as a bunch of songs. The songs have a position not because of any coincidence but because of the theme and to get the dynamics right. The writing process varies from song to song. Sometimes one of the members comes up with a complete song that the rest of the band refines and arranges and sometimes we just jam out a song out of a riff, sample or anything.

I am sure that we are not a band that is interested in just writing angry songs. Our only motivation is writing interesting songs that make people feel and think. To do that we elaborate with emotions and moods, anger is just one of the emotion that we use. 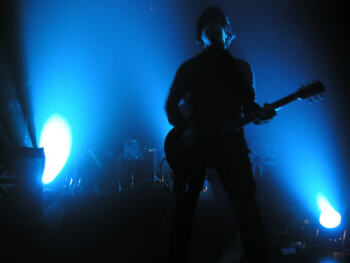 What is there to expect from Cult of Luna in the future? I assume another album is being planned, or will be eventually?

Right now we are discussing future albums and we have big plans for the future. Whether or now we will be able to pull everything off or not is a completely different question. The only thing that I can reveal is that we will try to evolve even further thematically.

What should we expect? The same sound, or will Cult of Luna introduce new elements or styles?

We don't want to stagnate and are always trying to find new ways to improve and evolve our writing. We have started to write new songs and have already introduced new elements to the Cult of Luna sound. Some people will hate it and some people might like it but we don't care either or as long as we are honest to ourselves.

That’s all the questions I have. Thanks for your time and nice work with "The Beyond"! Any last comments?

Thank you for the questions I hope I have given you good enough answers. Since most of your readers will be American citizens I want to plead with them to not believe their leaders and try to do your thinking for yourselves. There are good and independent sources of information if you look deep enough and look past the mainstream media.