<Others may come and go, but Pandemonium, the Veterans of Polish Underground Metal, simply always ARE. And now, their newest creation "Misanthropy" is quickly becoming an album to be reckoned with. Paul (vocals and guitar) brings us closure about what is behind the band and their music. By Arek 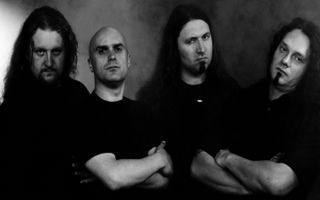 Greetings Paul. My first encounter with you (Pandemonium) happened about 20 years ago right after very well received gig in Hajnowski Dom Kultury when we were enjoying some brew in the vast forests of Puszcza Bialowieska. Do you ever go back and reminisce about those times and 90's era?

Welcome my friend! You reminded me of our golden era. In first years of our existence we bombarded everything and everywhere with our music... Of course I go back to those times and I go back often. Those were the best times in history of the band but I must mention here that what is happening right now makes me very optimistic.

Tell me something. After all these years, obstacles thrown at you by faith or yourselves, where do you get all the strength and energy to continue to proudly walk the dark path of Black/Death Metal?

We get the strength from the feeling of righteousness in what we do. It is a kind of this mystic energy that we are immersed in. Unique and one of a kind cosmic force. This is parallel universes and constant evolution in both musical but also metaphysical form. It's a necessity of expressing ourselves in an answer to the 'holy' garbage that we get served and with which I do not, WE do not, agree... this way we do not lose ourselves in this sad pigsty of a nowadays-world we live in and we spit in the faces of all assholes.

We can read about your musical endeavors in biographical notes of Pandemonium and Domain. They are rather rich and to cover all of it I'm afraid we would bore our readers tremendously (laughs). So this is why we are only going to focus on your newest act "Misanthropy". It is a very dark album in which misanthropy almost pours out in every note. Who deserves to be called mother and father of this creation?

"Misanthropy" has many different fathers just like it could be called many different names. It's a perfect creation. Essence of Darkness and art divine. It's a cult material worthy of its predecessor "Devilri". It is an heir to its protoplast- master, emanating with freshness, mysticism, untamed dimensions and monumental construction. We could say much, much more about the album but bare words will not give away its character. You need to get to know "Misanthropy" throughout and delve into it completely.

Most of previous albums were recorded in Serakos Studios in Warsaw. Tell me what made you choose ViriamArt Studio of Piotr Tyszkiewicz and how much or on what level did he get entwined into work on "Misanthropy".

After great many conversations within the band and then with Piotr Tyszkiewicz - owner of ViriamArt Studio - we came to a conclusion that it is the time for a change and we are going to record "Misanthropy" with his company. All in all studio, location, equipment, atmosphere and professionalism of Piotr Tyszkiewicz proved to be an excellent choice. We were guided by an invisible hand and finger of God himself pointed us to this place. It's like I had a studio in my disposition. We could do all necessary corrections, suggestions and changes right away. Much good came out of it and I must say that many interesting technical innovations were suggested by Piotr. His help was tremendous. 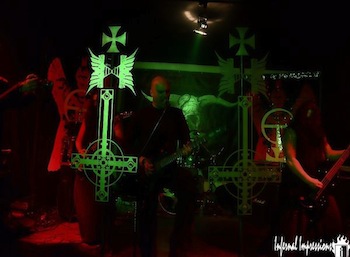 Except for the sound engineering from Piotr, there were a few more people that left their unholy fingerprints on the musical shape of the project. Can you tell us who they were, what input they had on the album and how did that collaboration come about?

Collaboration with Androniki Skoula started at the exact moment of Artur Urbanek and Grzegorz Fijalkowski suggesting the idea. I agreed to it and work started full speed right away. It paid off in every aspect. Mail or e-mail collaboration with Androniki worked out exquisitely. First I've sent mp3's to her with the guitar and drum parts and then she delivered few of her versions which simply floored us. We had a tough bite to take in what to choose and how to plant her vocals in our compositions. There were so many vocal parts that were simply mind-blowing. At the end we leveled all the parts and "Misanthropy" and "Stones Are Eternal" sound genius thanks to Androniki. Second person to kick everybody's butt was Tomasz Kubica from Arkona. He created many atmospheric parts, ideally fitting intros, outros or inserts. He felt the music 100% and understood our intentions and spirit accompanying creation of "Misanthropy".

The wind of time slowly but surely blows the last hairs from our heads (laughs) and all the years allow us to walk tall and entwine our spiritual life with the pure existential form. How does it look in Pandemonium since we all know that neither "Father Director" nor "Mr. President" are supporting the band.

The band supports itself. Studio, promotion and such things are being taken care of by Gods ov War Productions and Pagan Records. Without such tremendous support there wouldn't be much. Realistically speaking, I'm beginning to notice something like a duty, mission or service. As long as we've got something to say, on many different levels - we will say it, we'll state our position. The most important thing is to open eyes of non-believers and to prove to ourselves that there are no impossible things. Through Pandemonium, each and every one of us has created their own style of living; far different from the way other, "normal" people live. I guess that's the main idea behind it.

How do you guys deal with and intertwine all everyday must-do's with music duties? I suspect there was much that changed after the release of "Misanthropy".

Once everything is thought of and organized, with the right people around you - like I said it before - there is nothing impossible. Good organizational skills and correct planning takes care of everything, you can even direct concerts to fit your schedule. We are lucky that creating of music, the realization of it and all the rest in or case is no poor math. 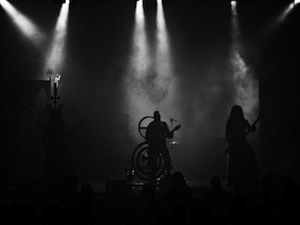 After the release of the album and first few shows, how would you grade your cooperation with Pagan Records?

In my opinion it is way too early to discuss the matter. First two months of our participation in Pagan Records mission, I would grade it very high. Everything shows that we are going in the right direction. Nonetheless, we have to allow for Tomek Krajewski to do his part, Gods ov War to do their part and for us to do OURS. I expect to be able to tell you much more in about 6 months.

I have a huge sentiment towards the hard times of the 90's and I would like to ask you to retrospect on the Polish metal scene back then and right now.

We all remember first steps of Black/Death metal in Poland and in the world. We were lucky to be able to help create it from the beginning. These were the times of truly enthusiastic participation in the idea. There were a lot less bands - which, in turn, I believe it helped the scene. People weren't overfed with music. Unfortunately, nowadays, we have to deal with "musical overpopulation of the planet".

Material from "Misanthropy" was complete and ready last year - so here is a quick question - is there new stuff in the works? Hope you're not going to make us wait for as long this time...

New music slowly grows in our minds. It is definitely too early to talk about that. New material of Pandemonium will see the light of the day when the time is right. I don't think we're gonna have to wait for a new album for as long as we waited for "Misanthropy". On the other hand things of genius take time and there are long hours of labor and pain.

Thank you so much for your time Paul. Hope to see you at the concert somewhere.

I also thank you for the time. Stay with us and we'll see you - either in this life, or on the other side.