Part prog, post something, a hint of doom and all original. Eight Bells made an instant impression with their debut 'The Captain's Daughter. With their sophomore effort 'Landless' they have refined their sound and made one of the top releases of 2016. I recently had the opportunity to sit down with guitarist/vocalist Melynda Jackson to talk 'Landless', a tour with Voivod, broken legs, line up changes and future endeavors. 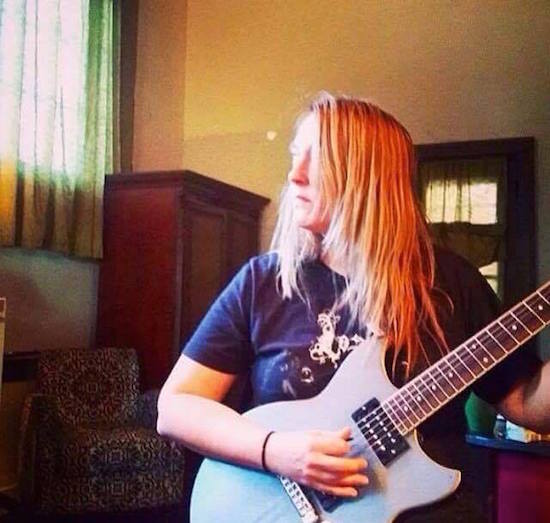 How did Eight Bells come to be? Who are some of your influences?

Eight Bells the band got its name from Eight Bells the final SubArachnoid Space album. I had worked tirelessly on SAS for a good 10 years or so when we started Eight Bells. Maybe even longer as the first SAS album came out in 1996 I believe. I wanted to do a band that was a little less 'out there' and a little more aggressive. I didn't feel like the Neo psych genre had necessarily ever been very appropriate for the material especially after Mason's departure. We were not simply doing pop structures with delay - we were doing scary sounds a lot of the time, and had basically shunned traditional song structure from the beginning - when we had a structure. Mason Jones, SAS founder, decided to call it quits but encouraged us to continue without him. We managed to get two albums out after his departure: The Red Veil, and Eight Bells. I wanted to name the new band Eight Bells to give a nod to the legacy of SubArachnoid Space and where Chris and I came from. That band was super important in my life for many years, and I learned a TON from having stuck with it for as long as I did, but really needed a change. It was actually painful to let it go. It was difficult to find a stable lineup once I moved to Portland from San Francisco, but I knew I wanted to continue writing and performing and making albums - and I wanted to try something a little different. We jammed with a couple people and settled on Haley. So that's the story of how EB got started.

What would you say is the biggest difference between 'The Captain's Daughter' to 'Landless'? Sound wise, writing process, recording process.

For years, Billy Anderson and I had wanted to work together on a SAS album so it only made sense to get him for the first Eight Bells record.

The Captain's Daughter had more of a raw feel and was comprised of a bit of unused Subarachnoid Space ideas and riffs in various stages of completion. Chris had come back to Subarachnoid Space after a long absence and Dan Barone had been playing bass for that material when he called it quits. Chris and I decided to start Eight Bells and use the riffs and skeletons we had started working on namely the tracks 'Yellow Wallpaper' and 'Tributaries'. Our agent, Nathan Carson, suggested Haley and we finished the ideas, and wrote a couple more songs. There were no vocals actually planned for that album - but we were happy that Haley showed up in the studio last minute with lyrics and vocals for 'Fate' and 'Technology'. I inspired me to actually try singing on Landless. I had been experimenting for a while yelling into a contact mic through my effects line and decided to make the leap. I had always kept a journal, so using that, I wrote some lyrics and had some ideas about what notes to sing on 'Touch Me', the front end fuel vocals started out as two guitar parts! Haley helped with editing my words to fit and they became vocal parts. It took a while to figure out how to write in my range, and I am still learning. All my lyrics are about boys and pain, btw.

I would say the main differences between The Captain's Daughter and Landless are the addition of more vocals, better production, and more experience working together as a group. We recorded and mixed the former in 8 days total, whereas the latter had a better budget, and so we could spend more time making the guitars sound great with multiple harmonies – like a 'real rock record' haha. The planning for the recording was a bit nuts, as we had a difficult deadline, and I had not allowed quite enough time for everything - I had never had to consider vocals really until this album.

'Landless was released in February while on tour with Voivod and Vektor. How has the response been both to the record and live performance? (maybe if you have a cool story from the road)

We have had a really nice response for the record. On the tour, even when we had sets that were difficult and / or not well played people were supportive. We worked really hard to finish the album so that we would have the vinyl before the tour (we almost made it) So we went out without vinyl. We worked on an impossible schedule. I can't even express how lucky I feel to have had someone like Rae learn our material and then show up and record it with us. There were many hurdles - our drummer Chris getting sick, impossible schedule, limited resources and time, going over budget to name a few. I feel really fortunate to have lived through it haha maybe that's a little dramatic, but yeah it was tough.

The coolest part of tour was when those dudes fell into me and I fell to the ground screaming and then a couple weeks later I found the video I was taking when it happened and could hear myself screaming in in the video - over Voivod. I was loud. Then I listened to it over and over and had to delete it because it was fucking up my mind. I'm kidding. I suppose the best times of the tour are hard to describe really - because for me it is little things. Small kindnesses from strangers and friends, new friends, seeing inspiring musicians play, watching the whole country slide by from inside the van…. those kinds of things.

I understand you've recently gone through some lineup changes, tell us a little bit about that and what that means for Eight Bells moving forward.

Yes, I am no longer working with Haley. We parted ways at the end of March. We appreciate her contributions to the band's body of work, being the master musician that she is; I know that her solo project will do great things.

I am really stoked to add Dan Barone (played bass on the final SubArachnoid Space record, titled Eight Bells/toured the US extensively) and Melynda Amann who currently plays in Portland bands Jamais Jamais, and Mane of the Cur to sing and play keyboards. We will be playing Landless material for a bit, but plan to start writing new music after the November shows. As always, the band will remain a collaborative effort. I am eager to see what comes out of this particular group - and feel like we have developed a fun working relationship over the last few months. Change is always.

You injured your leg on the tour in support of Voivod, how's that coming along? Are there any plans to hit the road soon with the new lineup soon?

I actually got pretty badly hurt yes, it was in Atlanta. I was essentially tackled and dog piled by three dudes side stage. I was not even in the pit. Turns out I dislocated my kneecap, tore my meniscus, have pretty serious cartilage damage and torn ligaments and bone bruises. I have been doing physical therapy since I got back and got it as good as it could get but still couldn't kneel or squat. You don't realize how often you do these things - looking under the bed, looking in a cabinet, cleaning the tub, turning knobs on pedals…. So because that was not really improving, I had surgery to make some repairs on July 8. So far it seems like it is healing ok, but I have many months of physical therapy to go.