These gents don’t need introductions. Almost 20 years of playing music under this name. On the account: 1 promo / demo, 1 split, 1 single and 6 devilishly strong albums. During recording of In Extremis, the band consisted of Inferno-drums, Bart-guitar, Necrosodom-voc/guitar, Peter-bass. Lots could written about them all or maybe even more, but here and now this unholy space is dedicated to the band Azarath, and Bart agreed to exchange a few words, so I invite you to read the interview with a man whom you will not scare with the crucifix. 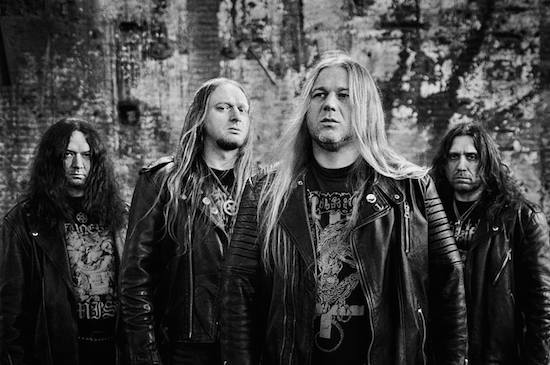 Hi Bart, how is Azarath doing right after the release of such powerful In Extremis and also on the threshold of the twentieth anniversary?

Hi! Very good. There is a very big response to the album. Hope it stays that way.

What is the feedback of the new album after the first auditions? Are you happy with it as well?

Our satisfaction always comes first. We, as creators, must always be 100% confident and satisfied with the music we play. And if someone shares our enthusiasm and has a similar taste, that’s kick-ass. We get a lot of positive reviews, the feedback is really cool.

Six years we had to wait for your 6th album. Tell us in what kind of pains In Extremis was born in and who gets the credit for it kicking butt?

6th album so 6 years :), but seriously, we never rush. We do not have any pressure, a whip over our heads, pressure from the label or otherwise. We work quietly, without stress, and when we are sure of it, we start to work with bookings in studios, etc. The material for the album was mainly composed in 2013-2015; beginning in 2016 we finished a few numbers and started recording in March 2016. The mix of the album, and actually the choice of place and person, we spent a lot of time on - and it was worth it!

You've worked with many producers / sound guys, such as Arek "Malta" Malczewski and the Wiesławski brothers, what's your take on final effect of cooperation with Haldor?

This time around, before the final mix, we did something completely different for the first time. We picked a couple of people who were interested in this and wanted to mix the record, and asked for a mix of one song. Well, we liked Haldor's version the most. It had the greatest potential and energy in it. And we are mega happy with his work. The album sounds alive and powerful!

After the great Blasphemer's Maledictions were you not afraid of experimenting with someone new, wouldn't it be safer to sit with someone known and light up the solid fire again?

Azarath is a band of musically overworked people. You also co-create Armagedon and Damnation. All 3 bands are very significant in the Polish metal world. How do you manage to combine playing, work and private life, it must be a damned hard task?

Damnation is a closed chapter already. A couple of years ago, we tried to resurrect it with Les, Jeff, and Mlody (now Decapitated), we played a couple of rehearsals, but eventually we gave up. With Armagedon we do not play any concerts at the moment and there weren't that many before that anyway, there was quite enough time for Azarath and Armageddon and private life. Besides I like it :) it's my passion.

Referring to my earlier question, what happens in Armagedon and Damnation? Will we be able to enjoy their art yet again?

Damnation - I think definitely not. Armageddon - I would love to, I hope Kris and Slavo will create yet another material! I've loved Armageddon since Dead Condemnation.

I know that, like me, you are a big fan of hard-hitting metal, tell me how do you rate this year's new albums of Immolation, Beheaded or Deivos?

From the ones mentioned I only know Atonement by Immolation in its entirety. Very good, dark and gloomy album. I've only heard one number by Deivos, so I cannot say much about it yet.

Moving on, I have to tell you that for me, you were a band walking the same path as Lost Soul, uncompromising death metal smothered up to the ears in a black metal tar, and I will admit without any torturing that I am a fan of both bands. Tell me what do you think about my comparison?

I really liked Lost Soul till Chaostream, they released 3 cool albums. Their latter materials did not impress me and in my opinion they were too "synthetic". With Lost Soul we are connected only by Piotr Ostrowski, who plays bass for us and Adam Sierzęga, who often accompanies us in exchange of Inferno.

Tell me what are the chances of seeing you playing live? Last time I saw Azarath was in 2011 in Lublin at Bulldozer's side, and I must tell you that I am very much looking forward to another display of your power, maybe with Immolation, what do you think about that?

We would be happy to play with Immolation, you know it! As for plans for concerts in Poland, I can tell you that we plan to have about 8 concerts at the turn of September / October 2017.

Thinking of my Florida buddies here, tell me if there is even a spark of hope to see you on the other side of the ocean? Maybe some festivals?

There is always hope, unfortunately, it is a rather expensive undertaking. If there is an organizer who will cover all the costs - then I don't see why not. We would very much like to play on the other side of the ocean, especially since we get a lot of e-mails, orders or proposals from there.

After a short flirt with Witching Hour, you came back to Agonia Rec. Was it pure economy, or experiences with collaborations weighed in on this choice, and not another publisher? Were there no foreign deals?

We negotiated with several labels, including German and one "bigger" from France, which itself has been trying to "persuade" us for a couple of years. Luckily, based on pragmatism, we also decided to present our material and our vision of releasing an album to our native Agonia Records. And it was by far the best choice. First of all, we knew what to expect with our earlier, trouble-free collaboration with Praise the Beast. Secondly, Agonia, without any whining and moaning, agreed to release the record exactly as we dreamed it would be, when for example, for a French label it would be a mega issue. Thirdly, negotiations with Agonia were really quick, solid and problem-free, which also meant something to us. Seeing now how the album was released and what is going on in the promotional aspect, we can safely say that it was the best choice.

Going back to the music on In Extremis, having Inferno behind the drums during creation of the album you have the comfort that the percussion will be a tip-top, but how is his guitar work?

Just as good. When writing and creating material we both play guitars, create whole skeletons and structures of riffs. At the same time, Inferno already has a lot of drums figured out in his head and then it goes fast :) By playing all the guitar stuff during practices we immediately put together two guitar parts, and often also third or fourth guitars aka background. Also, Inferno playing guitar was last seen at the Witchmaster concerts.

I must say, not to take away from the power of the other musicians, that these evil Necrosodom vocals make all the difference, how do you look at Bruno and Necrosodom's vocals in hindsight?

Each one had a different tone. Bruno is a typical growling, powerful natural voice with diaphragm, more in the style of Immolation. Necrosodom, in turn, operated on a larger scale, wild and furious vocals more akin to Mortuus of Marduk. Both vocals fit perfectly with Azarath.

It was nice to exchange some words, thanks for the interview and hope to see you soon.

Thanks for the interview! See you at the shows.