Masachist jokingly say about themselves that they are five motherfuckers who know what they want to do. Five incredibly charismatic guys whose names are etched into the history of Polish death metal. It is a pity that they could not perform in the original line-up, but certain duties could not be left behind this time. I invite you to a short chat with Trufel and Pig (vel-Sauron), which I managed to carry out after their Brutal East Festival appearance. 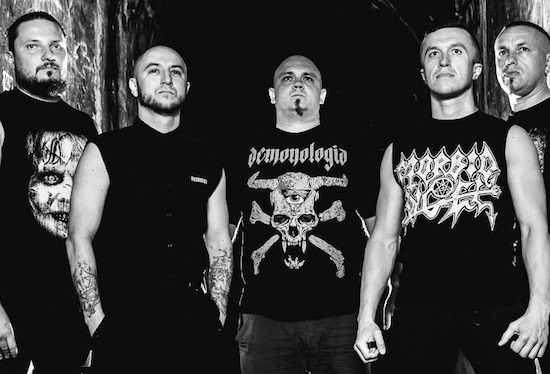 Greetings, Masachist is a pretty serious name in our metal world already, how would you evaluate it, what are your strengths and weaknesses?

Trufel - There are no weaknesses! (Laughs) We have been playing for 12 years, because we like it. This is our passion. In general, we don't care whether we are popular or not. We record something from time to time, usually when we feel that muse is with us. Same goes for concerts, we do not feel any great pressure. Of course, we appreciate that someone wants to invite us, hence, we can thank the BrutalEast organizers right here - Jack and the rest of the team. Last time I played in Fama was probably 15 years ago with Yattering. I have to say that I thought it was a bigger club, but I guess I was smaller back then (Laughs) so; it is great that someone appreciates us, though if they wouldn't, we would still play, because we like it.

What about your lineup? Some quite busy people in there.

Trufel – Well, lineup, as colleague Sauron said, is a bunch of sonsofbitches and that's how it must be. For 12 years now, in total, we can say that it stayed the same. Same one recorded and same one played most concerts, except maybe for Heinrich. The prose of life takes him out.

Sauron - In the beginning there was the premise that we are gonna try to play in the same lineup and we knew that there will be limitations. Each of us has his own activities that we are devoted to. We are not the people who make a living out of this, except Daray maybe, who is known to play in several other bands, so from the beginning everything was clear. We play when we can. There's no pressure, as Trufel said, so if we can meet, and that is not easy, then we play. The lineup on the records is very important, and as you can see, some really cool dudes are helping us out during concerts. We have friends who can make this up, because Masachist, is an animal very rarely manifesting itself.

Oh yes. It's been half a year since the release of The Sect, how's the feedback?

Trufel - Pretty good, although it could be better (laughs).

Sauron - Feedback is what it is, but I have to say that I'm fucking happy with this album, and that did not happen to me before. I often listen to this album, and I did not do so with Decapitated or Masachist previously. When you record the album, you listen to the heck out of it, you tirelessly record, and you just have enough of it at some point, and with this disc it was not a case. You know the response is good, and perhaps if more people have heard of this album, then maybe it would be even better. We work in our niche. Whomever it has to reach, it reaches and we have rather good opinions about it. Nobody dared to say to me, that it is a shitty album (laughs)

Trufel - Oh, really??? No, it can't be, because we may not be recording albums anymore (laughs), we will be recording EP's, but more often. Just 3-4 numbers I think, it will be more advantageous for us and for the fans. There is no need to wait for five years, because it is pointless. You just have to keep grinding and that's it. First strides to the successor, the first riffs are already there, but there is nothing to stress about.

How do you assess your performance on the X edition of BrutalEastFest?

Trufel - The rest of the bands very well, and us??? – Punk-ish! It cannot be hidden that the lineup is different. We did not have the time to really get along and mesh together that well.

Sauron - You know, we are aware it could have been done better because it could, but on the other hand it was a lot of fun. Reception - OK. I am glad. The audience showed up so it was nice to appear.

We are also glad to hear and see you live. Are there any chances that this will change?

Trufel- No! (Laughs) We'll keep playing from time to time. We have our occupations so it will not change much.

Sauron - We will never be a band that plays tours. That was the presumption. We do not strive to play many concerts.

Trufel - We will definitely play something. Maybe not every 2 years, maybe a little more often, but we will not play tours because we do not have time for it. We played more often when we were going to college you know, it was a carefree life, but as soon as the duties began, the prose of life, then there is no time for playing like we used to, but it is still a huge success that we continue to play.

Sauron - This is our choice, you either get your whole ass all in into playing or not. This is a matter of some choices here. That’s how we want it, that’s how we imagined it and that’s how we realize it.

How did your come back under Witching Hour Prod wing happen, after the episode with SelfMadeGod Rec.? How would you rate the work of both publishers?

Trufel - Hocus-pocus (laughs) He was talking, I was talking and didn't notice when paper was signed, (laughs) well, we did not get any great offers. Karol also does a great job. Well, but I think we will keep changing it back and forth (laughs) but seriously, second album was also released by Witching Hour but they had some kind of turbulences going on at the time and we were stressing about putting the music out since all was recorded already and we kept dragging our feet for a long time. We would have to wait for it t be released even more and we didn't want to wait so we came to the agreement with SelfMadeGod back then and with Witching right now. It's good that anybody still wants to put our material out altogether (laughs).

I have a question to you Trufel. Supposedly you recently met with Swierszcz . Was it a normal meeting, or maybe something more than that? I'm thinking about a possibility of reanimating Yattering.

Trufel - No, there is no chance for Yattering, it does not make sense. If Yattering would come back, Zabek would have to come back, but Zabek is going through turmoil in his life at the moment and so far he does not even play on drums at all. It was more of a friendly meeting. I have kept in contact with everyone and frankly all these returns are really worth shit. Either you play uninterrupted, or you break apart and goodbye, not some comebacks. It is not some Brazilian soap opera.

OK, few more words to finish it up.

Trufel - Death metal is fucking governed by its own law, and we are that law! (Laughs) Thanks!