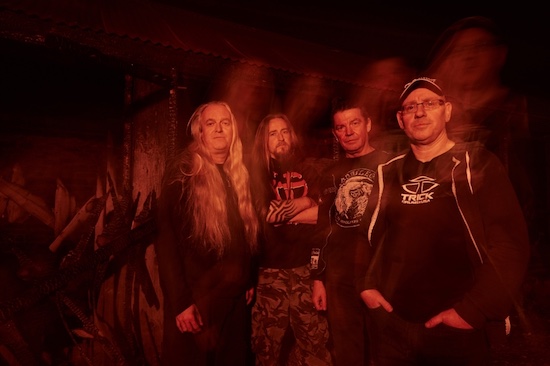 The third album from old school metal veterans MEMORIAM, Requiem For Mankind, was released last Friday. Today, the band presents a very special video for new album track 'The Veteran'. The video was created by Daniel Dodd. Daniel was a soldier in the British Army, who came back from Iraq as a veteran in 2007. He is now a photographer, who uses his work to address the traumas he faced during, and since his deployment.

Daniel Dodd states "I joined the British Army as an Infantryman in January 2005 and served a 7 month tour of Iraq in 2006, returning home in May 2007. I was medically discharged with PTSD in late 2011 just 6 months prior to another deployment, this time to Afghanistan. Within twelve months of being back in the UK after my operational tour I was noticing considerable amounts of differences in my behaviour, from the amount of alcohol I would consume on a weekly basis to escape the replay of disturbing thoughts I would have, which would lead me to losing sleep and also resulting in an addiction to sleeping tablets, falling into severe depression. I became very aggressive and I was arrested multiple times for fighting both sober and under the influence, I had a thrist for confrontation at this point and I felt uncontrollable.
I suffered with survivors guilt after losing close friends to the enemy during my deployment, but as a result of my own physical injuries which I sustained whilst in a firefight, I believed I should have also been killed and felt that I was better off dead than I was alive, as I still could not escape the nightmares, the flashbacks, lack of sleep etc. So after a few years of being in and out of therapy and being on medication, I found that my escape was no longer alcohol or violence but walking, going on adventures alone with my camera and capturing memories that were positive and working on those rather than the ones I was battling against. In regards to making the self portraits that visually represent Psychosis and other mental health issues, I was a little reluctant to put myself back into that particular frame of mind for the sake of my work - especially as I had only encountered my first and hopefully my last episode of Psychosis last Christmas. It was still very raw with me but I took that opportunity to create the most honest photographs that I possibly could with how I was feeling at that time, and I felt that it was important for me to document those times and how I was seeing myself - as I document most things in my life now and use them to build a stronger and better relationship with not only myself, but everybody around me.
I think it is great that Memoriam are using the subject of veterans in their music and highlighting the issues that are very relevant in not only veterans who have served in wars post 2003, but prior to that. Also I couldn't imagine anybody who has been in my position, similar or worse, not relating to even one of the matters that Memoriam have expressed in the song The Veteran. The music may not be to everybody's taste but neither is War, and unfortunately there is truth to be told and found in both of those. I really enjoyed creating the video for The Veteran though and I found it to be a way of therapy for myself thankfully and I surprised myself, it's the first time I have used my work in this way, so I am thankful for the opportunity given to me by a dear friend of mine Timm Sonnenschien. I would be interested in creating some more work of a similar nature in the future."