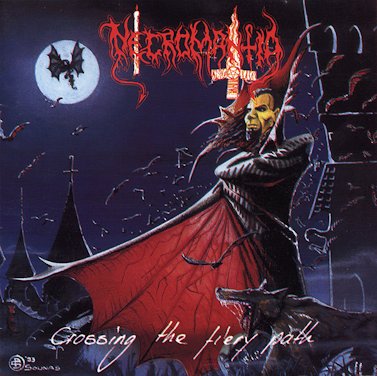 It may seem strange to have the first Greek band discussed in a BMR season be one that ISN'T Rotting Christ (don't worry. We'll get to them soon enough). But the mysterious entity known as Necromantia (a Latin phrase meaning something in the neighborhood of "Divination of the Dead") is another founding father of the scene, and has been around just as long (over 30 years). 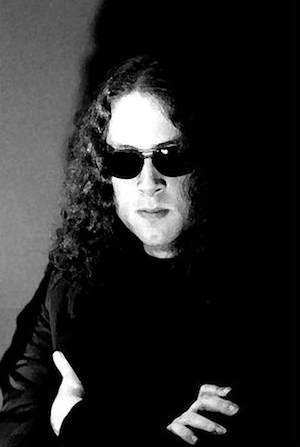 The world of black metal lost one of it's most unique musicians when founding member/bassist/keyboardist Baron Blood passed away this past November as the result of a heart attack. He is one of the genre's unsung heroes. In addition to helping sculpt Necromantia's eclectic sound, his bass playing is as unprecedented as it is largely unappreciated. It's almost like its own symphony. In addition to the many colorful bass lines, it also fills in the space normally reserved for the rhythm guitar.

So in tribute to Baron Blood, we are revisiting two of their classics from the 1990s, as well as their last studio album.

We start by journeying back to 1993 for their debut full-length, titled Crossing the Fiery Path. In addition to being very recognizable in style to the other Greek black metal releases from the era (you can totally hear the fact that these guys hung out with Rotting Christ and Varathron), this album showed Necromantia to be unique in many ways. Where a lot of their colleagues rely on a more subtle ambiance and vague-yet-terrifying darkness with which to unleash their sorcery... Necromantia prefers to play the blasphemy and horror-show worship right out front. In fact, with their use of samples, narration, sometimes stately keyboards and unsubtle sound effects... there are several moments that are downright King Diamond-esque in nature (complete with some acquired-taste screaming). An excellent album, although the band would find its true calling and unbelievable firepower on their following release... 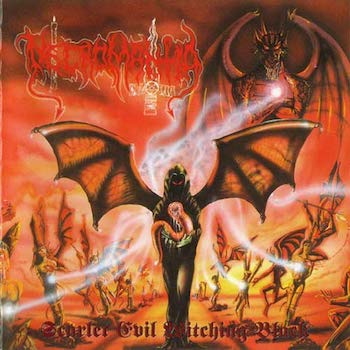 It is scientifically impossible to listen to Necromantia's 1995 masterwork, Scarlet Evil Witching Black, WITHOUT getting your ass kicked to Hell and back. Holy SHIT, the band really found their true guts on this one. It's almost as if they took the fun experimentation of Crossing the Fiery Path, and they were all, "Alright. We're ditching the stuff that didn't work, and fucking committing to and charging straight through with the stuff that did. Let's add some blissful brutality, too. OH! AND enough traditional Greek spice and crunching catchiness to give Rotting Christ a run for their money." Seriously, the confidence and cohesiveness on display here is positively overwhelming. If you are looking for the quintessential album from these elder Greek gods... this is it.

NOTE: Not only does one of the songs start out with a sample of Wagner's Ride of the Valkyries (not a huge surprise there. That piece is metal as shit)... but the band made the curious choice of introducing the whole album with a quiet, sad instrumental version of the refrain from Auld Lang Syne... which reaffirms the fact that Necromantia still has a very big toe stuck in eclecticism. :-) 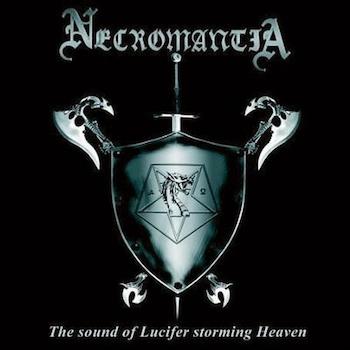 Necromantia does not release material very often, but when they do, it certainly packs a punch. The Sound of Lucifer Storming Heaven (2007) came out 5 years after their previous full-length, and they have not put out another one since. It shows them continuing to hone their mix of black metal and horror-show theatrics. It's a really neat amalgamation of their strengths. On one hand, you've got the choral layering, and the occasional soaring, bordering-on-melodramatic, classical type melodies played on keyboards. On the other hand, you have the delightfully abrasive voice of bassist/vocalist The Magus, which I swear has only gotten more agonized as the years have gone by.

NOTE: As an excellent example of the ongoing collaborative nature of the Greek scene, the drums on this album were performed by Fotis Bernard (of Septic Flesh).

Praise be to the Hellenic Black Cult!