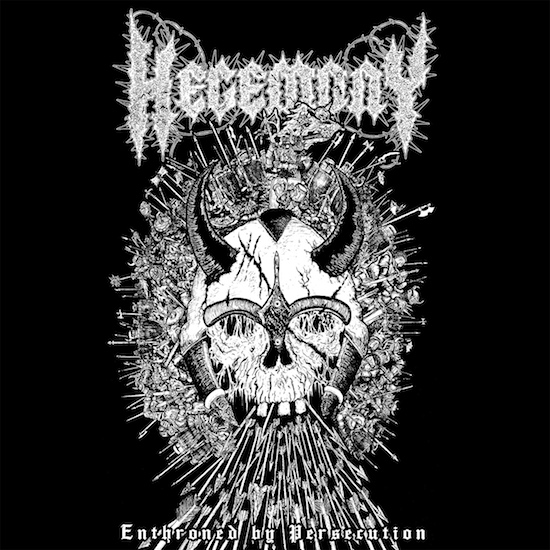 Roughly 33 minutes of pounding, intrusive and dominating black/death metal is coming your way on April 24th, 2020, but today we're proud to present the full album stream of "Enthroned by Persecution", from bestial metal horde HEGEMONY, courtesy of Hells Headbangers Records.

Here's something you might want to keep up with if you have an ounce of appreciation for death/war metal; HEGEMONY, Alabama's latest answer to the world of war hymns. The band's debut full-length album, "Enthroned by Persecution" is a rowdy n' remorseless display made to appear of a sound and composed mind. Guitarist Barbaric Progenitor took some time off from crushing bones to answer a few questions about the band and their music. 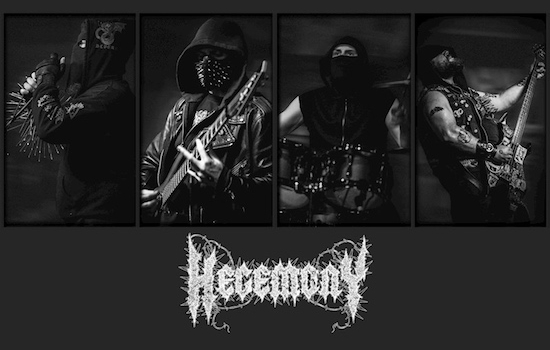 Coming from Birmingham, Alabama, what are some of the bands you cite as contributors to Hegemony's sound?

Hegemony's musical influences are drawn from bands such as Abhorer, Black Witchery, and early Kreator. But our aim is to create jarring and suffocating metal, not directly derived from any obvious source, unlike many black/death bands content with imitation.

How would you describe Hegemony's style of metal?

We think of our music as Death/War metal.

Hegemony as a band-name seems fitting for war metal, is it related to some philosophy of yours?

It was a suitable banner for our attack. Our songs are inspired by war, conquest, barbarity and hedonism. The name was a natural fit for these themes.

The cover artwork for "Enthroned by Persecution" caught my eye, who painted it? Also, what does the depiction signify?

The cover was commissioned from Caleb Dickenson (Cosmic Void Dark Art). It depicts unending conflict and death; all manner of weapons and armaments form an amalgamation to represent conflict and dominance.

The album's quality has a cloudy edge that works for both the death and black metal elements incorporated. Who handled the mixing, mastering, recording and where was it done?

Our album was recorded, mixed, and mastered by A. Parra of Second Sight Sound. Tracks were recording in late 2017/early 2018. Mixing and mastering were finished later that year.

Was the music on "Enthroned by Persecution" challenging to record? And how so?

Yes, the music is demanding to play. With the amount of repetition that goes into recording, the process can be tedious. Luckily we were well-rehearsed before ever entering the studio.