What would be a good heavy metal album without a cover? I guess only half it's worth (okay, there might be some exceptions for this, too). I think it is quite interesting to keep an eye on the people behind this genre album covers too and so I asked the British artist Dan Goldsworthy (responsible for cover paintings for Accept, Xentrix, Inhuman Condition etc.) if he was interested in an interview for MetalBite. He responded very quickly and so I sent him a lot of questions about his work, influences and many more. Thanks again for answering so fast Dan! Enjoy reading! 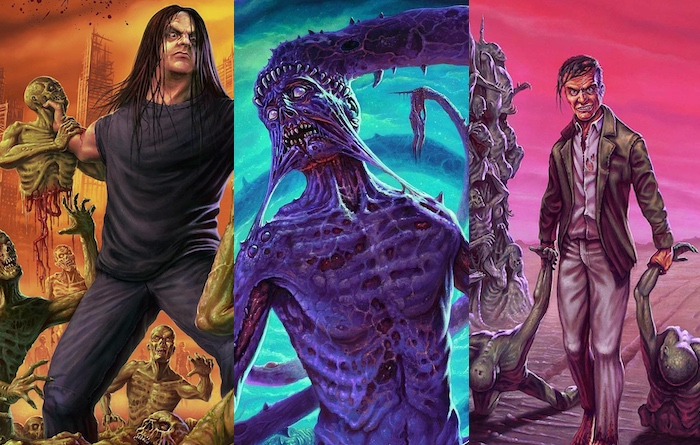 Hello Dan, how are you?

Hi there! I'm good thanks. Super busy with art and looking after my two young children mostly. Would ideally have another 12 hours in the day to get stuff done, but that aside I can't complain.

How did you start your career and how did you end up designing covers for metal bands?

I have always been into art, so when I had my own bands from around 1999 onwards I naturally did the artwork. That then spread into the local scene and I did the odd bit for bands I knew. As far as for more established bands, it stems from my time on the Andy Sneap production forum in the mid-late 2000s. I used to do some silly photoshop work on there which caught a few people's eye, including Andy himself. He then asked me to do all the art for Hell, his pre-judas priest band. I was a big fan of his work so it was quite surreal starting off my career by working with and becoming friends with one of my heroes. That led to opportunities with other bands, and 12 years later here we are.

Where do you get the ideas for the covers? Do the bands give you certain guidelines or do you bring yourself in?

Normally a band will have a concept, but it can vary from complete freedom to an exact detailed brief of every element. I generally prefer the band having at least a starting point as it will often be something I wouldn't think of myself and takes the mental stress out of having to come up with a concept! Although I'm totally fine with 'just do whatever you want' as well.

Are you currently painting a new work and if so, for whom? The last one I know was the cover for the latest Inhuman Condition album.

I think I have about ten album covers in the works at the moment. I've just finished an EP cover for Tim 'Ripper' Owens and a single cover for Aborted. These were great to be a part of, and Aborted are one of my favorite metal bands from the last 5 or 6 years. I also have something else that's extremely exciting lined up in the next couple of months for a band I love, but I won't say too much more about that just now in case something happens and it doesn't come through!

Which band was the most fun to work with?

Without wanting to sit on the fence too much, almost all the commissions I get are supremely enjoyable. People generally ask me to paint the sort of things that I want to do. If I really had to pick just one, the work I've recently done for Charlie Griffiths' (guitarist of the prog metal band Haken) solo album 'Tiktaalika'. That was a real joy to be a part of. The videos especially were an insane amount of work, but a real good laugh to make. Charlie and I have a huge overlap in both our musical tastes and sense of humor, so it was a very easy ride. The album is also absolutely phenomenal as well and I expect it to top many people's prog metal album of the year list.

Do you listen to heavy metal yourself? What styles and bands do you like the most?

Yeah I'm a huge metal fan and have been buying metal albums since I was a kid in the early 90s. My dad was a heavy rock fan so I've always been around it. Honestly I love bands in almost every subgenre of rock and listen to everything from Winger to Pig Destroyer via Symphony X. I'd say I listen to prog, thrash, death metal (and 1980s pop!) the most. I grew up on a fair old diet of the thrash big 4 and all the Floridian death metal bands. Some of my favorite thrash and death albums are: "...And Justice For All", "Rust In Peace", "Among The Living", "Arise", "Symbolic", "World Demise", "Wolverine Blues" and "Heartwork". All fairly obvious ones I guess! I also grew up with a lot of the albums or bands that were big in the early-mid 90s; Alice In Chains, White Zombie, Pantera, Biohazard, Machine Head, Fear Factory etc, and been a huge Devin Townsend/SYL fan since "Ocean Machine" and "City" came out in '97. As far as my favorite bands these days it would be Haken and Propagandhi. On the more extreme ends of the spectrum I listen to a lot of Aborted and Misery Index, and Toto and Journey.

Coming back to art, which artists or paintings inspired you to become a painter?

It was always metal album covers that made me want to get into it. I remember seeing Iron Maiden's "A Piece Of Mind" when I was 8 years old and that started my love of metal album covers. There's no better place to start than Derek Riggs era Maiden as far as cool covers go really. Then shortly after I discovered Ed Repka's work for Megadeth and Michael Whelan's covers for Obituary and Sepultura. Outside the world of music I liked MC Escher, Dali and HR Giger's growing up, but I was never heavily into 'proper art' as such. I've always liked things that are a little dark and surreal and that's what you get with a lot of cool metal covers. In more recent years I've grown to love the work of the fantasy masters Frank Frazetta, Ken Kelly, Boris Vallejo & Julie Bell, as well as the dark work of the polish surrealists Zawadzki, Beksinski & Lewandowski. I'm also a fan of retro sci-fi/fantasy art by the likes of Bruce Pennington and Roger Dean, which also brings me back to album covers again given Dean is well known for his brilliant Yes album covers, and Pennington had his work used on the last Blood Incantation album. That cover is superb.

Are there any styles of art that you can't relate to? I don't particularly like Joseph Beuys or pop art, for example.

Yeah pop art never did it for me either, nor does a lot of modern art. But I view it like music. It's so subjective, so if I don't like something I just don't pay much attention to it. If other people enjoy it then good for them - it would be boring if everyone liked the same thing. Variety is the spice of life etc. I don't generally like art that 'doesn't look very good' though. If you can't tell if it was done by a 3 year old, or if it looks like that by complete accident then it doesn't do much for me. Jackon Pollock paintings for example. My feelings towards this are magnified when pretentious people try to justify its intent or brilliance, when in reality the artist probably just chucked some paint at a canvas and went 'that looks cool'. But again, if other people genuinely like it then I certainly won't tell them they are wrong.

Which artist, who is also responsible for album covers, do you like or which cover of his?

My favorite album art from over the years has generally come from Ed Repka, Michael Whelan, Dan Seagrave, Wes Benscoter, Andreas Marschall and Derek Riggs. Those are the ones I grew up on. They've all done so many I absolutely love, but if I had to pick a handful of ones that really inspired or influenced me, I'd say -

Marschall - Obituary "The End Complete", Blind Guardian "Imaginations From The Other Side"

Travis Smith is also great at what he does and in my youth I used to really be into Pushead's work for Metallica.

What is the best metal cover of all time in your opinion? And maybe also the worst?

Picking a 'best' of all time is tough, but Sepultura's "Arise" would top my list. There are loads of laughably bad ones that are sometimes so bad they are good, or have a certain charm to them. All the coloured pencil looking ones such as the pre-"Cowboys From Hell" Pantera albums, that famous Battle Axe one, "Power And Pain" by Whiplash spring to mind, but not in a way I 'hate'. As far as genuinely terrible, the original "Shotgun Justice" by Razor could have been a great cover if it wasn't executed so badly. Iron Maiden's "Dance Of Death" would be right up there too as they used an unfinished demo version. I feel really sorry for the artist David Patchett as his work for Cathedral is incredible! I actually bought "Supernatural Birth Machine" back in 1996 largely because of its cover. But the winner has to be "Topple The Giants" by Adema. If you've never seen it, look it up. I have no idea how that passed multiple green lights, unless it was a joke. Bad art is to some degree excusable, but bad photoshop is criminal.

Finally, two "what if" questions...for one, which band would you most like to draw a cover for one day?

It's got to be either Megadeth or Maiden. I used to draw Eddie and Vic Rattlehead so much as a kid, but also I think I could do a decent job of bringing back the vibe of the old school covers. I can't compete with peak 80s Repka and Riggs, but as a huge fans of the classic periods of those bands both musically and artistically I'd just do what I'd want to see as a fan, and what I think many other fans would want to see too.

Secondly, if you could choose any already released album (any album) that needs a cover, which one would it be?

Tough one... I guess I would say any of the more recent Megadeth or Maiden albums with not-so-great or CGI covers. Something like "Endgame" would have been awesome to do, as that album is great and I think a classic cover would have elevated that album to the tier it deserves to be on the strength of the music. Even "Dystopia" would have been cool.

Thank you very much for the interview!!!

Thanks very much for the questions!