I went to this show (Septicflesh, Krisiun, Diabolical and Science of Disorder, at Proxima club, Warsaw, 7th April) to watch mainly Diabolical and Septicflesh but I was also interested very much in Krisiun. I didn't have much time to look deep into the Science of Disorder biography and discography before that. I knew it wasn't many albums released and that the initial feeling was that this music was something different. I arrived at the venue quite early, so still had some time to walk around and find a good spot to observe the entrance and musicians arriving. And as soon as I found a good place I noticed few guys looking familiar, sitting on benches outside Proxima. It was the whole line-up of Science of Disorder, a band playing a mixture of death metal, punk and some psychedelic type of metal, a bit difficult for me to describe. Little did I know that one of the guys being the quietest and calm was Jérôme, vocalist who really is a fantastic frontman and provides good performance both as a vocalist and main creator of an atmosphere on stage. And it is very uneasy atmosphere, filled with anger, frustration and all other difficult emotions that appear when you feel hopeless. So, thankfully all guys agreed to give few minutes of their time to answer my questions. It was mostly Stéphane talking, but from time to time the guys were exchanging some views before he replied to my question. And after the show I had a really nice chat with Lord Pelthor about Solar guitars endorsing both Lord and Stéphane, responsible for that unique, dry and crunchy sound. Don't forget to check out my review of "Private Hell" and give a listen to at least "Light Bearer", my favourite track on this album so far. Unless you want to get right to the interview, read below then. 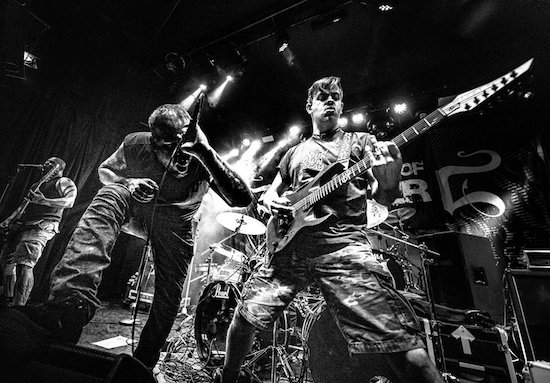 First of all, I've seen you haven't got many albums out yet, I would like to ask how did you manage to get that tour and how this idea came about?

Stéphane Grand: The first idea was to promote the band, to have this opportunity to tour with famous bands like Septicflesh and Krisiun. To also have an opportunity to play in this kind of venue for that many people, this was the first idea. We just have our Swiss promotor, who sent us a mail asking if we're interested in joining the tour and we said "Yeah!".

So, how many shows have you played so far with the other guys?

And what are the impressions?

I can say that from the initial listening that your style is closer to death metal, isn't it?

I'm asking because it’s kind of mixture when it comes to this line up as well: Septicflesh, Diabolical, Krisiun and yourselves, each attract a different crowd.

Jérôme Thomas: I think where we come from mostly is death metal, but we have other influences and now we represent a bit of a hybrid of many different scenes.

And how does the composing side look like for you? Some bands like to write their new ideas while they're on tour. Do you do that as well?

SG: No, I usually compose at home, in front of my computer. First writing down some ideas, recording a guitar part and after that I write the drums, doing the whole song and after that I send it to all of the other guys and they tell me whether everything is OK or if we have to change something. The main thing is that Jérôme needs to get inspired by the music. It's really important to get inspired by the music to do some good voice parts and we take our time before we achieve a moment where we have the right song.

So, obviously the music comes first and then lyrics come last.

SG: Yes, this is the way we compose.

JT: I can still change that, if I want (laughs).

Which studio did you record your album at?

SG: Downtone studio, it's a studio of a very good friend of us, Drop from Samael. He's working there, I used to play with him in a band called Sybreed. I think he is one of the few people who understand what we want in terms of songs. And this is the reason why we decided to work with him.

Does it mean he still has something to say when it comes to final sound of the album?

JT: He always has some good advice, regarding the sound.

What are your plans after this tour?

SG: Focus on a composition of the next album.

Does that mean that you already have some material ready for it?

Oh, so what is the expected release date for it?

JT: We already have some songs ready to be recorded this summer and hopefully the rest of the album by the end of the year.

Do you usually try to play the new tracks live before you release the album?

SG: No, we keep them in secret.

OK, so what is the setlist for tonight's show? Do you play one full album only or do you choose different tracks from both?

JT: No, it's one album only, but not in full as there's not enough time to play all tracks. Only selected tracks from the last album, Private Hell.

By the way, how does the metal scene look like in Switzerland right now? Do you have strong metal scene where you come from?

SG: In the German part.

JT: Yes, it's the German part, not many in the French part.

OK, so what are your preparations for tonight's show? Do you have any special props for your stage?

SG: No, we don't. This is our last show on this tour, we're going to give everything as it's the last set.

And after this show you're going back home?

Well, it was fantastic speaking to you guys, hope to hear some new music from you soon and see you on the show!

SG: Thank you very much.