The crazy Finns of Impaled Nazarene are back on the metal stage with an aggressive and uncompromising album called "Eight Headed Serpent" (review here). Personally, I think that the band is a bit back to the roots, even if some others may not be so inclined to the album… but tastes are different as we all know. Long story short, I used the favor of the hour to ask chief goat Mika Luttinen a few questions, enjoy the interview!!! 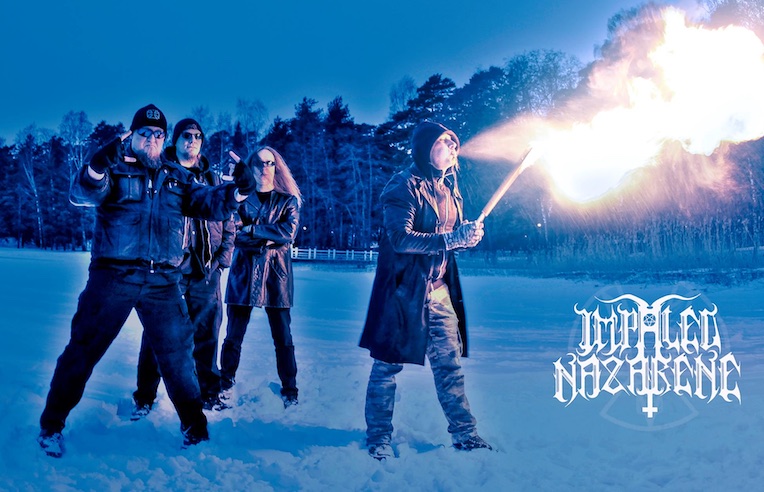 Hello Mika, how are you? Congratulations belatedly to your 50th, I hope you could celebrate the day despite Corona reasonably and appropriately!!!

Doing fine, did just some gardening and drinking New York sour. My birthday was such an anti-climax because of this covid-19 thing. I had planned great things, but all went down the toilet. But what can you do?

Not only did you turn half a century old, but the band also celebrates its thirtieth anniversary this year (at least if you go by the release date of the first demo). Just in time you have a new album called "Eight Headed Serpent" on the way. Are there any plans to celebrate the jubilee?

Originally there were plans for November 2020 (we formed in November 1990) but had to skip all of them. Now they all seem irrelevant as we are past that date. It makes no sense to me to do 30-year anniversary things when we are already past that.

The last album "Vigorous And Liberating Death" is already seven years old. Why did it take so long to release a new album? That's almost Metallica style....

It was not what we planned. We did shows after Vigorous... came out and every year there was more shows. When we have shows coming up, we do not rehearse any new songs. We plan and rehearse live sets and go home. We are not one of those "let's jam at the rehearsal place" bands. We write new songs at home, individually. Once the song is ready, we bring it to the rehearsals. Then we collectively decide if we keep the song, throw it to trash or change something. For this album we kept all songs intact. Everybody was happy what one brought to the rehearsals.

Lyrically, it goes in the same direction as on the previous albums. Apocalypse, Satan, Shit Mankind...but I haven't found a song that is really provocative like a few years ago, say "You don't rock hard" or "Zum Kotzen". Do you want to avoid the stress that used to happen at concerts?

You get my lyrics wrong if you think I want to cause mischief on purpose. I write what I write, things that I feel strongly about at that moment. It would be too easy to piss off people. That is not my point, nor it is the point of this band. Every album is the mirror of that time period. Also, every interview keeps on asking this "banned at concerts" thing. Last time was 2017 (and it was one miserable fest in Belgium that is 90% punk/hc fest. If we had known what kind of festival it is, we would have declined the offer right away. It was a good lesson though, now we check every offer beforehand so this cannot happen again) and before that 2006. It is like that "war" between us vs Norway thing. Still, we get questions about that even if the whole thing dried out years ago.

Musically it goes pretty far back to the roots. I think you can partly recognize old song structures like on the first three albums, plus a fat pinch of Motörhead. Is this a kind of homage to yourselves in the anniversary year?

Not really. We never plan what kind of album we are going to make. We just happen to know how we must sound, and we write that way. I think it is the production of the album that gives this old school vibe to so many people. Personally, I don't see/hear anything that we would have done so differently. But anyway, we are 666% happy with the album. And that is what matters.

How did you get the idea to use this completely stupid exorcism scene by Ed Citronelli as an intro? I can't believe that there are people who believe such shit.

I had no idea who this was. I got an audio (no video) from a friend of mine a couple of years ago and it was clear to me this will be the intro of our new album. At the same time, I was writing music for 'Goat Of Mendes' song and it was clear that it will be the album opener and that we will release it as a single without the intro. First songs for this album were written in 2017 or 2018 if I remember right. It was a long process.

What is the "Eight Headed Serpent"? Does it have something to do with the octagon you sang about, which is supposed to represent evil, or does the idea come from the Japanese mythology, where there is an eight-headed dragon?

Yamata No Orochi, Japanese mythology. However, it has been put thru Impaled Nazarene lyric filter so there is pretty much zero left from the original mythology. For a long time, I had "The Octagon Order" as a working title for this album so yes, the number eight is present here as well. It all connects together.

With 'Foucault Pendulum' you have a song that deals with conspiracy theories. You've done that many times in the past, for example, I remember when you fantasized about "Red Mercury" in the early 90s. What fascinates you about that?

Excuse me?? What fucking "Red Mercury"?? At least I don't remember anything about this. I don't know if people understand the message of 'Foucault Pendulum'. It is not any kind of pro-conspiracy song, totally opposite. It is laughing at them, to those idiots who believe that planet Earth is flat or believe in angel/unicorn therapy. I wanted to do extremely simplified lyrics for that song, less singing. After 12 songs of brutal violence, the final song is the doomsday, the end. Fading away. Nowadays conspiracy theories are so retarded, it is unbelievable. I don't mean that I don't believe in any of them, for sure there are some theories that are right (government holding information) but most of them are just plain stupid. I believe in science and scientific facts. You want to believe that all world leaders had a secret gathering and agreed to release covid-19 to everywhere, go ahead. That is your right.

What are the strengths of your new album compared to the last albums?

Looking back on your career, what are you most proud of and what would you perhaps not do again?

Fact is that it is useless to dwell on "I should have never done this or that" type of wondering. Fucking suck it in and admit you fucked up. Move on. I am extremely proud of the fact that we are still here, kicking ass. We have not followed trends, we have not wimped out, we have not changed our logo. We have not given in. We are Impaled Nazarene and there is no band like us. Like it or not, we are here.

In the beginning, if I remember correctly, you didn't really have a good relationship with BM bands from Norway and co, just thinking about 'I Am The Killer Of Trolls', haha. In the meantime, the whole thing should have relaxed quite a bit, right?

I should have known. 'I Am The Killer Of Trolls' has not really have any connection to Norway, there was just all these Troll this, Troll that bands popping out everywhere so that inspired the lyrics. Also, there is a little twist. I wrote both music and lyrics. I read in UK Metal Hammer Latex Cult review where it said we are "borrowing" Metallica's 'The Four Horsemen' in '1999: Karmageddon Warriors' song. So, I said to myself: I will rip-off consciously Metallica's 'Motorbreath', just play it slightly different. Listen to the chorus of 'I Am The Killer Of Trolls'…and unsurprisingly nobody noticed shit. This is the only time I have blatantly ripped-off any other band riffs.

A lot of BM bands that release albums nowadays include strange things in their songs. I don't really like all this ambient, shoegaze, drone, sludge and so on nonsense. What's your take on it?

I don't listen to any of this so I cannot comment. I am an old school metalhead.

Which recent albums can you recommend and what are your five all-time faves?

Latest Necrophobic, The Crown and Cannibal Corpse come to mind. Listing only five is a major pain the ass but:
Slayer - "Reign In Blood"
Rigor Mortis - "Rigor Mortis"
Sarcofago- "I.N.R.I."
Napalm Death- "From Enslavement To Obliteration"
Venom- "Welcome To Hell"
I could list 100 more but you asked for only 5 records…

Last but not least, the last words belong to you!!!

Thanks for the interview. Prost and be free!