The Swedish one-man project Kvaen by Jacob Björnfot (ex-The Duskfall) released one of my favorite albums, "The Funeral Pyre", in 2020. Harsh yet melodic black metal combined with a lot of traditional stuff makes an outstanding album that still find its way quite often into my stereo. I was pretty excited when I heard that Jacob is planning another album release for 2022 and the first single ('The Great Below') in December. I had the opportunity the hear some snippets of the album before I did the interview with him via Skype and have to say that I am looking very much forward to the release of the full-length which will also be titled "The Great Below". Concerning the interview, I was pretty surprised about the honest answers I got, and I have to state that it was a very nice chat. Thanks for taking the time, Jacob! 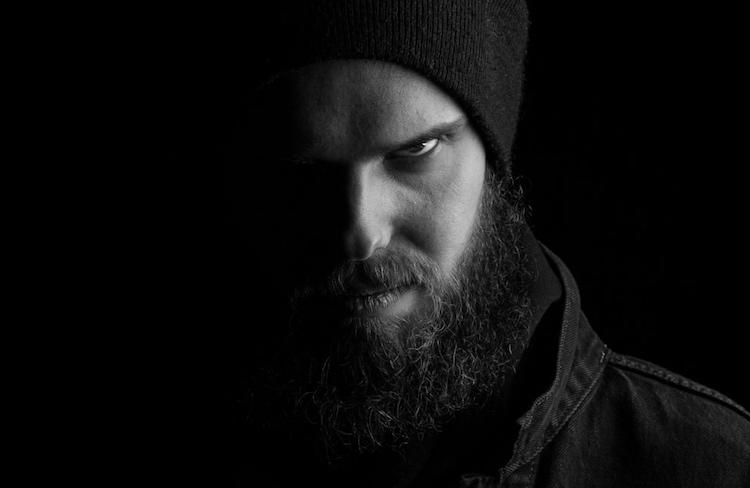 Hi Jacob, how are you doing? First of all, what does "Kvaen" mean?

Last year you released your debut "The Funeral Pyre" and one of my personal highlights that year. How were the reactions towards this album?

Well, it was very weird because I didn't expect that it would be so hyped. It got really hyped up and draw attention from all over the world and the first vinyl pressing, which was a copy of 500, was sold out within a month. The CDs sold out quickly as well, these were 2000 copies, and this took maybe half a year. Then we did another pressing and this was also sold out within one or two months. So, there is obviously some kind of hype and I'm very grateful for that- that the people take the time to listen to my music and that they really feel something when they listen to it. It was kind of funny – a couple of months ago there was this inbox message on Instagram from a guy who suffers from serious bipolar disorder, and he told me that when he listens to Kvaen, it actually makes his life work. That is really scary but cool at the same time because with every album and with every song you release, you give a little bit of yourself to everyone in the world. That is always scary for me because integrity is something that is high in my priority list and it's hard to release something, to give it to everyone for access. But at the same time, it's an enormous relief because there's so much in here (points on his head; M.) that needs to get out. The only way for me to get it out is through words and music.

How would you describe your style of music?

I don't know. I don't like to put terms on my music, but it doesn't matter if people call it melodic black speed metal or some people say pagan Viking black metal and some people just say it's the third wave of black metal. For it's just metal or, if I had to put a term, I would call it melodic speed black metal with hints of pagan metal, but I hate to label my music.

What are your major influences for Kvaen? I guess that Dissection is a very big one…

Oh, that's hard for me to say because I listen to so much music. All the 70s rock bands from Toto to Led Zeppelin, Pink Floyd is also a huge inspiration, all the way to the AOR style and the death and black metal from the Swedish scene and of course Dissection is one of my favorite bands. I like Necrophobic also but there are many great bands I like. I just don't like talking about bands but rather I like to say what genres I like to pick my inspiration from. That goes all the way from jazz to AOR, spaghetti western and metal. The spectrum is very wide.

"The Funeral Pyre" was somewhat an album where the main topic was fire, at least I felt this way. Can you tell a little bit more about the lyrics?

The lyrics from this album are actually about three topics: blood, fire and death. I use a lot of metaphors like Satan and stuff like that, but the truth is that I don't really believe in that. I use these metaphors because he is the enemy of the world or the hater of mankind. So, it's not really about to serve Satan – okay in a certain way it is but more about how destroy this world every day that we actually once worshipped. That we are the last generation, and we serve Satan through destroying the world and that’s what he wants – to kill everyone. I use a lot of this stuff in the lyrics, but all is more or less based upon mythology where I live and how much I despise all forms of humanity because it just pisses me off every day. I just have to turn on the news and it ruins your fucking day (laughs). I stopped watching the news because it just pisses me off. It takes too much energy and I've learned to channel the energy and to write really aggressive music.

Yes, I have also the feeling that there is almost only bad news in the news these days and that it's still becoming worse.

We have a lot of these alternative medias in Sweden, which is really shitty because all of them are very conservative and right-winged idiots trying to make up lies or it's the extreme left and they're just fighting each other. It's total chaos all the time and it just sucks.

You already recorded a new album that will be released in March 2022. As far as I could hear listen to some snippets, it will be as melodic as the last album, though I think that there are some more epic Bathory and a little bit more black metal influence, too. Do you have a title for the album yet?

All the details will be out in December, the artwork and the title of the album including track list. (Here you can find the Bandcamp link with all the information about the album: https://kvaen.bandcamp.com/album/the-great-below ;M.).

So can you tell a little bit more about the style that we will find on the album? Is it just like on "The Funeral Pyre" or is it going to be more epic or whatever?

I think the word epic is a very good way of putting it. The thing with The Funeral Pyre was that all songs were written in different periods of my life. I was in a different state when I wrote the first song 'Yee Naaldlooshii' and when I wrote the last song, I was in a different place in my life. When I look back to it, it feels like a mishmash and somehow it works. Normally this doesn't work because when you're in different state of minds and different parts in your life and you try to listen back to the stuff, and you try to compensate what you've written before if often turns into shit. But somehow, I managed to do that but with this album I began to work right after The Funeral Pyre because I had so many ideas flowing and I started working on the next album just for fun. My goal was never actually to do a second album but to quit the band and something else because Kvaen was just another output for me to describe myself in my way and then do something else, maybe write a country album, I don't know. But I felt that Kvaen had so much more to give and so I decided to try a second album. I did a really good decision to not let this band go because this album is an absolute killer and I think a lot of people who liked the first album will this one, too. People who like Kvaen are not narrow-minded people who also listen to a lot of music because otherwise it is hard to grasp Kvaen ;because there are many different influences in it.

Will there also be a central topic on it?

Yes, the topic is suicide.

I'm feeling very much better now, so it's okay. It's something I can talk openly about it. I was in a very bad state when I wrote the album. I lost track in my life and everything surrounding me but now when I listen to the album, I realize why I lost track. I was not in absence or anything, but everything was so black and dark. And now I got the point of it and actually figure thing out it just makes perfect sense. That's why the album will have a super dark tone and there is nothing positive about this album.

So, the lyrics are very personal and you somehow used the songwriting process as a therapy maybe?

Well, therapy is a very complicated word. But you can use it because it taught me to get rid of some demons, not all of them but a lot. I think music-wise some demons, but I think I got rid of the final details when I did the vocals. I don't know what happened but when I finished singing the song 'In Silence', which is probably the darkest song I've ever written in my life, everything just eased. I became numb for a moment and then I started feeling great. So…therapy, yeah sure. In some sense.

Yes, Sebastian will appear on one of the songs, but I also have Mike Wead from King Diamond / Mercyful Fate, Mathias Lillmånns, the vocalist from Finntroll, Angus Norder, the singer from Witchery, I have a guy named Nepenthe Fridell who sings some spooky, ghostly stuff and one of my biggest idols and one of my biggest inspirations when it comes to guitar play, Jeff Loomis. It's very cool to have him on board and I feel very privileged and honored for that.

What are your expectations for the upcoming album and the next year?

I have zero expectations because I think it's better to go out with zero expectations than with high expectations because then you won't be disappointed. I am so proud of this album, and I would lie if I said that I don't care what people think about it because I will. But I also know that I think that this album will touch a lot of people harder than the previous album did. But I think that the responses will be pretty good. We will see, and we have live shows now where I have Frederik (Andersson; M.) who played for almost 20 years of his life in Amon Amarth the drums for the upcoming shows and I also have some friends who gonna help me out whenever they can. I am a good friend with Johan (Norman; M.) who played with Dissection and I recently spoke with him and asked if he could play the live guitar, so we'll see what the future will bring. I really take day by day and step by step because in these times you never know what's gonna happen.

So, you mentioned the live shows. Are the just planned for the Swedish people right now or do you have some plans to come to Europe, too?

It's only in Sweden now – I have been talking to some people who helped me out to get tours arranged in Central Europe. That is where I want to tour because the Scandinavian territory is very limited. The same bars, the same clubs and the same festivals and in Central Europe the options are much better.

First of all, thank you for the interview and thanks for everyone who will be reading.