Serbia's metal scene might not be a highly discussed one by metal fans around the world, but in the year 2022 we managed to get some great releases from Serbian bands as well, one of them being Terrörhammer's "Gateways To Hades". For this occasion, I've decided to speak with none other than the man himself, Vladimir Uzelac a.k.a. Pentagramator The Helltyrant, and ask him how has the last year of 2022 been for Terrörhammer, the overall reaction from fans on their European tour with Witchtrap, and what are the plans for the band in 2023. 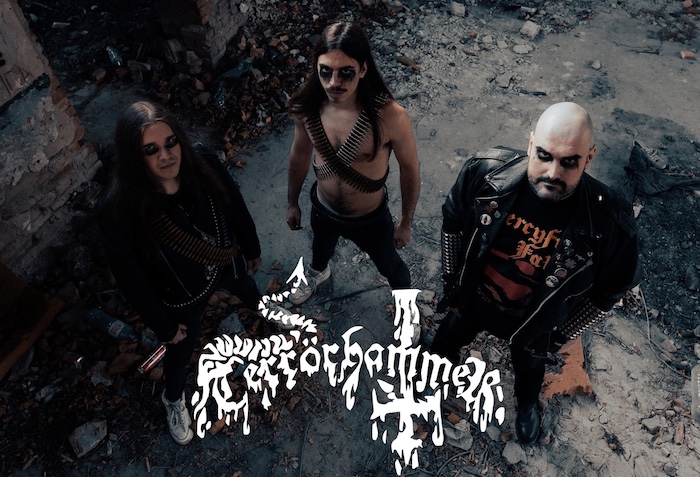 Greetings Pentagramator! First and foremost, I'd like to thank you for taking your time to do this interview and congratulate you on your success with "Gateways To Hades".

Salute and thanks, glad to be here.

The second full-length album has been brewing in your hellish chambers for quite some time and from what I've seen it was well acclaimed by fans worldwide now that it is finally released. How has the year 2022 been for Terrörhammer, especially with the new album out and the European tour you did with Witchtrap?

Unplanned, we've spent more time working on a new record than what was the initial idea. The first sketches were drawn already in the final production stages for Under The Unholy Command, but since then many things happened in a personal and a global way which slowed down the whole process. At the very end, we've got Gateways To Hades as an album we can fully stand behind in all of its aspects, from composition, performance, to the production quality. After all the struggle to complete it, 2022 was a perfect timing to unleash the record and set on a first major tour. Our brothers from Witchtrap proved to be perfect partners in crime and the 3 week tour was quite a success traveling all around Europe to deliver madness and mayhem while meeting so many old and making new friends.

What was the reaction from fans on your tour with Witchtrap? Was there anything interesting that you've experienced on the road that you wish to talk about?

A lot of intense memories and a lot of great feedback coming from various people we've met on the road. Gateways To Hades was streamed online just a few days before the tour started and it was a pleasant surprise to witness many people actually hearing the album before coming to the show.

Which songs on your tour setlist do you like playing the most and are there any songs in particular that the fans are crazy for?

Well that's personal preference depending on a band member itself. For an example I feel a strong thrill while performing some classical stuff like 'Hammer Of The Terror Cult' or 'Necro Speed Megalomania', I know Debiłczyna enjoys 'The Powers Of Darkness' a lot, while Necro Speed Apocalypso being a newest member to the club I would say he still feels this initial excitement just to play any music with us! As for the fans themselves I can say beside the classical material, we got a lot of great feedback for honoring the legacy of Lord Petrus Steele and our interpretation of Carnivore's 'World Wars III & IV' as well for some of the songs coming from the new album.

You also have a new fellow member in your necro speed hooligan gang, Necro Scum Apocalypso, could you please tell us how did he join your army after the departure of U-Predator 47 and how does he fit with the rest of the band?

After parting ways with U-Predator 47, we had an audition for a new bass player and Necro Speed Apocalypso came as a suggestion from Debiłczyna since they were already friends, familiar and into the stuff we were doing. It was very important to us that beside a good player we have someone to fit together as a gang of fucking bastards! I remember well that from the first notes he just bombed the place with his own crazy energy and we were like after a few minutes completely aware that he must take the spot. The tour that followed just confirmed many things and I can freely say that this lineup is perhaps one of the strongest in the history of Terrörhammer ever!

I've noticed that "Gateways To Hades" has a tad bit more heavy and speed metal style added to your devilish mix of oldschool black/thrash metal. Could you tell us what were some of the key influences that inspired you to incorporate this style to your sound?

Our influences from the world of music were pretty clear from the start and haven't changed much since. The style we play we label as "necro speed metal" and it's influenced from different sides of the global musical underground. First we have proto black metal cults like Tormentor (HUN), old Sepultura and Sarcofago, early Mayhem then Teutonic thrash wave bands like the mighty Sodom, Kreator and Tankard. Some classic acts like Black Sabbath and Motorhead are unavoidable, but also some early rotten speed metal like the first albums of Running Wild and Helloween are there, too. In the end there is a lot of punk and hardcore/crust stuff we enjoy like Discharge, The Exploited, GG Allin, Doom, Black Flag, Dead Kennedys but also some contemporary blackthrash like Nocturnal Graves, Absu, Gospel Of The Horns, Aura Noir etc.

It's been a few years since Terrörhammer officially became a member of the Osmose Productions family, could you please tell us how you managed to join such a big and successful label?

Without false modesty one should know that even with all the trickery and marketing magic it's the quality that wins and sells in the end. No lie can last forever and all shallow things get exposed in time. In the context of Terrörhammer we were from the very start solely focused on creating good and quality music, at least something we personally value and see as such. If you add a passionate dedication to it makes no wonder if you get the right attention from a bigger label or the public itself. It is the only natural way if anyone is looking for advice on this topic at all.

You're probably aware that the Serbian metal scene doesn't get enough attention from metal fans around the world, but Terrörhammer seems to have quite a big and respectable fanbase from other countries as well. How did the band manage to successfully reach such a pinnacle?

This one is a bit connected to my previous answer, but I guess the audience can easily recognize honesty, dedication and passion since they are all the integral parts of quality. On the other hand I don't think much about it and neither should any artist be obsessed much with these megalomaniacal ideas, but instead to pay attention to things I spoke about.

I know that there are a number of bands and projects in which you also participate, how do you manage to take your time beside Terrörhammer and work on any other music?

I can say that music as an art represents the most valuable and the most important thing in my life. For me, doing art is not just a hobby, but like an everlasting calling that I keep responding to from my early age and will most likely remain so until the very end. Considering this I feel inspired to express all the levels of my sensibility in and outside of Terrörhammer and I always find time for this.

Are there any bands you wish Terrörhammer to share the stage with someday and which ones would they be?

Yes and no. In the first place it would be an exciting thing to play with any of the bands we talked about being influenced by, but then again I don't see that as much important thing to do since there are some more valuable things we've already mentioned.

Now that 2023 is here, are there any future plans for the band this year or maybe a word of any upcoming tours?

Still early to speak about it, but we can reveal that our contract with Osmose has been concluded for 3 full-lenght releases meaning there will be at least two more albums released under the same banner. Our idea is to offer a slightly different perspective than Gateways To Hades on each of the upcoming releases and furthermore emphasize and broaden the image of the world that Terrörhammer belongs to, but this is yet to happen. Speaking of tours, there is some work in progress with that, still not close to announcing it, but if so it will happen outside of European soil this time.

Thank you for taking your time in doing this interview. Are there any final words you'd like to leave to your fans reading this?

Thank you for the interview, the support and the interest you show for Terrörhammer!
SUPPORT THE UNDERGROUND AND FUCK THE WORLD!