In The Woods... - Interview

In The Woods… have just released their latest album "Diversum" (read review here) which is slightly different from the rest of their discography. With Bernt Fjellstad they have a new vocalist on board but this is not the only different thing with "Diversum". I talked with their guitarist Kåre Sletteberg via Skype about the changes and what the future will bring. Enjoy reading! 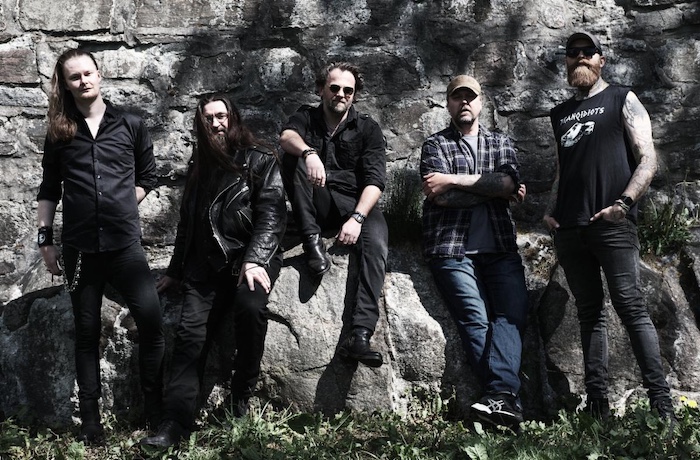 You are going to release the first album with your new vocalist Bernt Fjellstad. With 'A Wonderful Crisis' and 'The Malevolent God' you have already released two pre-release songs. How are the reactions about it and the vocals in particular so far?

It's good. The first song 'A Wonderful Crisis' is a very different track compared to everything on Cease The Day for example. It has more powerful vocal lines and he has some more clean and harsh vocals in there. I was wondering if people will accept it but it got a very good feedback. Also on the second single 'The Malevolent God' there was nothing but positive feedback for us.

The last time we talked it was just a little while after Bernt was introduced as a new vocalist. How much was he engaged in the song-writing process?

Well, he came in when about 90% of the songs were finished. There were no vocal melodies or anything to the songs before he started his work. So when he joined the band he wrote the lyrics, the melodies and when he had done his work, I did some guitar harmonies here and there. So he worked a lot on those eight songs and we are very happy with the work he did.

Regarding the fact that Bernt comes from around your corner, too and not like James from England – did that make the writing and production process easier?

I think it made the whole playing in In The Woods… easier (laughs). He is such a great guy and he just lives 20 minutes away from me. This is the first time I've been in this band that we have everyone in the same city limits which is very good.

You told me that you had five songs left that you had already written in February and three more to write. Did you change these plans or are these tracks to find on "Diversum"?

That's the five songs plus three new ones. When James left he took his three songs with him and we wrote new ones that are one the album.

Which ones are the newer ones?

It's 'Wonderful Crisis', 'Master Of None' which was the single that was released today and 'Moments'.

Listening to the album, I would say that the songs are much more hymnal than in the past and you have integrated much more classic metal structures…

Yeah, I mean it's not something when we sit down and write our music and our parts that we think of a certain genre. We only try to play what's best for the songs and what fits the song best. It changed a bit but for me it's a more diverse album with more elements of low and soft up to hard and heavy. I find it very cool because I think today in the metal community there are very many bands that it almost becomes boring because every song has the same type of feeling. There is nothing that is different.

What do you want to say with the album title?

Well, it's not too hard to figure this out. It ́ is a Latin word and it stands for a form of diversity. We thought about calling it after one name of the songs and then we thought that we don't have any cool song titles so we need to figure out something else (laughs). It's a different album and it's sort of a life story of In The Woods… to be different so that fits the whole project very well.

I think that you want to combine dark and sad things with a lot of hope ('A Wonderful Crisis'). At least the album may cause a lot of emotions in the listener. This you can also see in the album cover where life and death are combined through this dead tree and the blooming tulip, the leaf and the butterfly and the choice of very contrasting colors.

I totally agree with that. It's taken root in what happened in the last three or four years. The pandemic left us with almost nothing to do; now we have a war in Europe – so it's about the dark and the light and that even if things are the worst, if you forget the big picture and focus on small things that you will find some light and comfort. With the lyrics in 'A Wonderful Crisis' - it is always difficult to explain what lyrics mean because every listener will always have their own picture and emotion of the song. This is also something that this album does. The listeners will take that piece of lyrics and that piece of music and tie it to a memory of their own. So if I say something the people won't agree because they think of something else.

Apropos 'A Wonderful Crisis' – it reminds me much of Nevermore. The vocals and the gloomy guitar tunes. Is that a little tribute to Warrel Dane? And where is the spoken intro from?

Well, if it is, it's no purpose. As musicians you take inspiration from artists you listen to or have listened to a lot in the past. It's a great band and it might have happened in some subconscious way. The intro is taken from a Ronald Reagan speech. The idea about 'A Wonderful Crisis' was not as positive as it sounds. Going through a pandemic that affected everyone – something bad had to happen. Then we get the war in Ukraine which is affecting everyone, especially us in Norway and Scandinavia a lot and of course the Baltic's and so Bernt wrote this song. And the speech is also about what the song deals with, it's supposed to be like an indication.

Do the lyrics have a red line?

I don't think that when the songs were written that they had a red line but when you listen to the music and have a look at the lyrics you come back to what we talked about – the cover, the title and everything being dark, gloomy and the things to focus on to see the good things. You know that not all is hell, death and all that and seeing that there are actually also some bright moments anyway.

A title like 'The Malevolent God' is quite unusual mentioning religious aspects – I guess this is something you didn't do before.

That's right. It's different and this comes with the person who wrote it and the singer. The early In The Woods… were more pagan stuff, think about Valhalla, Thor and Odin and everything combined with that. We had James with more philosophical lyrics and now we have Bernt Fjellestad who does some more down to earth lyrics.

'Your Dark' almost turns into a pop song in some parts – do you want to reach some new listeners with that?

No, when we do it we don't think about things like that. We only write our parts and we take what we feel. We don't have any boundaries that we stick to. We trust each other 100% in what we put into the songs and that's the outcome of the album. So that's a fucking dark pop song (laughs)!!!

What are the near future plans with ITW? Do you want to release a video, more singles or do some touring?

We are in discussion to try for the first time in In The Woods… history to make a full production video with a professional editor. But after the pandemic the government is not giving money anymore and the production costs a lot of money. So we have to see how we can do that but we're planning to make that happen. Hopefully we can release a live shot but edited to fit the studio rehearsal of 'A Wonderful Crisis' if we get the video shots we want. So hopefully we will put out two music videos for the album if everything goes out to plan. Touring is also difficult because there are so many bands on tour right now. Everybody has two years to catch up, also the summer festivals are two years behind. We changed our booking agency and now we're working with a German agency and we're hoping to do a tour at the end of March/ beginning of April in Central Europe to support the album and we're started writing the next record as well.

Well, that sounds promising! Thanks for the interview!