Now that just about all of you Viking Metal fans have had a chance to listen to Thyrfing's latest opus, I think it's time to let you in on what the creators of such a good album have to say about it. This interview was done by e-mail with Patrik Lindgren who brought us an unforgettable moment of mystery and mythology. If you were amongst the ones who did not had a chance to discover them, my only hope is that these words will drive you directly to your record store and share with us the pleasures to be found. 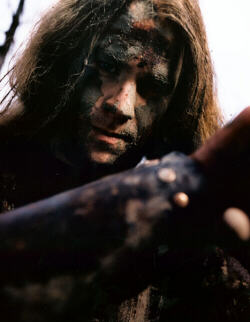 Now that your last opus "Vansinnesvisor" has been out for a few months, I guess this period allowed quite some good feedback for you guys. Was the effect as good in Europe as it was in the States?

Yeah, the response has been extremely good over here as well. Some "older" fans might have been surprised about the direction of this album, but after they get use to it, it seems like most people embrace it; calling it their favourite Thyrfing-album, album of the year etc.

Your name comes from Ancient stories and mythology. Is it a passion that all the members share?

More or less, yes we do.

What about the photo session?

We wanted something dark and "filthy", more miserable, to go along with the general feeling of the album. We decided some mud and blood would truly extend this feeling, and the shots turned out really good I think.

Was it your idea?

Yeah, it was. And if I remember it right, Thomas and Henrik were the driving forces behind the idea...

How was it to take on a Viking 'role' and going to that limit and having pictures taken up in the woods or even in water?

It's not like you have to go into a "role" or something... I mean it's not like we are walking around looking pissed and serious between the shots. This is artistry, a way to improve the overall impact, and feeling of your music, so it's not a problem. It was damn cold (December actually) and the water was freezing your balls off... but hey...all for the art they say?

With this album you are sure to reach quite a wide range of music lovers. Would you describe yourself as trendsetters in viking metal or was this for you the next step as a mature band?

In a way, I think Thyrfing has always been a quite unique and independent band when it comes to sound. Now, I feel that we have come even further in our musical world, and really found our own style. Of course it's flattering to see people mention you as one of their influences, but I wouldn't go as far calling us "trend setters". But I'd of course prefer to start trends, than following them... 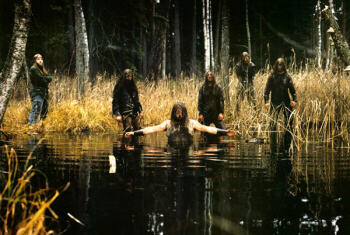 For me (as a French Canadian) foreign European lyrics add a dimension of mysticism in music and I appreciate that. For you, what was the main reason for using Swedish lyrics?

We have used Swedish lyrics, for as long as this band have existed (7 years), so we are quite used to it... We are comfortable with it, and it's one of the strongest parts of our identity. It brings forth a more original and organic feeling, than the English language, which you hear everyday on radio, TV etc.

Were you insecure about how the reaction would turnout in general?

Not at all. As I said above, this is nothing new for us.

Was it for you a potential loss for a worldwide market?

Well, maybe it's not that wise commercially, but also some people find it exotic, and couldn't imagine the music without it.

Two songs are in English. Any particular reason for that?

As we've always used both kinds of lyrics in our albums, we saw no reason breaking that tradition. We always use the language we want to at the moment. No particular reasons or rules...

Where these composed in English already?

Yes, we would never translate any lyrics. Our English isn't that poor...

How do you usually work out the compositions?

It's really different from track to track. Everything between something composed and arranged by a single person, to some total jamming at the rehearsal place. The general order is: 1. Make the riffs, melodies and basic corner stones. 2. Arrange, rehearse and improve at the rehearsal-place. 3. Add harmonies, additional melodies and vocal arrangements. Well, some things might change in the studio after that as well... But this is how we usually work.

Are the lyrics written first or is it the music?

In most cases, we start with the musical arrangements, and after that add vocal lines. However, the lyrics might have been written months ago, but it doesn't have to mean we write the music after it.

Ever since I started listening to metal music, I noticed that most of the best bands I was enjoying where from Europe like Norway, Sweden, Germany for instance. How can you explain this phenomenon?

I guess it must some kind of chain-reaction. If you see people you know or hangout with suddenly get a record-deal, you realise that nothing is impossible. If people help out each other, with gigs, guest performances, inspiration etc. all bands are getting better, and that's probably what has happened in these countries. Also (at least in Sweden), musicians have very good financial support from the government. 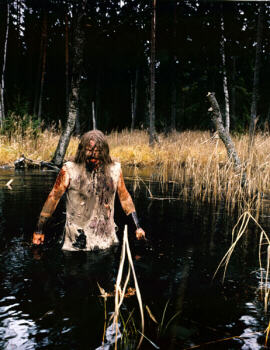 Are you guys fan or maybe friends with any of them?

Yeah, of course. I like tons of Scandinavian and German bands. Who doesn't? We have some local friends here who help each other out now and then for example Raise Hell, Hatework, Mörk Gryning, Sins of Omission etc.

What do you think of today's popular music?

If you compare to the 70's and 80's the popular artists of today, they don't seem to be musicians at all. Good dancin', a pretty face and a body in shape seems to be enough. The rest is taken care of by the producer and studio musicians. Sadly, this is how it works, and we have to be glad there's still a scene for underground musicians who play music from their hearts and soul.

Is there anyone or band amongst them that you like or maybe totally dislike? It's ok if you want to tell me that you can't stand such and such singer or band.

Hehe... people who get big heads after their so-called "break" don't deserve any respect. However there are dozen of bands and artists who make/perform crappy music which I hate. Can't say I dislike them as people because of that though. If they like it themselves, and make other people happy... why not?

Do you think about coming in Canada for a tour in a near future?

You never know, but the situation in North America has been very bad for Thyrfing 'til now. That made touring there, economically and practically impossible. However, it seems like things are getting better and better, we have a new promotion agency there, and the new album gets really good reviews, attention from the media etc. We'll see what happens...

If so, is Montreal a city you would like play at?

Yes of course. We would be up for any city wanting us to play there!

The last words are for you. Anything you'd like to add or say to the world?

Thanx for supporting Thyrfing, we appreciate it ... Also, cheers to all fans listening, drinking, banging, fucking, analysing, admiring, and living to our music. See you in Valhalla!