Immolation. Just the name of the band is enough to send other death metal bands home. With quite a history of hard work and multiple albums under their belt, Immolation continues to move up the ladder of success. Recently they signed with Century Media Records, a step up according to guitarist Bob Vigna, Immolation's guitarist. Now they've got a new album, "Unholy Cult," and it is without a doubt Immolation's most praised piece of work yet. Read on. 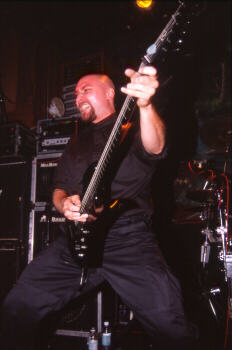 First off, I've just got to congratulate you and the rest of the guys in Immolation for "Unholy Cult". It is easily one of the best death metal releases of the year 2002. Excellent work! So, How has the response been to the new material from the magazines or the fans that you've been performing for whilst being on the road?

Thanks for the cool words of support Allan, we appreciate it. The reaction has been really good. This is probably the first record that we have done where we are actually getting an overwhelming high response from the magazines, not to mention the fans. They are always supportive, but they really like this one a lot! We did two tours recently, one in the US with Vader, Berzerker and Origin, and we just finished the Xams fests in Europe. The reaction to the new material at the shows was especially good. I think there were many who had not heard "Unholy Cult" yet, but you could tell they really dug it!

Does the new material come out well in the live setting?

Oh yes, it sure does. We are at our best live. The newer stuff probably goes over better and actually comes out better than a lot of our older stuff. The new songs are just so much more powerful it really comes across live.

What are your thoughts on "Unholy Cult" after you've finished it and had some time to let it sink in? The best work yet for you guys maybe?

Oh definitely our best yet. I think that's what people have been getting excited about. They know that each release we put out gets better and better. They are confident in us and look forward to our new material. We always try new things and bring something fresh in, and with "Unholy Cult" we did that better than ever before. When we heard it for the first time, we could hardly believe how good it came out. Paul Orofino is the man!

Since the inception of Immolation how would you say you guys have grown, or improved?

Well we have matured a lot as musicians and as people of course. The more we create new music the better we get at it. You learn a lot from album to album. You see what works best and how to improve on things. Ross and I really fine-tuned each song right before we went into the studio. We wanted everything to flow, and this helped a lot. We would lose all the unnecessary parts or measures and concentrated on making each song direct and to the point.

More specifically, how did Immolation try to perfect their craft for "Unholy Cult," and how do you think that it differs with its predecessor, "Close To A World Below"?

Well it's what I just mentioned as well as just being as creative as possible. We strive to make dark music, but we want it to be interesting and meaningful too. To us there are no limitations. As long as the feeling you are trying to get across are there that's what matters. "Unholy Cult" takes what we did on "Close To A World Below" to the next level. We made sure the production was clearer and more intense, we added more layers to the music and broadened the lyrics a lot too. The lyrics on "Unholy Cult" are less specific, yet they have a lot more to say. They are more personal and more open to interpretation. They deal with religion, but more about what we see in the world today and how we are as people. 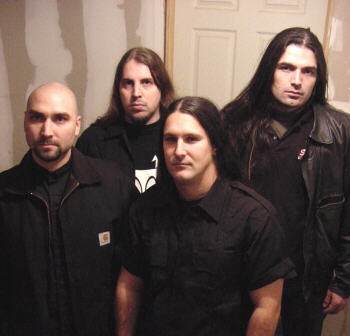 What kind of influences play into shaping how Immolation sounds? Is it limited to music?

There are a lot, but I would have to say that a big factor in our being so unique is that we are very open-minded people. We listen to a large variety of music and this really helps us to be more creative in our own. We listen to everything form Bjork and Tori Amos to Jazz to early classic metal like Metallica and Iron Maiden and newer metal like Korn, Slipknot and System of A Down. I personally like to listen to new music. I can't just bury my head in death metal or old school bands. I love all the classics and I like death metal and black metal when done right, but there is a big world out there, and to hear what other things are going on is very inspiring. What we want to do with Immolation is really open up a new territory of metal - taking it to a completely new and indescribable level. There are plenty of other things that play a part in it too. Just life in general, the things we see around us, especially after 9/11. It is just proof of what extreme misuse of religion and leadership can cause.

Where do you think Immolation stands in the death metal genre? Certainly you guys are one of the leaders of the pack, but do you consider Immolation to have the upper hand, so to speak, in some aspects of the music?

Well we do what we do and we do it well. I think we are one of the few bands that are actually trying to make an effort here to move this genre forward, that’s for sure. We feel we have just skimmed the surface of our potential and are very excited about our next release to come.

Has anything changed this time around in terms of the lyrical concepts? Are there any specific ideas that stick out?

As I mentioned earlier, I would say we really have created some interesting lyrics here. They are very broad, but have much more to say than ever before. "Unholy Cult" definitely revolves around the current events of the world, like 'Of Martyrs and Men,' 'Sinful Nature' and 'Bring Them Down.' Even the title track 'Unholy Cult' can be taken in many different ways. We look at the cause and outcome of extreme religious ideas as well as the problem of power in the wrong hands. I hate to go into it too much. You just have to read the words yourself, and you will get your own ideas of the meaning. That's what we aim for. These words can relate to anything, depending on how each person takes the song.

What's the song writing process like for Immolation? Does one member tend to write most of the material, does everybody make an equal contribution, or what?

I come up with all the music and the initial song structures. Then I show what I'm trying to do to the rest of the guys and we get it down and see if it works. Sometimes we add parts, or make changes. On a rare occasion we scrap the whole song if it just doesn't work. That happened this last time. And in the end many of those parts made their way into the last track where they worked perfectly. The fact that we work on it all together helps to find the best material. Once the music is pretty solid Ross starts working on lyric ideas and song titles. I helped out with that as well, titles and lyric passages. And in some songs we would both have a number of paragraphs, and they would just fit together, like in 'Unholy Cult' and 'Bring Them Down.' We are coming from different angles and then everything fits together to make it complete. It's funny because we will have some things that are finished and as we rehearse them and Ross and I both realize certain parts are not working, and they are the same parts. So we really have close perception on how we want the songs to be, how we want them to feel. 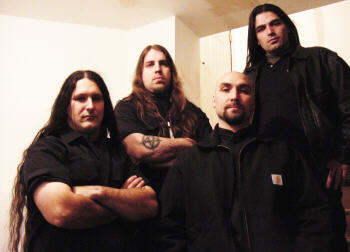 What's most important for the guys in Immolation when you put the music together? Do riffs come before solos, do you care most about the atmosphere, whether or not the album is cohesive, etc., and other such things.

Once we are done with the actual song structure and riffs from beginning to end, and the lyrics are ready, then I work on the leads. And since by the time that happens we are usually in the studio recording, it can get a bit stressful! To me when writing I cannot even think about the leads until the whole song structure is done. I have to be happy with the song as a whole. This way I know Alex and Ross are good to go. We all have an understanding of the song. It's at that point that I start working on the leads. It's more important that the song is done and flows right, the leads I just write in the studio or on the spot when recording. Sometimes being more spontaneous is better for the solos. You tend to capture things you normally would not write.

Have you guys been happy with how Century Media has been treating you guys, as opposed to Metal Blade who you just left not to long ago?

Yes we are very happy with Century Media. They have really showed a lot of interest in the band as well as positive support, and Listenable Records in Europe is doing a great job as well. We are the labels top priority, which was needed. We are happy to be in this situation. We have our best album of our career here and it's good that there is a very positive support from those who are releasing it.

What's next for Immolation? Are there any goals you've set that you haven't reached yet?

We feel we have just begun. Our goals are to really bring some new sounds into this music and show those who are not familiar with it just how powerful dark metal can be. We are planning more touring for the next months to come, both in Europe and in the US. We hope to tackle a few places we have not been yet before too.

What albums of 2002 have you been the most pleased with?

"Unholy Cult" of course! Haha! What an asshole I am!

Well, thank you for your time. Again, "Unholy Cult" is one hell of an album and I congratulate you and the rest of the guys on it! Any final comments?

Thanks a lot Allan for the cool interview, we appreciate it! Thanks to all those who have stuck with us over the years and we hope those who have not will check out "Unholy Cult." It is a metal experience that you will enjoy!