...It’s been 3 years since their last studio release... While it might seems like a long time, "Intermission" bonus record in between, butt load of albums from hundreds of bands and with thrilling word events time passed by so fast that what seemed to by an everlasting break turned out to be just a little longer pause between tracks. On January 27th Stratovarius came back with not only their newest child "Elements Pt.1" but they already completed most of the work on "Elements Pt. 2". I talked to Jens Johansson (keyboards) about the break, new albums and American music pirates that eventually might (or not) prevent Stratovarius from playing live in States. 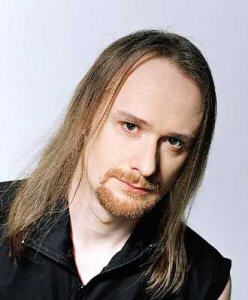 Did you enjoy your time away from Stratovarius?

I did, it was very nice. I mean we actually played some gigs in the meantime so our break wasn't completely serious but yes, it was nice to take this break. Nice for everybody and everyone was motivated when we went back to work to record this album.

Please tell me the truth, did you guys take a break because of album, tour, album, tour life style or were you simply sick of each other?

I think that was album tour thing. We really had been doing this for 5 years or so and everyone was sick of traveling, especially me.

Did a thought of breaking up ever come to your mind? Did you guys discuss this possibility?

No, but we discussed this in a lot of interviews because people were asking about it. [Laughs] No, that wasn’t really a plan. A lot of people said that but that wasn’t true.

What have you been up to during those years? Did you work on any side projects like other band members or did you concentrate on spending money from your gold albums?

Yeah, that's it. [Laughs] Two guys made solo albums, which if you ask me defeats the purpose of taking the time off but on the other hand during last 5 years we didn't have any time for anything else but Stratovarius, so I can understand that. I don't really care, whatever they want to do... I took it easy. Watching movies, painting walls in my apartment... and there of curse was this September 11th attack and nothing really happened for good 6 months cause everyone was sitting around, scared...

Some critics were saying that your time off was caused by lack off new and fresh ideas. I think your new album can put that rumor to the rest but how much do you think Stratovarius has left in its tank?

I think we can go on for a long time but the question is for how long will people want to listen to us? If you work in a very specific type of music like we are people might get sick off it eventually because you changed too much or you didn't change enough. As long as people will like our stuff we'll continue doing it. I think the guys in the band and especially Timmo will always do some sort of stuff but it might not always be metal.

Are you guys unable to fulfill you musical desires in Stratovarius that some of you form side projects?

That's the thing about side projects... you can explore different styles. It’s not like you can have only one dream or inspiration... 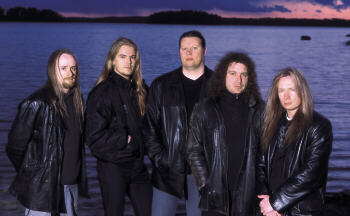 I can understand that but I was really surprised when after all this talk about taking time off, album-tour, album-tour life style I see two members ready to go with solo albums. Who's tired of writing the music and touring than?

[Laughs] I though that was a little bit crazy... but both of those guys were able to record their stuff at home so there was no traveling involved and that was especially important for Timmo because of his family. So, I think it was important for him not to tour for a while. No long Japan or German tours, no drinking, screaming... it was more civilized not usual rock 'n roll stuff. [Laughs] Plus, I don't think he spent a lot of time on this solo album, maybe a couple of weeks. For him it's usually quite easy to write songs and for this project he got right people for this type of music so the whole process wasn't long at all. It's like with everything else if you delegate responsibilities to the right people they would make the right choices so you don't have to manage everything. I don't think that was very stressful. I think Kotipelto's solo album was a lot more stressful. He had to learn a lot of things... In Stratovarius we're not as responsible as Tolkin is. He’s basically the guy who's holding it all together. He's a producer; he's arranging bookings, tours, studios and every single detail that comes along. So, I think that maybe it was good for Kotipelto to learn that whole process which I think he did and with his next album he'll have much easier time. There were very good learning experiences for both of them.

Do you have any rules or boundaries regarding Stratovarius music that can't be broken in order to keep your unique sound?

I think there probably are. Other than basic rules like on each album we have drums the main rule that most probably will never be broken is that the songs will always be melodic, blues like based. I think if we would make something different than that it shouldn't be called Stratovarius. 99% of the people that buy our records expect guitars, drums and very melodic tracks. They'd probably get very angry if we made a grungy record or something like that.

When you listen to the new album you can always say that's Stratovarius but apart from typical fast paced tracks I find this record more diverse than your previous efforts? I'm not talking about fast-slow ratio but overall more epic feeling; was it something you planned when you recorded "Elements, Pt.1"?

Not really, I think it comes from the fact that the tempos are much slower and when you have more space between the notes you can put more stuff without making it too complicated or muddy. It wasn't really a conscious decision it just happened this way.

How was the overall atmosphere before recording process of "Elements"? Can't you guys wait to get together and work on new material or would you rather have some more time off from each other?

No, everyone was very exited to get back to work and that was also a very good thing about the break cause everybody was very motivated. If we would have gotten together in 2000 or 2001 whenever it was after the last date of the "Infinite" tour that really felt like it was infinite, we were joking about it as never ending tour; the album would have been terrible or at least the feel of it. Maybe with the hard work we could have made it good at the end but everything is much better when it comes natural. 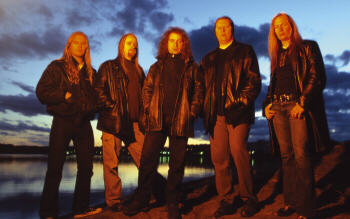 After 3 years break did you have so many ideas that "Elements" was broken into parts and we'll see continuation of Part 1?

Is this a secret or you don't want to talk about it?

No, part 2 is almost already finished. I don't think there's going to be part 3 but part 2 is going to come out around December or January of next year. Everything except vocals is almost done and I think it's even better than part 1.

Is there a concept behind the title? What are the "Elements" stand for? Based on the cover and track titles Part 1 seems to stand for fire, winds and water. Will there be a connection with Part 2?

This is very strange... It's like a double concept album but it doesn't have a real concept... it's a very odd thing. The second album doesn't have anything to do with "Elements" and I really don't know how the fuck we are gonna get out of that one but... basically it's only called "Elements" because of that one song on the first album. In reality it's a giant 25-song album that is split up into two albums released over a year.

Well than, are you ready to hit the road again?

Yeah, I think I feel motivated enough. Believe it or not I didn't think I would say that again. The playing part is always fun but the traveling will really get you.

So, where can we see you? Are States on the list of your touring plans I'm sure the rest of the world is?

There is possibility in the fall; maybe... it's still up in the air. I'm talking about Prog Fest but we might also skip Prog Fest and do couple of shows in big cities like New York, Chicago and LA or something like that. It's a very hard decision. I don't know if you knew that but "Elements" was available on the net before the actual release date so, we took the opportunity to try to figure out what country is actually downloading our music the most and US is very high on the list and as you know touring is for promoting the sales and if there's no way to help record sales maybe there's no point of touring so much. It's a very difficult decision but it's being talked about. We know we'll make money on South American tour so then we'll have to justify how much of that money we want to gamble on making some shows in the States. There are other issues too, some of the guys have never been in the States and maybe they'll want to come just to check it out and treat it almost like a vacation. Fuck CD sales, fuck it if everyone downloads songs, lets see skyscrapers in Chicago, whatever.

I hope you’ll think of something and for whatever reason we'll see you for at least few shows.

I hope so too.