In search of information on Crocell I stumbled upon this text in Wikipedia: "In demonology, Crocell (also called Crokel or Procell) is the 49th spirit of the Goetia, manifesting as an angel with a tendency to speak in dark and mysterious ways. Once a member of the Powers, he is now a Duke of Hell who rules over 48 legions of demons. When summoned by a conjuror, he can warm bodies of water, create the illusion of the sound of rushing waters, and reveal the location of natural baths. He is associated with water". After reading this I started wondering if it would be safe to say that this is the one that inspired name of the band? If so, why him? Let’s find out. 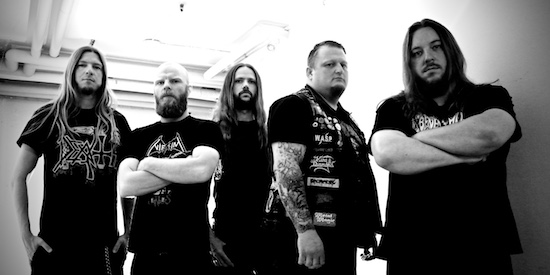 Thanks for taking time to do this, how are things in Crocell camp right after the release of the new album?

Andreas: Things are great just now! We have been really busy these last months in order to prepare for the release, and at this point it begins to bear fruit, reviews are coming in, and the feedback has been really good so far.

Is Denmark still cold this time of the year?

Andreas: You bet - winter has come, and it isn’t over yet. A couple of days have had this slight scent of spring, but now it’s all freezing again.

Kussen: Finding a (decent) band name is hard, and almost every name that you can come up with, is already taken by some shitty rapper, German heavy metal band or Japanese techno ensemble. In all honesty I don't remember exactly why we chose "Crocell" but I think it was a combination of a wish for something sinister sounding (Crocell, as mentioned earlier, is a demon) and something not too hard to remember/pronounce.

All of you play or played in a bunch of other bands, what was the catalyst for the creation of Crocell all those years ago, do you even remember?

Andreas: Well, Ken Holst (now in Illdisposed) and I used to play together in the melo-death band, Compos Mentis. In 2007 he decided to start a new band with the explicit aim to play some faster and more brutal stuff. He quickly gathered Magnus, Tommy, Onkel Kusse and I, and it turned out to be a good match, so a year and a half later we released our first album. Since then Asbjørn has taken over the vocal duties, and Rasmus Hexen Henriksen has replaced Ken on guitar.

I was wondering how you handle working on new songs. Is there a decision maker/leader/tyrant that picks and chooses the best bits, or is everything being peacefully agreed on?

Andreas: "peacefully" might not be the right word, and sometimes something is veto’ed through, but usually we don't have any problems discussing our way to the best bits.

How about actual creating of the music - is it a bunch of guys actually in the practice room, files being shared, or is it something else entirely?

Was there anything that you did differently in the writing process of Relics compared to the previous albums?

Andreas: Maybe we have started up some more songs via file sharing this time, and most of the songs on Relics have been composed by only two or three of us, before all five of us finished them during the pre-recording sessions. I think you can actually hear that on the album, in so far as the single songs are really focused.

How did you make your decision when choosing the album cover - tell us about the process?

Andreas: Actually we didn't do much to choose the design ourselves, apart from insisting that our C icon should be a central element. We talked to BF.B, who had previously made some cool stuff for Metal Magic Festival, Vomit Angel, Ligfaerd and Departed Souls, and we left it to her to come up with something. A myriad of crayon dots later, we had the perfect sinister artwork to complement the music.

Andreas: I would say that the music is the darkest and aggressive stuff that we have ever made, and therefore the artwork should be dark and dismal as well. The connection between the lyrics and the artwork lies in the album title, Relics, a word which shows up a couple of places in the lyrics.

I don't own the album just yet and there's no lyrics sheet, so can you tell me about the words a bit?

Asbjørn: Well… the lyrics are a sinister view into the future based on today's planet-choking agenda. All of the lyrics, in one way or the other, take its shape in the world that the humankind is creating through wars, tyranny, religion, politics, etc. We use a lot of references to both ancient history of religious laws and how this still affects modern politics and the affairs between world leaders. I think that this is one of the reasons why we chose the title Relics for the album.

Andreas: The title can either be understood in its literal sense (as supported by the album cover), or as a symbol of all the destructive and life-denying values that have been handed down to us through the history and that we for some reason can't let go of.

In your opinion, is 'Once Called Slaves' the best representation of Relics and the new album? Is it why it ended up being your promo video?

Asbjørn: We decided to use 'Once Called Slaves' because it holds both fast blast parts and grooves from the world of death metal combined with an eerie intro of rhythmic power. I think that these elements capture a lot of the stuff that forms the album, and that this makes a great prime for Relics. So yeah, 'Once Called Slaves' is definitely one of the best tracks to represent Relics.

Who is the axe swinging chick in the video, what is the whole thing about?

Andreas: the whole video storyline is written by the director, Lasse Frisk from Frisk Film. We met with him to discuss some ideas, and after that we gave him our music, lyrics and graphics and let him loose. After spending hours and hours creating the puppets and shooting and editing around 15000 stills, this was the result - and needless to say, we were stoked when we first saw it! As for the chick, my personal interpretation is that she is the hero of the story, in so far as she succeeds in revolting and turning her back on all the lies and horror that is fed to her - and all of us - by the powers that be, the priesthoods and the mass media.

While we are on the subject of your videos, what is being shared throughout the entire 'Tyrant Of Iron' video and how can I get in on it [laughs]?

Andreas: Ha, that would be Onkel Kusse's infamous schnapps, flavored with all kinds of secret stuff. Should you ever get to see us live, you will surely get the chance to have a taste.

Will you follow the release of the new album with some touring; are there shows on the agenda yet, and most importantly - any USA dates?

Asbjørn: Yes, we've got some shows in the calendar and there are still more to come. We will be doing shows in Denmark and hopefully some shows around Europe as well. We don't have any shows in the USA but if the opportunity comes up, we will be glad to take the trip across the pond.

Onkel: We all have jobs. Nothing better than a bit of nine-to-five relaxation to unwind from the busy heavy metal lifestyle...

[laughs] Now from a slightly different angle: Andreas, on the latest Phantom album you're credited with drums, keyboards and ….. Cello!!! Do tell more please!

Andreas: Well, I have always been "musically curious" and at some point in the mid-twenties a friend and I got the idea to start playing the cello. After having spent years playing metal drums (faster, harder, louder!), it was a great challenge to try to play classical music on a cello. I think I got to being ok, but it has been way too long since I have played the cello, so it would most likely sound terrible if I gave it a try these days.

What other instruments do you play; can they be heard on any of the other Crocell albums?

Andreas: I can get sounds out of a lot of instruments, but I wouldn't say that I can actually play any other instruments than drums. I do write some guitar riffs, and on the Crocell albums I have played a few piano things here and there, but that's about it.

Thanks for your time and good luck with everything. Last line belongs to you.

Andreas: Well, thanks for taking the time to talk to us. We are really looking forward to going out there to present the new material live, and my fingers are crossed that we will get the opportunity to visit the States at some point.