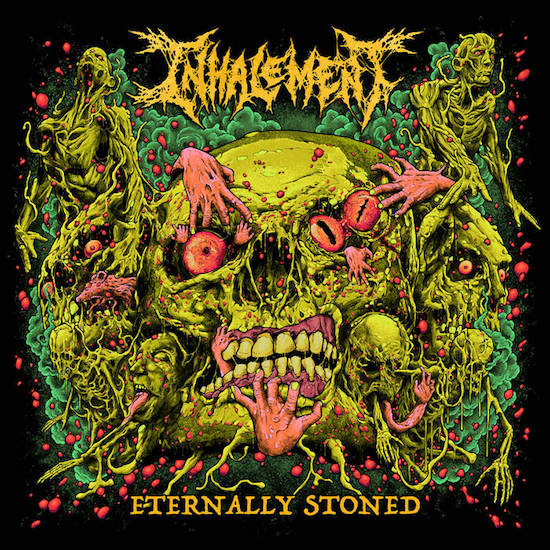 For all the ridiculous adjectives we could apply to death metal, they never do take away from the fact that it has been done before many times over. This genre is ancient it seems yet bands come and go either trying something new or just like paying homage to the days old. Now that's out the way, it's fair enough to say that INHALEMENT lands somewhere between paying homage and doing their own thing without appearing overly experimental. For a categorization I guess you could say the band's upcoming EP Eternally Stoned flirts with brutal death metal, modern death metal and thrash metal. All these subgenres are relatively common knowledge to even the least of metal heads, however when merged, you could say that as a complete unit, the cosmetic result could be a bit of a debate for even the experienced.

Following traditional death metal opening, 'MJ Ultra' brings into effect an old school thrashing to steer the way of an effective introductory track. The vocals are convincing, the drumming is punchy and the riffing is fun. For what it appears to be thus far, the music is well within the line of traditional death metal. However, 'Unsmokeable' accepts the invitation and shows up to the party decked out in a slam-like, brutal form of death metal aesthetic, despite still having the elementary customs of traditional death metal activated conspicuously enough to notice. Riffing accentuations supplement the dual vocals that then take a downward plunge momentarily into slam territory, with the gutturals seemingly becoming more abdominal in connection with the breakdown chugging of the guitars. A seesaw-esque incorporation of these utilities, however balance remains a key ingredient of this entry's success. More of this is called into play on 'Drowning in Reclaim', yet still on the heel of the music's footing while the thrashing death attack assumes the driver seat with a few pinch harmonics to take a whack at the listener.

I'd have to give 'Drowning in Reclaim' the award for the favorite off this 13 minute carnage segment. It's all the best facets exhibited and put into overdrive and executed much better. Freight-train guitar chugging chords at select segments, an added layer of intensity via the uneasiness of the drumming diversity and the vocals toggle in war-like fashion between snarls and deep gutturals. Overall the album is ugly, the production is clear and helps to give Eternally Stoned a stomping sort of vibe that moshers would easily fall for. The artwork is as I would expect from an album as brutal and crushing as this is and holds up well in representing the instrumentation that sounds like spears being driven through wet sponge. Might want to look out for this one out one.