I have to confess that I never was a huge fan of Blaze Bayley and don't own the two Maiden albums with him on the vocals but I took the chance to see him live this evening nevertheless. Arriving at the location I was first of all pretty impressed about this building. The Piano is a bar where once you enter you go into this huge 1900-style hall with a fantastic stage with a lot of stucco art above and a really historical atmosphere. And in the room between (and that surprised me even more) Blaze Bayley was sitting, giving autographs very patiently until the show started.

The band that played before Blaze was Absolva. This means that the four musicians who would also play with Blaze did a gig before the main gig. Quite amazing, especially in hindsight because the temperature in the hall was pretty warm and playing almost three hours must have been very challenging for the guys. But coming back to Absolva – they played pretty nice classic heavy metal in the style of some well-known NWoBHM heroes. The performance was pretty tight and they had a convincing gig here. Guitarist / vocalist Chris Appleton did a fantastic job and didn't appear to get tired playing some stunning solos and doing a lot of crazy grimaces. I wonder why the guys from Manchester aren't more popular because the music and the gig was very entertaining and not too much over. 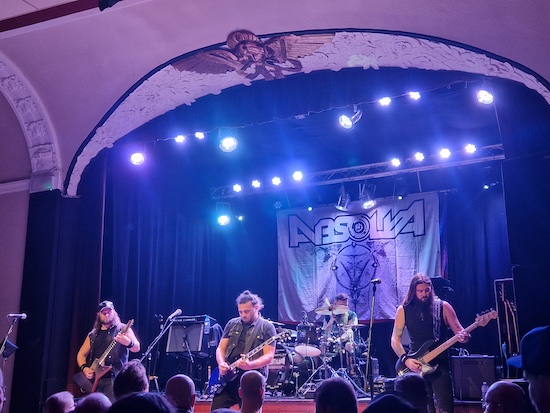 Setlist Absolva: Fire In The Sky / Burn Inside / Addiction / What Does God Know? / Never A Good Day To Die / Legion / Burning Star / Rise Again / Code Red / Refuse To Die / From Beyond The Light

After a ten minute break to cool down a little bit Blaze Bayley entered the stage to open his European tour right here. He already played at this location and as far as I've heard, he must have fallen in love with it instantly.

I must say that I was pretty surprised to see how old he became through these years after being part of Iron Maiden. He looked a little bit like a metal version of Charles Darwin that evening. Nevertheless he started with full power and knew how to interact with the audience. Telling a lot of stories, always being humble and grateful about the fans and their support he (and the other guys) appeared very down-to-earth, authentic and charismatic. It seems that he considered the audience as a real part of the band because he always demanded some shouts, raised arms and even divided the crowd into two parts and performed a screaming competition. That was pretty much fun and the band really enjoyed it, too. About the music- the band played about two (!!!) hours and performed a lot of the classic Blaze Bayley songs and even ‘The Man On The Edge' from The X-Factor by Iron Maiden. A lot of people were pretty much surprised about that and celebrated that. But also songs like ‘The Man That Would Not Die', ‘1000 Years' or ‘Witches Night' were highly welcomed in Dortmund. Apropos Dortmund, it was pretty cool to see that people from pretty far away also took part in that event – a French father with his maybe 6-year-old son was in the audience just like some Dutch guys standing next to me. Maybe this is some better way of international understanding than threatening and bombing other nations……so well, around 11.30 PM the concert was over and I have to say that my opinion about Blaze Bayley has radically changed. Maybe I will try the two Maiden albums again now! But I will for sure attend the next time he is somewhere around the Ruhr Area. 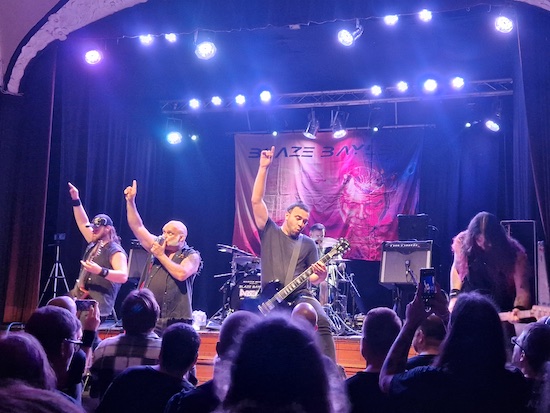 Setlist Blaze Bayley: Ten Seconds / Kill & Destroy / Watching The Night Sky / War Within Me / Pull Yourself Up / Warrior / The Power Of Nikola Tesla / Virus / Witches Night / 18 Flights (+ Solos) / Silicon Messiah / The Man Who Would Not Die / Man On The Edge / Futurea l / Blood And Belief / 1000 Years