In The Woods... - Interview

Norwegian black metal legends In The Woods… lately announced that they got a new vocalist. Curious as I am, I couldn't resist asking the band for an interview and so I got the chance to talk to their axeman Kåre Slettenberg via Skype. I got quite a lot of interesting news about the band and the maybe most interesting information that the band is currently working on a new album. But it's not as easy as it seems - just read for yourself! 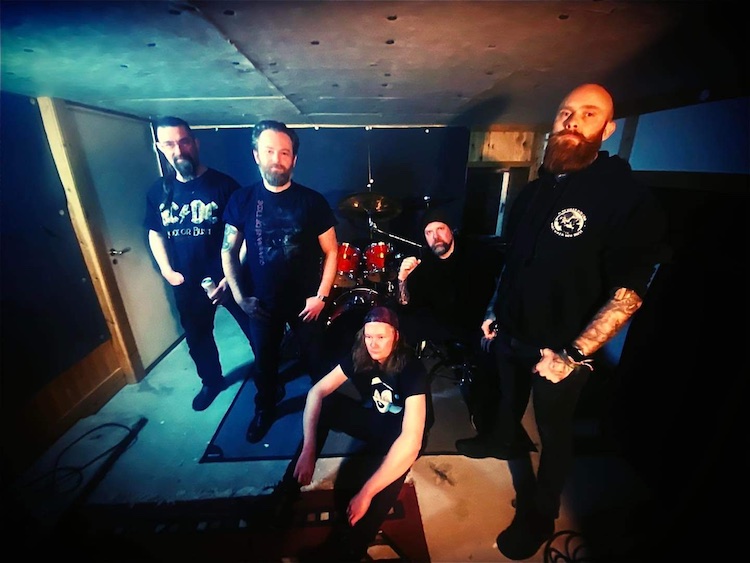 Hi Kåre, how are you doing?

I'm doing good! It's Sunday and I'm preparing for a new week, that's all.

You just found a new singer for In The Woods…, namely Bernt Fjellestad. Can you tell me a little bit more about him?

We've been working with James since I joined the band and he decided to leave the band. So, we had to try to find a new singer. We wanted to get one from Norway because of how the situation has been in the last two years where you couldn't travel. It has been very hard to keep the whole band thing going. We all agreed that if we find a guy from Norway and he can sing and do what we want there is nothing better. So Anders Kobro started to talk to a lot of people and we had like two or three names on the list and these were the people we wanted to go for. We had one in Sweden and two in Norway and we had a meeting with Bernt Fjellestad a couple of weeks ago and introduced him to the new material that we have. He took one of them with him and sent us the track in return a couple of days later. And it was just wow! He played with Anders in Susperia twenty years ago and in Guardians Of Time which is a totally different genre than we are doing but this all shows what he has become. He is a strong vocalist. When we got the songs, it was pretty easy (laughs).

Why did James quit the job?

That's a tough question. I think it was more personal for him, it was quite difficult for him, especially these last two years with not being able to come together with us. It has been hard to keep up the work because we dropped everything when everything closed down and when we decided to start taking up things again, I don't think he felt as included as he might have wanted to. I mean we tried, but it was different. So he decided that for him personally it was time to move on. We respect that and wish him the best.

Well, I think it's quite a pity because I really liked his performance when I saw you once together with Sigh in Essen in 2016, I think.

Yes, he did an amazing job and I'm very happy to have done it with him and got to know him because he writes so much music and he performs really well. And he had a good connection with the new and the old fans of In The Woods...

At the moment you are recording a new album. How far did you already come with it?

Before James decided to leave, we had eight songs which were completely finished, with guitar, drums and bass already recorded. He took three of these songs with him, so we have five left and we are going to start tomorrow to record three new songs that we have written. So, we record those and start working on more detailed work on the other songs, record vocals, mix master and see what happens.

Are there some titles / the album title you maybe can reveal?

We had one but that was James' idea (laughs) so you see you can't really go with that, you know? We have a few working titles, but nothing decided. We just had announced the new singer and are working on the music, and we will sit down and find a fitting name.

What do you think will be the circa release date of it?

We hope it'll be in September. If everything goes up to plan, we have some live stuff going on at the end of this year and it will be good to have it out and promote it (laughs).

Will you also come to Germany?

Yes, definitely. We have always come to Germany. It's Munich, Berlin, Hamburg, I think these are the three locations on my last updated list. But let's see what happens.

Is the music a continuation of the previous two albums or do you change many things in the sound?

Before James quit, we knew we were going for the heavier parts of Cease The Day and he had a certain way of adding his keyboards and working with his voice. I think the sound is going to be a little bit different. You will recognize it I hope. We will have the same guy mixing it, that's what we're hoping for and we'll have a hired hand to record some keyboards for us. Our new singer has an extreme talent for harmonizing and melodies and it's still gonna be heavy and you will recognize it in the guitars and all.

But it won't be such a change like from "HEart Of The Ages" to "Omnio", will it?

No, it won't be as big a change as that (laughs). We will keep it like we did on Cease The Day. I don't want to go out and say that it's a follow-up but with the music written you can certainly hear elements from this band and what we were doing on Cease The Day and what we've been doing live.

What will the lyrics be about?

To be honest, I haven't read them all. Our writer is a very happy-go-lucky guy and I think one of his working-titles is 'We Sinful Converge'. I don't know what is going to happen with that, but it will not be as with James. He wrote about things that pissed him off. I don't know how Bernt will write, I mean I can see him pissed off, but it will be about things he cares about.

After all the line-up changes, Anders is the only one who is still remaining of the old ITW line-up. Would you say that the band still has the spirit it once had in the 90s?

I had an immense long conversation with Anders about how it is when I joined, and the band had a certain individual spot. You never gonna find anyone to fit that spot but when we did that tour back in 2016, things were extremely rushed because we had Christian and Christoffer Botteri with us and I hate to say and they hadn't played the songs for twenty-five years maybe and so it was all kind of half-ass. When we've been touring in 2019, we kept a lot of those arrangements and these last couple of years we've all been going very deeply into listening to the details that make those songs so good. We are never gonna copy what they did but we try to keep that spirit but it's more modern and the things sound better these days and we try to keep what made the band out. They made three records that are totally different but if you take that live album Live At The Caledonien Hall, we have used that as an example of how we want to sound as a starting point. We work on it and our main focus on the old stuff is HEart Of The Ages. The way we play is sometimes very authentic but as musicians you like to put your own feeling in it as we are a new band with new members and the changes that come naturally with that.

Besides ITW, all of you have some side-projects. How important are these bands to you?

When In The Woods… completely stopped in 2020, I started writing a lot of my own ideas and spent a lot of time doing that when we did nothing with In The Woods… and released my own record. That has kept me inspired to work harder with In The Woods…, to make this upcoming album become good and it's the same thing for Nils (Drivdal ;M.) our bass player who recorded a lot and playing in two or three other bands. But we all were true to that that In The Woods… was priority number one to us and will be for everyone.

You released as "Kas" a very fine black metal album in December called "The Problem Of Evil" which sometimes reminds me of old ITW. What was the intention behind it?

Well, all musicians have a dream to record an album for yourself – a project where you can do whatever you want. No one is going to talk against you or stuff like that (laughs). That was the main thing – I wanted to do something completely on my own and a lot of the music sounds a lot inspired by early In The Woods…, Green Carnation and those bands because those bands are what made me learn how to play when I started to play black metal. The harmonies and all that type of things. By playing all these old songs you get inspiration (laughs).

Besides, what does the name "Kas" mean?

Haha, it means nothing! It's just the initials of my name.

Oh, alright, haha! I looked up at Google translator and it told me it would mean something in Estonian. Well, that's simple! Where can one purchase the album? Is it only on Bandcamp and Spotify?

I've been doing all this independently. You can buy the album on Bandcamp or directly from me. I have no label, nothing, so I am just doing this by myself. You can also buy it on ITunes or stream it on Spotify and all those streaming services.

Talking about music in general, what are your major inspirations apart from In The Woods… and which were the last remarkable albums you bought?

Hm, I love this question (laughs). One of the biggest influences on me in the last three or four years has been Agalloch. I like that depressive sounding, rather simple and the way they play that stuff I find it pretty cool. Of course, there are some of the Norwegian black metal bands; you never get away from them but it's something I don't listen to a lot. There is this band from Finland which is called Mustan Kuun Lapset from which we did a cover version with some friends. I did the mixing session and all and the album they released in 2007 – the one with the pink cover ("Viimeinen Laulu Kuolemasta"; M.) – is such a good album. Unfortunately, I cannot understand a word. But my influences go way back to Rory Gallagher and Uriah Heep until 75. That's probably the reason why I play music. The last album I bought was from Italian band Shores Of Null. We toured with them in 2019 and I got this one sent up from Italy. It's a brilliant one.

Thanks for the interview! Stay safe!

Thanks for talking to me! Stay safe!