Deranged, since they first landed on the death/grind scene over a decade ago, has been pushing ahead strong. They've got a number of full-length releases under their belt, the most recent being 2002's "Plainfield Cemetery." Unfortunately, Deranged hasn't quite made as big of waves inside the death metal scene as other acts, mostly due to the fact that they're a bit too uncompromising for some people to handle. However, those that can handle something as chaotic and intense as Deranged and their latest album "Plainfield Cemetery" know what these guys have to offer. Here to talk about what's going on with Deranged since we last heard from them in 2002 is drummer Rikard Wermén.

I know your last album "Plainfield Cemetery," was released in 2002, but I think you guys did an excellent job on it! This interview is quite awhile after the release but it never hurts to keep the Deranged name in the spotlight.

To start, could you tell us a bit about Deranged and the history of the band?

Basically we were just a couple of bored friends that got together and formed a band, as we hadn't anything better to do. All in all, we released five full length CD's, plus a couple of mini CD's and the like. We have been around since '91 or '92.

"Plainfield Cemetery" is your fifth full-length release. How far do you think the band has come since your debut "Rated-X"?

We're still pretty much doing the same thing. That is, we're still playing what most people would label as, which is brutal death metal. Hell, we recorded "Rated-X" almost 10 years ago now. The fucking time just flies by. Incredible! "Plainfield Cemetery" is so much tighter and all in all a so much better release, you know?

In your opinion, what makes "Plainfield Cemetery" a better album than your last effort, "Deranged"?

Better songs I would say. The lyric arrangements and vocal patterns are so much better also, as well as just better lyrics overall. All though I'm the drummer, I have been pretty much doing all of the lyrics and the lyric arrangements since "High On Blood." I put down so much time and work on that for the "Plainfield Cemetery." A good friend of mine from New Zealand, Kevin Marshall, helped us a lot with the lyrics for the "Plainfield Cemetry," so more or less, for the first time ever on a Deranged recording, the lyrics are decent as well. [Laughs] 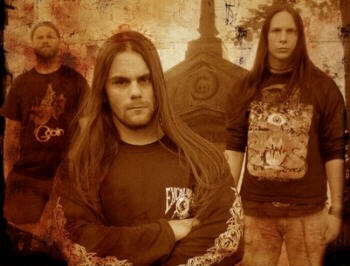 Now that some time has passed since your last album, has the band made any plans yet for what's in store in the future?

I don't know when we'll record a new disc or whatever. I guess we'll just try to do some more touring and try to record a new CD during winter but nothing is 100%.

Listenable Records have been the bands home for longer than any other label. How has this been working out?

Great! They have been really supportive and Listenable are one of the few labels I have been in touch with that more or less always give me a straight yes or no answer and I appreciate that. I hate when people can't give you a straight answer. We have been with them since '99 or so and we have a few more CD's to do for them.

Certainly Deranged is a very heavy band. What inspires such an intense and bludgeoning approach to metal?

Broken toys during childhood. [Laughs] I don't know man. Everything you'll hear and see as well for that matter.

Despite the loud and busy approach, Deranged is a relatively tight band that keeps the sound pretty clear and understandable. Is this a product of practicing or what?

How about in the live setting? How does the music come out then?

As with any other band, sometimes we're great and sometimes we suck like hell, [laughs]. We're just humans, man. Usually it turns out at least okay. I mean, we can go of the stage with an insane and screaming crowd and being pretty much in a bad mood as we fucked the set up.

How was your most recent tour with Vader and Arkhon Infaustus? Were the bands on the bill good to tour with?

To be honest, the tour was a nightmare. Not because of the bands. Vader, Arkhon Infaustus, and Arise, as well as the crew, were all cool as hell, but we were unlucky to get a driver that was completely mad. Most of the shows were cool though. 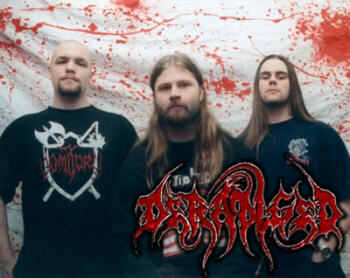 As a band, when writing music what is the goal, or what is it that you're trying to achieve?

Just basically try to please ourselves. I mean, we like to play music, therefore we're in a band, you know?

Lyrically, what concepts have you covered in the past, and what has been covered on "Plainfield Cemetery"?

What do you think the greatest beneficial change in Deranged has been over the years?

Hmm... we've had so many changes in the line up and they have always been for the better, so that's cool.

Have there been any changes that have been for the worse?

Yeah, I don't know. It's all in the past and I don't want to talk shit about anyone.

Well, thank you for your time. Any final comments you'd like to make?

Thanks to you for the interview. Be sure to check the Killaman CD, out now!