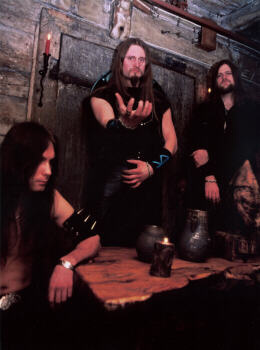 Norway's Enslaved, since releasing their first material on the split EP "Hordanes Land" with the now infamous Emperor, has been destined for great things.
Unfortunately, a band as talented and cutting-edge as Enslaved hasn't quite been able to break the ice as far as gaining the recognition that acts such as Emperor have, when surely they deserve it. However, Ivar Bjornson and Grutle Kjellson, the two original and founding members of Enslaved, are still doing what they love, and that's creating music.

This year, Enslaved dropped "Below The Lights" on us, the follow-up to 2001's excellent "Monumension." With a more than staggering response towards their seventh album, Enslaved is that much closer to making their presence more widely known.
This time around, Enslaved decided to take a break from what has been the trend for their last two albums, doing a concept and tying everything tightly together.
"This time there is not the direct link between the lyrics, as there is no real complete concept for the album. It is more a collection of more or less abstract and open lyrics: dreamscapes, visions, thoughts, mythology and mysticism. So, we were looking for the red line to bind it together; hence the title and the cover. Truls Espedal (Artist for "Below The Lights" cover) has a supernatural empathy for what we are trying to express, and we provided him with the title and some insight into the different songs, he simply went into his studios and returned with the front cover," says Ivar. 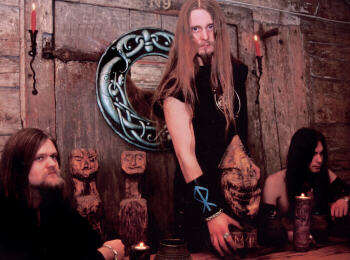 Neglecting to embrace the idea of a concept album once again doesn't make "Below The Lights" any less of a complete work. Whether or not "Below The Lights" is a superior album to its predecessors is a question that only the listener can subjectively answer, but according to Ivar there are a number of reasons that, to him, make it a stronger piece of work. "I would emphasize direction, better production and better songs. It is simply the most energy filled album we've done up to date," says Ivar. "I also think we were very critical towards our own performances during this recording. The whole process of revising the line-up for the sake of the album and the band, which carried a lot of grief and emotions with it, made us more open to criticize and encourage each other. We all had a lot of input on each other's work.
"Whether it is superior to "Monumension" is not for me to say. They are very different albums, but as a songwriter, lyricist, co-producer and metal fan, I am going for "Below the Lights."

The recording process for "Below The Lights" did have its fair share of struggles. More than one would expect, as a matter of fact. Not only did Enslaved part ways with their drummer, Dirge Rep, who played with Enslaved from 1998's "Blodhemn" all the way throughout "Below The Lights," but the band also lost longstanding guitar R. Kronheim, who had been a part of the bands line-up since Dirge Rep joined and left after "Monumension." These losses, however, failed to hold the Enslaved collective back from success, and may have been for the better.
"I think Roy added a chaotic element to our songwriting process, which is a positive thing, in all aspects. However, everything has a "limit," and we felt that we had reached maximum entropy after finishing "Monumension." We felt a need to focus the musical energy, to channel it all through a narrower gate, so to speak. With Kronheim wanting to take the band into a stoner-like direction, add some personal issues, it became evident that Enslaved had to make "Below the Lights" without Kronheim. I think the density and focus of "Below the Lights" proves this to be a right decision," says Ivar. 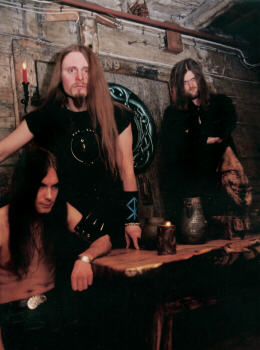 As of now, Enslaved has made use of another guitarist, Arve Isdal, and a new drummer, Freddy B, who after working with Enslaved for a half a year or so, joined the band as a full time member after his band at the time, Re-actor, faced line-up trouble.
"This is for us the best drummer we've had playing with us. Of course, all of Trym, Harald and Dirge have been excellent drummers for the work they have been playing, but C2 (Freddy B.) fits the new material, as well as almost all the old stuff, perfectly," says Ivar.
As for Enslaved's earliest drummer, Trym Torson, who is best known for his work Emperor, we won't be seeing him rejoining the Enslaved fold anytime soon.
"We socialize on occasions, like gigs and stuff, but we are not in regular contact or anything. You know, he moved to the other side of the country and began a totally new life. I am pretty sure he will never play with us again, but it was amazing while it lasted. I regard him as a friend and admire all his post-Enslaved work, but differences that made us part ways are too big to make it plausible to see him drum for us again," says Ivar.

Through the years, dealing with numerous line-up changes, it's a wonder that Enslaved has been able to keep things so strong. For Ivar, the determination and will power to keep Enslaved a living entity is tied directly into his life, including his beliefs.
"[My beliefs] play a very major role in the music. The music is directly derived from our lives and experiences, our dreams and thoughts. So the beliefs, or maybe even philosophies, which is a bit pretentious, I admit, are the cornerstones of the music, I guess," says Ivar.
This has been an aspect of Enslaved's music since the beginning of their existence. Another aspect that has followed Enslaved, to one degree or another since the beginning, is Viking mythology.
"The runes; the mythology and mysticism of the Viking Era is alpha and omega/ fehu and dagaz for Enslaved, and has always been that," says Ivar. "We have developed a more micro-cosmologic approach to it over the years, but the core is still the same. It is as if we are more interested in describing the atmosphere of the experience, rather than accounting for the actions that make up the experience." 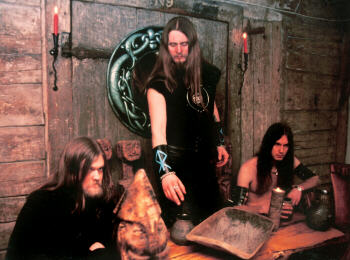 Such elements of Enslaved that have been there from the beginning will never die, and will always hold their place in the hearts and minds of the band.
"Progression or evolution is best served if it does not include dismissing either the past elements or the future possibilities. Being all about regression makes music rotten from the inside in the long run, while total futurism tears up roots and make the tree fall," says Ivar. "What am I, some old wise guy talking at the bonfire under the stars? Somebody stop me."
One might wonder what on earth is the purpose of all of this. Who in their right mind dedicates most of their life to such a time consuming project?
"I have developed an urge to "express myself" though music," says Ivar. "Over the years I have grown more and more hungry for making music that can alter my own state of mind. Being introduced to the old black metal bands on one hand, and 70's prog and psychedelia like Hawkwind and Yes on the other, was the perfect combination on how to make energetic dark music that could evoke extraordinary sensory experience for me. And it seems to be working for others too, so it is all good."

So, other than the fact that Enslaved isn't quite gaining the recognition that they deserve, all is right in the Enslaved realm. To Ivar, Enslaved is as healthy as ever.
"Every decision, positive or negative, every sacrifice, downer, upper or still moment makes me a little more convinced that starting this band with Grutle will be my greatest achievement as a humanoid."