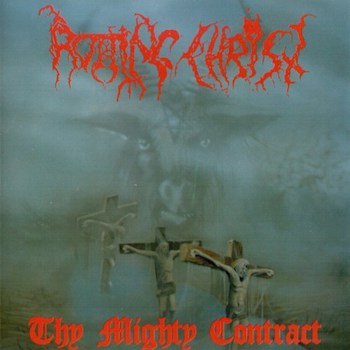 My mother, Nancy Booth Nilsson (may she rest in peace) was one of the finest art historians the world has ever seen. And as such, she had a particular love/fascination/HUGE knowledge base when it came to the art and culture of Greece, Italy and the rest of the Mediterranean region. And it ALWAYS fascinated her that an area of such warmth and romanticism could also be a breeding ground for some of the finest black metal the world has ever seen.

It really is remarkable. One listen to a song by any of the original Greek masters, and there is little to no doubt as to its origin. The unique sound and fiercely original vision is matched only by the intense camaraderie between the musicians. Especially in the early days, it seemed like everyone was playing on everyone else's albums (which I suppose fits in more with the classic Greek stereotype my mom was talking about).

So we are looking at three debut albums by three founding fathers of Hellenistic black metal (all of which are viewed by many fans as the bands' best records, respectively). We are starting with the undisputed kings. The ones who remain fearless in their musical explorations, AND also happen to be headlining this year's Devastation on the Nation tour (STOKED)...

ROTTING CHRIST showed a steady progression in sound and vision from their 1989 demo, Satanas Tedeum, to their 1991 EP, Passage to Arcturo... but I don't think the metal world knew what hit them in 1993 when their first full-length, Thy Mighty Contract, rose from the depths. I would say 99% of the band's fans cite this, or one of the two albums that followed, as their favorite. For the majority, it is this one. Colleagues like Darkthrone's Fenriz, Immortal's Abbath and Vader's Piotr Wiwczarek have discussed how important this album was to them. It really was the perfect mix. The rawness from the demo days was still there, but the compositions were getting more intricate, and more unique. They had somehow found a way to bring melodies and progressive riffs to the foreground, but still create a mysterious, strange and scary atmosphere. Just slightly "left of center," musically and lyrically... in the most brilliant way possible. Starting with Thy Mighty Contract, ROTTING CHRIST became what remains to this day to be one of the most recognizable and inimitable bands in extreme metal. 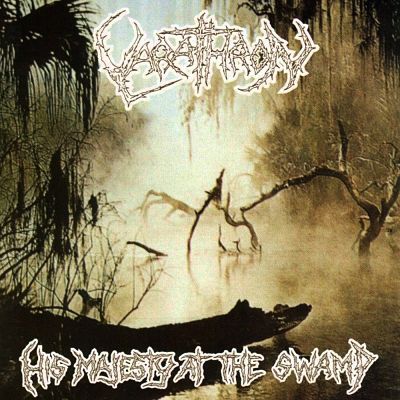 VARATHRON's debut full-length, on the other hand, is absolutely pristine. You would never guess it was the band's first "official" foray into the world of recorded music. In addition to an almost regal-sounding production, His Majesty at the Swamp (1993) shows VARATHRON to be exercising an amazing amount of poise and restraint. Although it has moments when the drums start a-blasting and the evil rears its head out of the blackened sea... the album is largely mid-(and occasionally slowly) paced. But VARATHRON knows what they are doing, and how to best unleash their magicks. The riffs are slowed down and deliberate enough that you can get lost in them. The songs are epic, carefully structured, with perfectly-placed melodies, so that each piece feels like a soundtrack to an entire universe.

Mock if you will. I know I'm right. And fans of the band know EXACTLY what I'm talking about.

NOTE: In addition to a bonus track recorded in 1992, the Floga Records cassette reissue also includes a live version of Nightly Kingdoms recorded 22 years later (which is still 5 years ago...gross) in Greece. It's a powerful and satisfying example of VARATHRON's staying power. It's darker, definitely harder-hitting, and eternal... 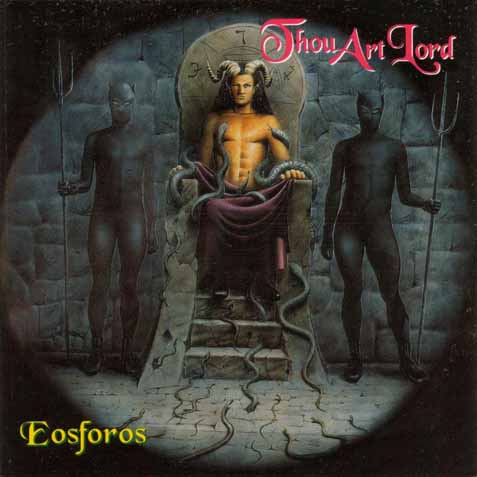 We conclude today's visit to the Aegean landscape with the debut album from THOU ART LORD, titled Eosforos (1994). I feel like I was one of the many fans in the 1990s who first discovered them because of Rotting Christ's Sakis Tolis and his involvement with the band. (The first TAL album I bought was their second, Apollyon, which came a couple years later.) But yeah, this is smack in the middle of the first golden age of Hellenic extremity. It was unleashed in between RC's Thy Mighty Contract and Non Serviam, and just on the heels of Necromantia's Scarlet Evil Witching Black and Varathron's His Majesty at the Swamp.

How to distinguish Eosforos from the work of THOU ART LORD's contemporaries of the time? Well... it has that raw, echoing Rotting Christ bleakness, but without their experimenting with trickly, twin-guitar harmonies. They instead opt for a straight-ahead, rhythmic onslaught. And Varathron? Well, they do sound quite similar at this point in time. But again, their no-nonsense approach is not possessed of the musical layering, occasional subtlety, and contemplative moments that Varathron was toying with.

NOTE: Sakis Tolis recently said in an interview that THOU ART LORD is not planning on recording any more music. This makes me sad. I'm weeping black demon goat tears straight onto an obsidian wasteland. Obsidian, I tell you.

Thanks for your attention. See you soon.