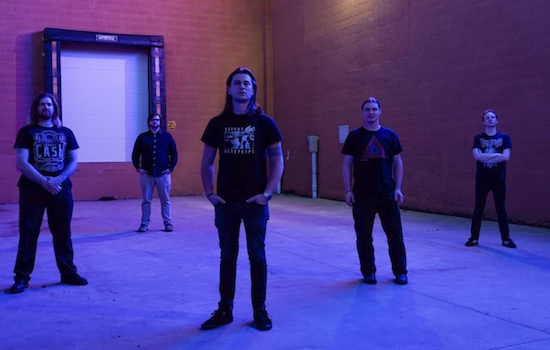 When almost a month ago, New Jersey hellions ANTICOSM have announced the upcoming release of their third full-length album, The Call of the Void, with the stream of the first single 'Scorched Earth', I knew it right away that I have to get in touch with the band, and set something up on MetalBite pages to give our readers more in depth look into their upcoming record. Mark Siedlecki was kind enough to answer all my emails and nagging messages and as a result, today we are proud to present the premiere of their second single for 'Somewhere Between Life and Death' in a form of the lyrics video. But to give you a little extra on top of their razor-edged brand of black and thrash, I followed up with few questions to dive a little deeper into ANTICOSM DNA. So, hit play and read on why I believe this will be their breakout record.

It goes without saying that your latest record is your best work to date. Every aspect was taken to the next level, songwriting, production and even graphics... it almost feels like with this record you took Anticosm from a hobby to the professional entity. Was it planned and who/what initiated all those changes?

Beheader: We agreed as a band not to suck so badly.

Kirill: There have been a few lineup changes since our previous album, so we wanted a new beginning in a way. We designed a new logo for the band and then we all came to an agreement not to settle on anything while creating The Call of the Void. Songwriting was more collaborative since we pre recorded everything and shared with each other before going into the studio. It was a new way of working for us, the right way, we learned a lot and plan on the same strategy for the next release.

Since we're premiering 'Somewhere Between Life and Death' tell us what makes this track stand above the rest to represent the new record?

Kirill: With this album we wanted to ditch all our older ideas and create something new. 'Somewhere Between Life and Death' is one of the two songs on the album that contains riffs we wrote years back. It's completely overhauled of course.

Mark: Personally I think it's a strong track that someone can bang their head to.

Musically the record flows freely even-though you mix thrash, black, heavy and even some punk and rock within almost every track. Do you ever restrict any ideas from going 'overboard' or anything goes in Anticosm?

Beheader: We write whatever we want.

Mark: I tried really hard to stay focused on this album and make sure everything got to the point a little better than previously. I guess trying to cut out the filler if you will. But we don't restrict ourselves in the sense that, if something sounds good to us and we like it, we will use it.

Kirill: The most common critique we used to receive for our previous works is that we "lack direction" or are "all over the place", now its we're "diverse". Funny what good production could do. Or maybe we actually started to figure out how to combine all these elements in a solid way. Who knows?

Is creative process a combination of many inputs from all members or vision of one person? Tell me how your typical song takes final shape?

Mark: I write a lot of the riffs, mostly, and all the leads. Kirill writes some riffs and Beheader actually wrote an entire song on here as well and he comes up with all the drums to the riffs, but not any one person "writes all the music". Everything is always changing and up for suggestion, riffs morph, timings change. The way Beheader writes the drums to something will change how I decide to accent a riff. We all arrange everything together mostly, with only a few exceptions where the song presented to the band didn't change much, and even still things change, get added or removed etc. Kirill does write all the lyrics, and that contributed to how I wrote leads for the album, and sometimes the riff inspires how Kirill will do vocals as well. This was the first time I ever wrote leads to the vocals, which I think really made some sections of songs stand out, and I plan on doing that again in the future. At the end of the day the four of us worked together on everything in detail to try and create the best possible album from start to finish, we won't keep anything in a song if one member doesn't like it for example, and just try and make something we all agree sounds good.

Beheader: It is pseudo democratic, we all contribute.

Some bands work for months in preproduction and some write new music and/or improvise in the record studio. How was it with "The Call of the Void"?

Kirill: We recorded everything except vocals before going into the studio, for the next record we expect to spend even more time on pre-production. We've learned a lot in the creation of the album which will help us streamline the process for the next.

Mark: Yes we did a ton of pre-production, writing and re-writing parts, trashed a couple songs entirely, trashed some songs and only saved a riff. The vocals were written pretty much during studio time and some of my leads were written during that time because I wanted to try to write them more around the vocals.

There are some serious guitar licks on this record. Who or what record made you pick up the guitar and who was your biggest inspiration as a guitar player?

Mark: Ace Frehley was the first time I saw a guitar player and said "I gotta do that!" I was maybe 7 at the time, so KISS was a huge influence on me as a child. My father always listened to old punk and metal. Metallica and Venom, Motorhead was his favorite band, and in turn, became one of my favorite bands. As far as my playing influence goes a lot of times I think "What would Andre Olbrich (Blind Guardian) do?" I always loved how his solos are like a little song within the song.

As a band, do you ever go back to your early demo days and talk about your beginnings? How do you view your early work today?

Kirill: It's interesting to look back at the early works and see how we evolved as musicians as well as our vision for the band.

Mark: I actually still enjoy the first demo, it's cool to listen to us as kids and see how our sound matured over the years. The core sound of Anticosm has always been Kirill on vocals, Beheader on drums, and myself on guitar, and I think you can still hear that thread running through from Alcoholic Darkness all the way to The Call Of The Void. I think we just honed it in more.

Since I can't find much on the internet regarding your beginnings I might ask questions you hoped to never hear again but here they are: Is band name (Anticosm) related in any way to anti-cosmic philosophy and if so do you still explore the subject in your lyrics or on personal level?

Beheader: Anticosm is a contraction of against the cosmos. Philosophically I have no idea what that means.

Kirill: When we came up with the name we were not influenced by any theology or philosophy, we wanted something that just meant anti everything. The Call of the Void is in a way a concept album exploring ideas of neutrality, duality, and the Void. Religion, politics, social status, vanity, death etc.

Are you satisfied with where Anticosm is today? Is there anything that knowing now you'd change if you did it all over again?

Beheader: I'm never satisfied with Anticosm, thats how I motivate myself to improve my playing.

Kirill: No and no, gotta move forward, on to the next.

Mark: I think any creative person always thinks they can improve and do it better. It's what drives us to keep trying.

"The Call of the Void" will be out on your own Hell Kill Destroy Records. Did you start your own label for Anticosm alone or do you plan releasing other local bands? Do you plan on releasing vinyl format?

Kirill: We started it for Anticosm and The Call of the Void. We are not planning on going any further with it... at least not yet. We are planning on pressing vinyl. Right now our priority is the next album.

Is Anticosm hitting the road to promote the new record?

Mark: We have 2 upcoming shows currently and are looking to book some more. No tour planned at this time but I wouldn't rule that out.

Thanks for taking the time to interview us and premier our new song. The new album is out everywhere August 16th, hope everyone digs it! Cheers!