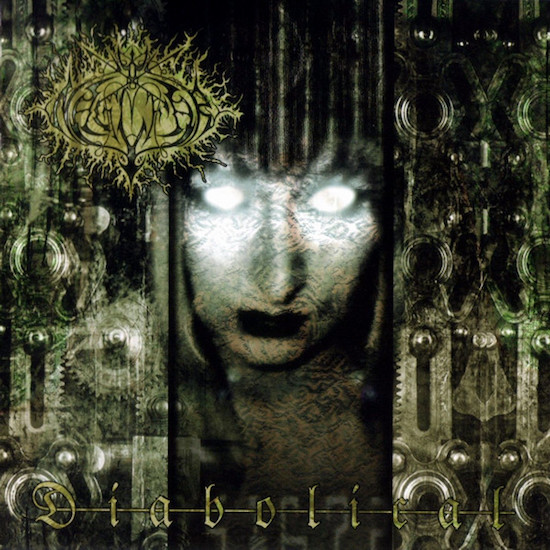 Sorry about the extreme delay in this entry. In the disease-ridden landscape of today, many other things have taken precedence. I'm sure you can all understand. (One thing about hours currently being cut way back at my job has made it so I now have a tad bit more free time.)

I think, at this point, we all need a little bit of hope. And today's BMR example of how hope will be rewarded is by discussing three second releases from three artists whose debut albums were thought impossible to top by fans around the world...but all three of these sophomore efforts (I believe) ended up doing just that.

(I realize that was a horrible segue...but it's the best I can muster up at the moment.)

We will begin with Sweden's NAGLFAR (the band took their name from the nails-of-the-dead boat to be used during Ragnarok), whose debut album, "Vittra", took the underground by storm in 1995. (We're also starting with them, because they have a new album out soon, their first in 8 years, and I am STOKED.)

After the almost ethereal, trickling-esque black metal stylings of their debut, the band really found focus and developed true fury on "Diabolical" (1998). This is also (naturally) where comparing the band to Dissection really started to take off in the metal press. And while the similarities are certainly there, NAGLFAR is definitely its own, haunting, ravenous, occult-worhipping beast. This record is absolutely pummeling. The melodies and chords are still seductive and memorable, but never at the expense of the album's ferocity. And what little keyboard use the band deploys is used to maximum effect. Less is more, indeed. DAMN these guys are good.

NOTE: The album starts with the sound of an alarm siren going off before blasting into 'Horncrowned Majesty'. It's actually kind of perfect. It's like the band's warning to any and all listeners, telling them to wake the fuck up and get out of the way unless they feel like getting steamrolled by the next 45 minutes. (Most, if not all, of you readers would happily choose the latter.)

MAJORITY NOTE: A lot of NAGLFAR's fans have a lot of different favorites, but I find that (especially among the ancient ones), this is the one most people land on. 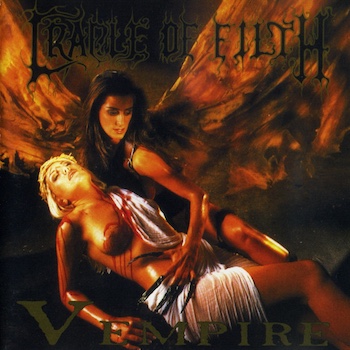 And then we move to the UK's CRADLE OF FILTH. I first got a copy of their debut, "The Principle of Evil Made Flesh", not long after it came out in 1994. With its high-melodrama, trend-setting-to-this-day gothic/vampyric aesthetic, and Hammer-Horror-with-a-metal-soundtrack keyboard usage, this album was a true game-changer. How could they possibly top this?

I remember thinking that "Principle..." was an absolute masterpiece for the first two years I owned it. And while I still believe it to be wonderful, I also believe it pales (like moonlit, undead flesh) in comparison to what the band unleashed next. "The Vempire or Dark Faerytales in Phallustein" EP (1996) was one of the most anticipated releases of the year amongst extreme metal fans (myself included), but nothing could have prepared me for the absolute, terrifying, beautiful perfection of these six songs, in these 36 minutes. I know that Cradle fans generally consider the full-length follow-up (released barely six months later) to be their definitive work. I disagree. This is not only Cradle's best effort... "Vempire..." is one of the greatest metal records ever made. It's one of those listening experiences where the first impression was so strong that you can remember exactly where you were sitting the first time you heard it, and exactly how you felt.

I could write a book about the ways in which this CD rules. I suppose the shortest version would be: Everything one could hope for (in terms of improving on an already-amazing debut album) is here: they tightened up the songwriting, while still allowing for epic compositions when called for. Despite its apocalyptic all-encompassingness, it feels nice and lean. The production is PERFECT. It's like they took the cork off the whupass bottle in comparison to the previous album. It's got the incredible gothic layering, but with this bludgeoning, Scott Burns-like death metal production. The keyboards (both as ambiance and virtuosic soloing) can be heard perfectly, as can Nick Barker's amazingly intricate drumming. One of the most potentially annoying elements in the black metal firmament, female vocals, never has been and NEVER will be as perfectly and atmospherically applied as they are here. And the dense, Freddie Mercury-esque layers of Dani Filth's wall of vocal death have never been scarier.

I will conclude by noting that the opening one-two punch of 'Ebony Dressed for Sunset/The Forest Whispers My Name' is right up there with the most legendary metal song segues. I would even go so far as to say that it equals Slayer's 'Post Mortem/Raining Blood' for epic badassery and terror.

NOTE: When I interviewed Dani Filth in 1997, he told me something that makes "Vempire..." even more remarkable: It was basically written and recorded in this huge hurry, because the band hated their record label and wanted out of their contract but still owed the label one more release. Funny how anger, deadlines, and desire can contribute to great art...

MAJORITY NOTE: I still find that most Cradle fans cite the aforementioned follow-up album, "Dusk and Her Embrace" (1997), to be the band's crowning moment. Much respect to that (it IS amazing). Although I am consistently surprised at how many "fans" of the group haven't heard "Vempire..." 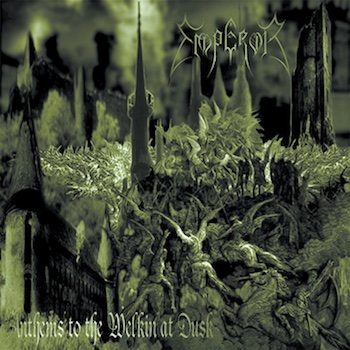 We conclude with a band that released a debut full-length that was so perfect that people thought it was scientifically impossible to top. EMPEROR's "In the Nightside Eclipse" (1994), more so than any other single entry in the genre, is repeatedly cited (to this day, by many) as the greatest black metal album of all time. How in the world could it ever be bettered?

And then, three years later, they fucking did it.

"Anthems to the Welkin at Dusk" (1997) is one of the great albums of all time, in ANY genre. From the first mysterious guitar lines at the record's beginning to the last fadeout of 'The Wanderer', it is a goosebump-inducing work of art, start to finish. To listen to the album in its entirety is a religious experience.

While I DO think "In the Nightside Eclipse" is amazing, and its impact and classic status undeniable... musically, I'd have to say "Anthems..." is superior. The fact that one of the most anticipated metal albums of the decade not only met the doubtful hopes of those who thought approaching the perfection of their debut album was unrealistic, but also exceeded them in many ways... is a huge accomplishment all by itself. (Try to imagine a Raiders of the Lost Ark sequel that was actually better than Raiders of the Lost Ark, and you get the idea.)

Again, this is one of those records that would take a full dissertation to fully detail why it is so amazing. In short, there is just MORE quality on every level. The music had progressed well beyond the ambient-keyboards-carrying-and reinforcing-the-melody standard that the first album did so well. Every note (no matter how instantaneous or drawn out) is perfectly placed. The fast parts are faster. Ihsahn showed off his talent for actual singing (in addition to still producing the most inhuman-sounding screams in the history of music), especially on the track 'Thus Spake the Nightspirit'. (The fact that he could also pull this off live, and stay perfectly on key, is extraordinary.) The intro ('Al Svartr - The Oath') into the first song ('Ye Entrancemperium') is one of the great beginnings to any album I've ever heard. From quiet mystery, through majestic build, all the way to one of the most world-destroying shredfests ever.

The list goes on and on. Anyway, EMPEROR proved with this second album that they were truly untouchable on just about every level. They were so far beyond what everyone else was doing that they almost existed in another universe.

This is, in MY humble opinion, the greatest black metal album of all time.

MAJORITY NOTE: It is exceedingly hard to tell, at this point, which of the two records gets more praise from fans. If I HAD to choose, I guess it would be "In the Nightside Eclipse", but over the past decade, more and more people I've spoken with share my humble opinion.

Thanks much for your attention during this crazy time. I know a lot of us are feeling helpless right now. Just please take care of yourselves, your friends and loved ones. Stay positive. Stay fucking smart. And we will get through this. And in the meantime, there is an infinite amount of music out there to keep you company.