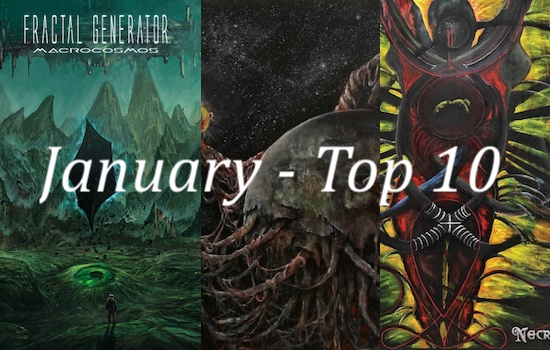 Thanks to more time afforded by being in a lockdown here in Ontario and a relatively short stream of promos being released in January I was actually able to keep on top of new music that came out in the first month of 2021, for the most part. It was surprising how many albums I was going to include on this list ended up actually being released in February - first month of the year's not a popular time to release an album, I suppose. Either way, that just makes for a more manageable list of stuff to go through, which is fine by me! Welcome to this year's first edition of Nate's top 10.

One-woman black/death metal from Iceland that deals with anti-misogyny/racism/homophobia topics. It's a well in metal that's relatively unexplored even though there's still a lot of ground to cover. That alone makes me want to give this some extra attention, but it's not like I can understand what the vocals are saying anyways - the music is what will bring me back for another go, and that is what I'm here to recommend. The guitars invoke seething frustration, with occasional dual-guitar harmonies that sound ever-so-slightly out of tune that creates this unusually melodic rage. The genre tag for this seems to be "brutal death metal", but the pained, triumphant tremolo and steady blasting the drums points to a black metal influence for me. The drums appear to be programmed, but it's done with enough taste and realism to properly fill the music out, and the guitar and incredibly ferocious, feral vocals will do more than enough to keep your interest piqued. 7.9/10

I don't really feel the "cold" theme in the music (neat gimmick though), but my god that vocalist is a dead ringer for Karl Willetts, especially during the slow parts, and the pacing of these songs has a great stop-and-go effect. I could see the band leaning into that further on future albums to give themselves a more distinct identity. Anyways, fact of the matter is Century Media also put out the new Asphyx this month, and I ended up having to choose between that and Crypt of Ice for a spot on this list. Frozen Soul won out for their youthful songwriting zeal and their ability to make the slow parts much more engaging than the Dutch death/doom veterans did. Fact of the matter is, even a second-rate Bolt Thrower clone is like a first-rate anything else. 8/10

Cryptic Brood is a more recent discovery of mine. I very much enjoyed Outcome of Obnoxious Science and its warped, chaotic approach to rhythm and progression. Working tempo slow-down and speed-ups into a song and having it not sound like a mess is a hard thing to pull off, and Cryptic Brood use it as a songwriting staple. Their side of the split is more of what I've come to expect from them, with flurries of prickly OSDM grooves morphing into sickly, patchwork creaks and moans that slow to a crawl before mutating into something else before the song's end. Night Hag, on the other hand, lays down some disgusting, filth-caked death-doom of the Coffins variety, and their more simplistic bludgeoning is something that rounds out the latter half of the split really nicely after the first half twists you into a pretzel. I'm not usually a big split guy because I find them to be uneven (one band is way better than the other), but with this split the bands are similar enough in style that they mesh well, and each band's strengths help to minimize their respective weaknesses. 8/10

7 - Werewolves - What a Time to Be Alive

I reviewed Werewolves' debut album and while I liked the album overall, I did find myself wishing for a little bit more meat-headed savagery. It appears they had the same idea that I did, because What A Time To Be Alive cranks the intensity up, the intelligence down, and instills a sense of blind rage that makes you completely forget that this band is made up of seasoned, professional, respected musicians. This is starting to get really fun now, and it's only just beginning, with several more albums written and ready to be unleashed on the public when the time is right. 8.1/10

If the new Undeath album got your blood pumping last year, this will keep the obsession going. Big, lumbering guitars with an oldschool tinge, mashed together in a haphazard Autopsy-esque way while still keeping some consistency to individual songs. I'll always give points to bands that can successfully execute a gimmick, and the prehistoric theme that Dipygus has going on fits perfectly with the feral, unhinged structures and slack-jawed brute force of the riffs. Everything else about the band seems carefully tailored to commit to the bit, with their Facebook page looking like some Bigfoot conspiracy theorist's collage from the 70s, and the lyrics dotted with obscure samples and historical references to mysterious creatures. The strange, snakey way in which it's written makes it a very uncatchy album - it's more like a swirling mass of paleolithic filth. 8.1/10

This is what would happen if the guys from Nile did a bunch of unidentified drugs and read Illuminati articles on the deep web for a month or two. The hyperspeed drumming has a weirdly hypnotic feel to it, and the slower sections that would kill the momentum of a Nile song are used to delve into these entrancing, ritualistic segments that add power and atmosphere to the faster parts. It's technical death metal would seem completely ridiculous if it wasn't so serious and meditative, like a street preacher shouting cryptic messages of impending apocalypse to anyone within earshot, seemingly uncaring if anyone is even listening. Everything about this seems like it was the product of some bizarre joke conceived during a band practice, just with a scary amount of time and effort put into it. 8.3/10

Finnish black metal is a tried and true style at this point, and much to my chagrin there is now yet another band who uses the exact same riff ideas that I now have to give my money to. Apotheosis works because the execution is smooth as silk and the aesthetics are fine-tuned, with a dreamy haze lining the songs that feels like Sargeist turned into stargazers. During the emotional climaxes they seem to be channeling their inner Woods of Desolation, creating a sublime, uplifting feeling that grows on you with every subsequent listen. At first, this seems like all the other black metal albums you've heard before, but by the third listen it turns into something a little more magical. 8.4/10

One of my favorite new band discoveries of the month, Gravehuffer takes a bunch of different extreme music influences from all across the metal and punk spectrum and distills them into a soup of riffs that never stops introducing new elements, but also flows remarkably well. It's like...melodic thrashgrind? That's also really sludgy and doomy sometimes? I dunno, whatever genre it is, it's cool as shit. What each musician lacks in chops they make up for in charisma and character, with a distinct personality lining everything from the punky sing-yelling to the atmospheric yet d-beat heavy drumming. It's artistic and creative while never losing its sense of whimsicality and fun - and all this from four old bros from Joplin, Missouri. 8.5/10

Between Dipygus and this, Memento Mori came out chuckin' knuckles in 2021. There's only two members in Altered Dead: one on strings, one on drums and both on vocals. It helps to have fewer cooks in the kitchen, especially when both people have the exact same goal: no frills, no gimmicky bullshit, just nasty sounding death metal riffs and d-beats until you're beaten into the dust. Returned To Life scoffs at the possibility of melody, but man is this still a ton of fun to listen to. While it takes massive cues from 80s punk and 90s death metal, the way the influences are blended is done in a more modern fashion, sort of like how Darkthrone intermingled black metal and punk in their 21st century mid-career.

I've heard this deathcrust style attempted by a handful of different bands - Ilsa, Oath Div. 666, Acephalix - but Altered Dead might be the most effective of the bunch because of how damn efficient their songwriting is. It goes: sweet grindy riff - nasty groove - maybe another grindy riff or two and that's it. Maybe they start with a slow riff on the longer songs to build tension. It's straightforward, but is guaranteed to get your head banging. The Celtic Frost cover at the end also fits perfectly, which may give further clues into how this duo is getting so much power out of simple elements. 8.7/10

If you happened to read any of my other reviews, this isn't a surprise. I gave a glowing review to this album back in December, and was so blown away by what I heard that I sought out to interview the band. Macrocosmos is like Hate Eternal and Mithras making love while Ufomammut watches, with a grinding dissonance that keeps a constant edge intact even as the atmosphere grows and evolves in different directions. Even though it's very much in line with the trends in death metal right now (in essence, death metal used to be about death and now it's about aliens), it's doing its own thing and is pushing the genre forward by moving it sideways. There ain't much more I can say about the album to let you know how much I like it other than it easily took the crown for my January 2021 album of the month. The order of the albums above was a little tricker, but when i started this list I knew this would be taking the top spot without question. 9/10

And that's it! Heavy on the death metal, it seems, with only one predominantly black metal album and not a lot really drawing me in from the more traditional avenues - still need to give the new Crystal Viper some more time, though, so that may change. Stay tuned for February's round-up!