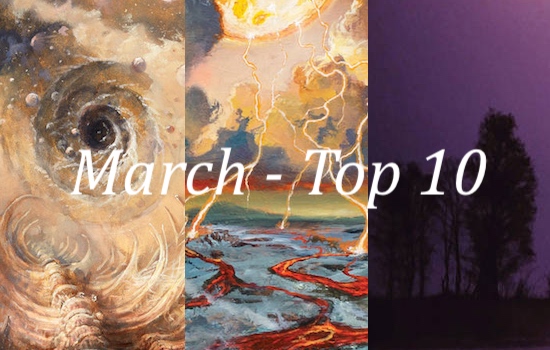 I'm on my third monthly top 10 and I'm already running out of stuff to say in this opening thingy. Let's do this thing.

Hot take time: I thought the Atramentus album from last year was kinda meh. That was an especially trying realization to come to terms with, given I'll happily throw my money at anything else Phil Tougas touches - seriously, the other four dozen bands he's in are all incredible - but the difference is that most of them are on the dextrous and technical side of metal, and Atramentus is his first full expedition into more atmospheric realms. Turns out slow ambient stuff is not his forte. Stygian is the sound of an AI robot that was trained to write Thergothon-styled old school funeral doom - all of the sonic characteristics are perfectly replicated, but the album doesn't take on an identity of its own besides "Chthe'ilist atmospheric b-sides".

Sepulcros, on the other hand, is what I want my slow-as-molasses funeral doom to sound like in 2021. It has a blackened edge to it that isn't quite as common, almost sounding like a full band rendition of niche genre merger Nortt. The sudden storms of speed are fitting diversions that keep the atmosphere intact - it drips from every pore of this, with finer details of the riffing becoming difficult to make out in the haze. Normally this type of album would be mood music that I would rarely listen to, much less recommend, but Sepulcros has an immediately distinct allure that baits you into listening all the way through. Once again, Transcending Obscurity has done just that.

Perhaps comparable to Kvist, one of the hidden gems of Norway, this Dutch quintet plays energetic, blast-heavy melodic black metal with some slight keyboard overtones. Despondent screeching lines the vocals, giving an emotive, harrowing vibe to riffs that would otherwise border on whimsical. The Netherlands has a rich, thriving and underrated black metal scene, and based on some other bands I've heard from the region like Urfaust and Laster, it's got a distinct, warped mysticism in its themes. Nothing on this is spectacular or gives me otherworldly chills, but it's hard to find a weak point anywhere on the album, and over time I can see this becoming a "bread and butter" listening staple for me because of how dang catchy some of this guitarwork is - and fortunately, it's woven into more complex structures that won't have me burned out after 5-10 listens.

8: Lebensnacht - The Realm Beyond
Naturmacht Productions

There was a lot of solid black metal releases that came out this month, and I flip-flopped between swapping this out for a more DSBM-styled release a la Nordicwinter or Suicide Forest, but what sets Lebensnacht above the scores of black metal I shoved into my ears this month is the groove in the drumming. It's got that straight-forward rock beat with a lot of hi-hat that gets my head bobbing, and the more restrained performance allows the atmosphere of the cold yet vibrant keyboards to flow around the riffs and elevate them.

While the riffs are strictly oldschool in style and influence, the production is balanced enough that the slight hazy fog in the mix doesn't feel like a way of making a lack of interesting ideas. The songs move in different directions than you expect them to and have a surprising amount of detail in their structures, being minimal and hypnotic without feeling repetitive. It almost feels like this is meant to straddle the line between cosmic and nature-inspired black metal, with occasional sublime, contemplative acoustic passages supplementing the delicately pretty yet haunting overtones in the more aggressive sections.

You need some death metal, full stop? Nothing else? Here you go. Kansas-based outfit Marasmus put out their third full-length this month. It's not a flashy album to someone who's already neck-deep in the style, but if there's one thing I've learned recently it's that Transcending Obscurity Records has a fucking great ear for memorable bands within this niche. The style is a subtle mix of two tried and true styles - modern Midwest brutality (think Origin/Unmerciful) and Floridian death metal a la Deicide and Vital Remains, and man does it ever execute well. No unnecessary filler or diversions in this one, making for a very efficient listen.

This is functionally in a very similar ballpark as Marasmus, also being a fast, straight-up death metal band with little to no experimentation on their established style. Creeping Fear have a slightly more blackened edge that hints at a tad more influence from the more occult iterations of the genre such as Incantation and Angelcorpse, but at the end of they day they serve the same musical purpose and are at about the same level for quality as the aforementioned Marasmus...except for the vocals. Creeping Fear's frontman has an incredible, feral shotgun howl that is reminiscent of the finest moments of Martin Van Drunen. The production on the vocals is spot on, with Hategod Triumph generally polishing and refining what was a solid base of punishing death metal grooves stapled to energetic, thrashy black metal sections.

I glossed over this a bit when I first started seeing promos come out. Progressive sludge metal is a mood music for me: admittedly, it's fucking amazing when it's on, with select albums by Isis, The Ocean and Baroness being among some of the finest pieces of music ever laid to tape - it can be heavy, atmospheric, epic, rocking, and powerful all at once, but for every album like that there's a dozen Intronauts worth of meandering nonsense. Then, I started seeing Dvne recommended more in various places (not to mention someone at Metal Blade obviously likes them), so curiosity got the better of me and I'm glad it did.

It's hard to tell where this is going to sit at the end of the year because this is such a recent discovery for me - usually I like to give an album at least a couple weeks to stew in my head before I write about it - but it's been maybe 48 hours since I first heard this. It made enough of an impression of me that I can't not include it in this list, though. The problem with a lot of bands in this style is that one piece of the puzzle will often be favored in creating the soundscape, but Dvne use sludgy, driving guitars, songwriting that slowly unfolds and then suddenly shifts, tonal, resonant vocals (both clean and harsh), and a myriad of other influences too diverse to describe but overall falling somewhere between mid-era Baroness and Mammoth Weed Wizard Bastard. There's only a few moments that make the hair stand up on the back of my neck...it's more just that Dvne is so carefully amazing at their craft and slowly introduces small little bits of things that catch your ear so there's never a moment where you don't want to pay attention. There's so much going on in this and it's so hard to rate it...all I know is that it feels like the kind of album that turns an up-and-comer into a heavy hitter. I rarely listen to hour-long albums all the way through, but this is one of those where it's almost a necessity to do so.

4: Blindfolded And Led To The Woods - Nightmare Withdrawals
Self-released/Independent

I was introduced to this on a very strong recommendation from Austin Weber of tech-death Tuesday (thanks dude!), and it perfectly happened to coincide with a period of time when I was exploring the back catalog of Cephalic Carnage. Blindfolded and Led to the Woods - Nightmare Withdrawals mesh well in a playlist with them, The Red Chord, and all of the other artists in that off-the-wall, scattershot deathgrind style that periodically becomes my obsession. Apparently they started as a deathcore band and over time added more progressive, mathy and grind elements, and I suppose you can still hear traces of their origin sound in spurts, but it's only one of the many elements in this constantly shapeshifting, rhythmically dense riff soup. The more paced songs like "Atop the Wings of a Magpie" still retain this breathing dissonance that gives the guitars a lot of depth, making them feel almost limitless. It may have taken a few albums worth of messing around to find their proper identity, but they've stumbled upon it somewhere between the sounds of Ulcerate and Animosity. Don't be fooled by the bizarre name and aesthetic, this shit is the real deal.

Much fuss is made about what black metal "is" in its spirit. Is it a way of channeling inner rebellion? An audial form of satanic expression? Is it even a serious thing or just a bunch of dancing animated skeletons at this point in its history?

Whatever that feeling is that you get when you listen to the black metal you love, that indescribable essence...Escumergamënt has it. Made up of members of long-running, well-known Swedish groups including Setherial who choose to remain anonymous, this new, strange entity has captured that mystical, otherworldly essence that I think we all felt a little bit when we first felt the impact this kind of music could have on us. It's been quite a while since a second wave-inspired sound felt this fresh and inventive to me without significantly altering the formula. Escumergamënt instead pushes the genre forward by moving sideways, going further into the less ventured areas of Burzum's droning, hazy keyboard hypnotism and Ved Buens Ende's delicate, unusual bending and twisting. Even then, .​.​.​ni degu fazentz escumergamënt e mesorga​.​.. is much more than the sum of those influences - if anything, they're mere supplements to the distinct, alluring identity that Escumergamënt effortlessly pour out of every riff.

..."the first time I heard Solar Paroxysm, I actually found it a tad underwhelming, but I knew better than to write off a Mare Cognitum album after one spin. Now that it's had a few weeks to marinate, I can conclude it's as good as anything else Buczarski has put out, and his most consistent work to date. This feels less like a collection of songs than any previous Mare Cognitum release has – "Terra Requiem" being the connecting bridge between the two bigger movements of the first two and last two tracks. Flurries of bright riffing with a hint of cosmic wandering shift more subtly and verses are sustained for a bit longer as well. It doesn't overwhelm you immediately, but it's a more rewarding listen long-term"

At first you aren't really sure what this is trying to be. Is it another wanky Inferi clone? A more progressive version of Insomnium, or perhaps a more technical Be'lakor? Early Cynic reimagined for the modern era?

Then, you realize it's supposed to be everything all at once, and normally that would be a turnoff, but Stortregn is unbelievably good at anything they try their hand at, from driving melodic death metal verses to tapping-heavy verse riffs to jazzy parts more focused on the intricacy of the rhythm action to big, booming atmospheres...This is a twelve-course, five-star buffet for any extreme metal fan. I already ranted about this here so read that if you need any more convincing, but buy this album already!!!

So, last month the best album was a black metal-tinged release amidst a sea of tech-death, and this time a tech-death album tops out a month that was otherwise dominated by black metal. Just in case you really cared about the trends going on in my monthly top 10 lists.

Speaking of which, here's January and February's lists in case this is your first perusal and you're in need of some more recent music to tickle your pineal gland. See y'all in April! (or whenever I feel like reviewing another random band)