British heavy metal legend Saxon doesn't need a further introduction here, I guess. They've just released their very strong new album "Carpe Diem" (read review here) and I had the chance to chat via Skype with their drummer Nigel Glockler. I must say that it was a very nice and funny chat with a lot of interesting answers to my questions. Enjoy reading! 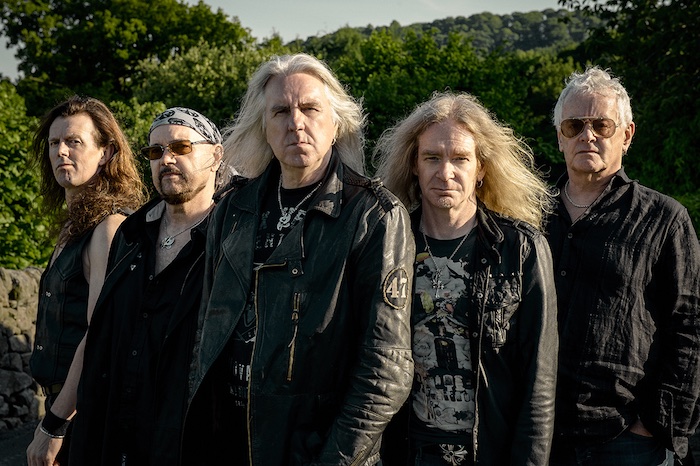 Hi Nigel, how are you doing? Did you all come well through these strange times?

Oh God, yeah that have been strange times (laughs). We're all here on the other side of it at the moment, so fingers crossed!

You've just released your superb new album "Carpe Diem". It's a term that is often used here in Germany and I guess it means all the same, no matter in which language you use this term. Do you want to tell us to seize the day literally because life is too short to miss a thing?

Yes, I think so. I say this too, when I've done other interviews and it's some kind of philosophy of life. It's like enjoy and grab life. Go out and be happy because unless someone knows something else, this is the only time and chance we get to do it (laughs).

There are many different stories on "Carpe Diem". Is there a red line between all this or is it just a loose story collection? I find it quite hard to find some similarities between the Industrialization and a Super Nova somewhere in space.

No, every song is its own thing. It is not like a concept album at all. It's just every song separate. We write stuff and for an instant if Biff might hear something and suddenly thinks that makes me think of this subject or maybe he already has in mind a subject for the lyrics and sometimes he might like to do a song about things and then we write for that particular thought of it.

And the album title isn't connected to the song too, is it?

No, it's only the title song. That's about the Romans defending against the Picts or the Scots, I don't know it for sure and they built the Hadrian's Wall for defending.

It seems that Biffs historical interests have a pretty wide range. Is he always looking up for new topics to sing about? 'Dambusters' for example is quite an interesting topic and I guess that today not too many people know about that any more….

I mean, Biff reads a lot, I read a lot and we actually both of us like history, so quite often on the tour bus we're talking about things like that. We both watch a lot of movies and stuff and if he comes up with a story – I mean it's slightly the same thing with 'Crusader', 'Man And Machine' – all those things are like historical things. We like writing about this, we're not some sort of "I love you baby"-type band, you know? We never have been really (laughs).

Do you just want to entertain people with the stories, or do you also would like for people to get more into these topics after hearing about it?

Roughly I think it's a little bit of both. Always you want to entertain the people when you play a live show or whatever but if it makes people think: "Oh I didn't know anything about that" and they look it up online or read something about it, I think that can only be a good thing.

Another track that is really outstanding is 'Remember The Fallen'. Is this a big fuck off to all the Covidiots who deny the pandemic and spread some conspiracy theories about it?

I haven't thought about that actually. That's an interesting allegory, actually but I think it's more to remember the millions of people that have died. It's been awful and imagine the families that have lost these people and on the other side remember all the people like the doctors and nurses that have fought to save them. All I can say to those people who think it's a conspiracy is go and see the families of the lost people and then see what you think.

You have some reminiscences to older Saxon songs on "Carpe Diem". I just listened to 'Forever Free' again and guess that it has just the same riff as 'Carpe Diem'. And 'The Pilgrimage' reminds me a little bit of 'Crusader' (meets 'Hells Bells'). Was that intentional to back a little bit into your own past?

No, I think it's just the five of us musicians and we have a certain sound and stuff. Sometimes you can do an album that is all fast stuff. I think it's quite nice to get some sort of mid-tempo groove. Because we've been going so long, you're gonna get that sort of thing with us anyway because when you think "oh, that sounds like so and so" or whatever, all that is because we wrote that (laughs). That's how it's gonna sound. There was no sort of deliberate attempt, but I think quite honestly for instance with 'The Pilgrimage' an audience is gonna groove with that. For me every song has got to have a good groove whether it's fast or not – it's the groove that has got to be right as the most important thing for me as a drummer.

I think that "Carpe Diem" is a very heavy and focused album, much heavier than its predecessors. Was there a lot of fury you needed to get rid of while you wrote the album?

Well, it was just how things came about. We always write more than we need for now and those were the particular tracks that inspired Biff to write lyrics to. That's how it worked and another time maybe it would have been different tracks. I mean, I was full of fury when I was doing the drum tracks you know just like aaaarggh (laughs).

"Carpe Diem" sounds very powerful thanks to the awesome production by Andy Sneap and if one wouldn't know about your age one could say that they are playing some guys in their best age. What's the recipe to still be able to play such great music?

I don't know, maybe I'm lucky (laughs). I just love playing drums. I mean I don't practice that much really – I mean I do practice but I'm not one of these guys that sits on a drum kit for five hours a day. I'm really not interested in that. I just really enjoy playing and I think that's the whole formula to it, doing something you enjoy. Something you don't enjoy – stop! And luckily, I'm still fit enough to do it. I really love it; I really enjoy playing fast and sometimes I play so fast that I leave the others behind (laughs).

You've played some shows in England with Uriah Heep, Girlschool and Diamond Head lately which were postponed due to Covid-19. How was the feeling to be back on stage after such a long time?

We did two shows last year, we did the Bloodstock Festival and we played there just before Judas Priest, the day they were headlining which was great and we did the Metal Hammer Paradise Festival in Germany in November. It was indoors in a tent and both of them were great gigs, and it was really good to be back on. I love playing live, I mean this is it and it's been annoying that we haven't been able to do it. So hopefully this year they're all setting up tours and everything for a big UK and European tour for the autumn and some festivals throughout the summer, Graspop in Belgium and I think we got Sweden Rock, it's gonna be a busy year, thank God. 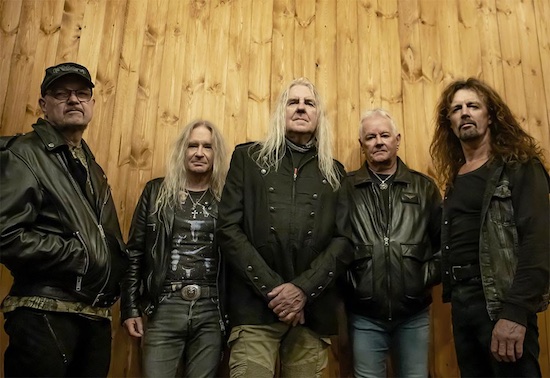 What about the audience? Were there also younger people or was it just about some mid-40s up to older people?

No, everything. All ages. This is the thing with us all the time, actually. Our audience, we always have a front. And the front is always full of youngsters. And the crazy thing is they know all the lyrics. It's great. You sometimes get fathers coming with their really young sons and at the front they're going nuts! It's brilliant. We get a cross-section of all ages, so we are constantly getting new fans which is great and really healthy.

I read not so very long ago a comment in a German magazine that a lot of those "dinosaur" metal bands will retire within the next few years and leave a gap in the scene. Do you think that there is anybody from newer bands that could replace e.g., Judas Priest or Iron Maiden?

Who called us dinosaurs, I want to know! This one is a dinosaur, haha!! (shows me a toy dinosaur which stood in the background)!!

Haha, I just thought about the correct term….

Well, for us it will as long as (laughs)…we'll keep going as long as people want to see us and buy the CDs and as long as we enjoy it. As I said earlier, if you don't enjoy it, don't do it.

I didn't want to say that you're going to drop it soon, don't get me wrong!! But maybe in some years, you know?

Oh yeah, it's not that we haven't sort of said that we're stopping. I don't think Maiden and Priest are doing this. Everyone's loving it and as I say, constantly getting new fans, younger fans which we do get now a lot. These two gigs we played in England, there were a lot of younger fans in the front. As long as we keep coming up with the ideas and stuff – why should we? Take Priest for example. What is it? 50 years now is it this year? People love seeing them and they're playing great, so why stop?

Before the interview is done, I do have one personal question – how much does heavy metal have an influence on you? Do you listen to that stuff personally?

Well, I listen to all sorts of music. It's more interesting what I don't listen to. I don't listen to rap! I hate it! Everything else I listen to. When I was at school, we had a choir at school, so I sang in it. I sort of loved what they called Russian Orthodox or just Orthodox chorus music. There is no instrumentation, only voices and some of them are just beautiful! Well, I can listen to that and the next minute I can listen to Rammstein. From an influence point of view, I'm not really sort of like a heavy metal drummer, my influence is more prog and fusion. I like more people like Billy Cobham and sort like this I've been listening to. I mean, I still listen to rock stuff, but I just go right across the border. There's lots of things I like – I like a lot of ambient music, some big band jazz like the 1940 stuff…good music is good music. And concerning metal I like bands like Evergrey or this band quite similar to Rammstein, Megahertz.

You're welcome, that was good fun!