Getting a little bit tired of all those melodic death metal bands? Pick up the latest The Crown outburst "Crowned in Terror" and I promise you won't be singing any of those sweet melodies for a long time. Although their music is also based on good dose of melody; aggression, speed and power is what makes them stand atop their peers. Those five guys are like bulls on Speed ready to tear any place down wherever they show up. With the addition of Tomas Lindberg (ex-At The Gates, Skitsystem, Lock Up, Disfear, The Great Deceiver) The Crown opens a new chapter in their career and sets the bar even higher. Just a week before they hit the States I had the pleasure to talk to Janne Saarenpää (drums) about their new member, album and musical inspirations.

Ready to conquer the States?

What's next, what are the plans for the rest of the world?

Tell us more about the latest news of Axis Percussion officially signs you?

Well, cool thing. I'm using their pedals and they were interested with endorsing them with people like me. It feels really cool to have my first endorsement deal; I'm actually first in a band to have one. I'm nothing but honored.

Maybe that's your first step to live from drumming only?

Since At The Gates called it quits Tomas Lindberg was involved in and still is, I think 4 (Skitsystem, Lock Up, Disfear and The Great Deceiver) projects so, how did he end up in The Crown?

We have known him for several years, actually. When we did our first tour in Europe we had a warm out band called Sacrilege and they didn't have a singer so he was hired to do the tour with them. That whole tour was one big ass misery; poorly arranged, everything was shitty but from all this we could always get into part mood and do great shows and have fun. We could see it right then that Tomas was really a cool guy and if things could go rough with The Crown he would be the good guy to work with. So, when Johan quit we wanted to have a guy that's experienced who've worked on the scene for many years and is as hungry as we are. Tomas was really the first and maybe the only name that come out when we were talked about replacement.

Aren't you afraid that with all these bands that are issuing albums with Tomas fronting that his voice won't be recognized as a unique for The Crown only?

Yeah, of course that's never good. I, personally really want to stay true to The Crown because playing in only one band only I'll help to preserve our sound somewhat unique. Of course he's wearing his voice out in many ways with those other bands but most of those bands are maybe not that... big and they are not into this same kind of music. OK, it's metal but it's not death metal so, it still feels it's really worth the shot because he's a great singer. You can hear that on this new album that he's at least as hungry, if not even hungrier then we are. It's a move in the right direction anyway.

Since you've announced the change of the vocalist so long ago was Tomas involved in the writing process of this material?

It was pretty much lyrics only, also Magnus, our bass player, he also wrote some of them since he already started coming up with the titles and concepts for them. It really helped Tomas to get into the band even faster. So, for this album he worked on lyrics only but I'm sure on the next one he will have as much input as everyone else in the band.

Since 'Death Metal Holocaust' features Johan Lindstrand as a guest vocalist does it mean that the band's members are still good friends with him and there was really no bad blood when he quit?

That's pretty much it and that was very cool way for him to say goodbye to us and fans. Of course it was hard when he mentioned that he wants to quit the band but he was nice enough to say it in due time. When he actually quit it was almost a year since the first time he mentioned it and that's of course helped us to still be friends through all this.

Was it also like returning the favor since Tomas guested on your previous album?

Yeah, that also. It was cool, Tomas sang on our previous album so why not switch everything. [laughs]

Going back to the hunger topic... It seems like The Crown have sped up the tempo and it's even more aggressive than before. Was it intentional or new blood ignited the flame?

No, it wasn't intentional and I feel really good saying that because you can tell that many band are only aiming to get more brutal and that sucks 'cause you can see that their songs aren't turning out as good as they could have been. It just turned out this way and I think the main reason that our songs are faster and more brutal is because we have been touring with these total high quality bands. The US tour with Cannibal Corpse, Nile and Krisiun [laughs] it can't get any better. European tour with Morbid Angel... after seeing those bands every night for four- five weeks it brings back memories how it is to play fast. They are gods in handling their instrument so all those bands really inspired us a lot. Plus we are big fans of those bands too so; it just felt natural to speed it up.

The Crown started as a death metal band but it's hard to call "Crowned In Terror" a death metal release. Did it also just turn out this way or you don't want to limit yourself within one music genre?

Well, when people ask us what we're playing we say death metal but after the second album we were quite confident in ourselves that we could try stuff that all of us like even though it might not be the purest death metal. We didn't want to limit us to one genre only we wanted to do death metal but with other elements in it that we like and what style it would be it's not really important as long as we feel it sounds as The Crown.

What in your mind differs The Crown from the rest of the Sweden's scene?

I don't know... there's a lot of talk about Gothenburg sound that is almost purely about melody and we're not about melody only. It's hard to say... but I think we are a bit more brutal and faster than usual Swedish bands.

I've got one more that's even harder to answer... where do you feel you stand among your peers (Entombed, The Haunted, Soilwork...)?

Somewhere in the middle... [laughs] It's really hard to say. I would pay money to get a chance to jump out of the band and become a fan not involved in the band just to know how people look at us. Are we big in Sweden? Are we small? It's impossible to tell from where I stand, really. 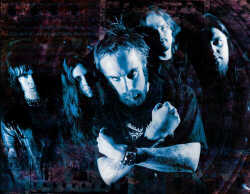 Wasn't the choice of Mega Studio a conscious decision to separate The Crown from all those bands that record in Fredman and Abyss?

Well... [laughs] We were actually about to go to Fredman's studio again but as usual we were very lazy booking the studio and stuff, so when we called him he told us he has some free time in March, right now. So, we would begin recording now and that made us to pick Studio Mega. We knew he didn't do any big albums before but he has a good equipment and right attitude so, we felt like we can take a shot and try it right there. The plan was to mix that stuff in Studio Fredman and we did so, but it didn't sound good, those studios didn't mix well. So, we went back to Studio Mega, which was a good decision because at the end we could really hear that we sound as good as it does on the album. We weren't afraid to get Gothenburg sound going to Fredman because we're pretty confident that when we go to the studio with ourselves and our equipment I'm sure we will preserve at least parts of The Crown. You'll always hear it's The Crown album, no matter what studio we're in.

Can you explain why on the back cover of the booklet your logo remind me so much of Venom? I don't see too many similarities between two bands?

No, it's very much a coincidence. It was this German friend of our bass player who had made it for fun on his computer and he send it too him to check it out. We though it was so well made that we might as well put in on the album. Yeah, we don't sound as Venom but having this sign there is kind of a paying tribute to them for being there when this form of music was created. They are one of the most important bands for us; we wouldn't sound like we do if Venom wasn't there at the beginning. I hope Venom guys won't take it as a plagiarism...

Since you've started playing as young kids I was wondering if are you still good friends that meet together for a beer, go out or wives and families (or girlfriends) took it all away?

Unfortunately it's time to end this interview... all I can say is to congratulate you on really great album and I hope to talk to you in person in two weeks in Chicago. Any final comments?

Cool. I hope that all the people that would read this interview will check out our album and maybe come to the show to see us 'cause we love playing live and the more people the merrier, as they say. [laughs]