I guess that the German band Kreator doesn't need any further introduction here. These days the guys released their 15th album "Hate Über Alles" (read review here) which is a really old-school thrash wrecking ball. Nevertheless the guys let flow some more unusual influences into some of the tracks which makes the whole thing pretty much interesting. I got the chance to do an interview very spontaneously (1 ½ hours after getting the reply) and of course you don't say no to such a thing. So I had a very nice and funny chat via Skype with their guitarist Sami Yli-Sirniö about all this and many more. Thanks again for this and enjoy reading! 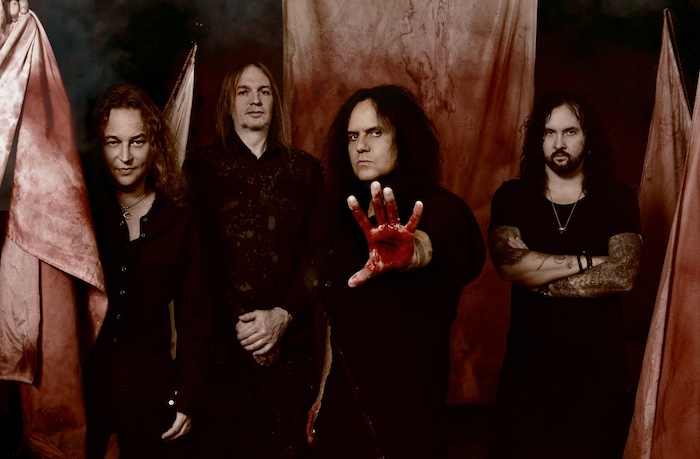 Hi Sami, thanks for doing the interview that spontaneously! How you're doing?

Everything is fine! We wanted to rehearse twice because we are flying to Czech Republic the day after tomorrow for a festival and we haven't played that many shows yet this year and we wanted to warm up a bit and play through a set for our condition. Today went well, tomorrow hopefully better and then at the show hopefully really well (laughs).

How often do you rehearse together, probably not that often because you live in Helsinki, right?

For the albums we rehearsed a lot. We always had two-week sessions where we recorded demos, then we took a two-week break and then it started all over again. That was before we went into the studio in Berlin. We rehearsed a lot, but that was also during the pandemic. Before a tour or before festivals, whenever we want to try new stuff, we rehearse. Helsinki is not that far away either, it's a 1 ½ hour flight.

On the 10th June you're going to release the new Kreator album "Hate Über Alles". Until now, except in the Deaf Forever, the biggest German metal zine, there weren't any reviews about it. What are your expectations towards the reception?

This is always a question. We did our best and worked on the songs for 2 years. We had a lot of time and we used it well. As a musician you do your best and you can only hope that people like it. This time the approach is more direct and spontaneous than on the two albums "Phantom Antichrist" and "Gods Of Violence" before. There we worked with Jens Bogren as a producer, who is very good, though sometimes you get the feeling that he is a perfectionist (laughs). We thought that for the kind of music that Kreator makes, we'd try it with a different producer this time, which is Arthur Risk from Philadelphia. He's a younger guy and I think that was the right decision because the music is straight in your face and very spontaneous.

What would you say that this is the biggest difference to "Gods Of Violence"?

Okay, spontaneity...we already recorded many demos and when we were in the studio in Berlin, we didn't have so many takes like over and over again. We realized when the feeling was right after recording something and said "this is it, let's keep it like this!". We didn't try to make it too perfect and if there's a little mistake here and there it's not the end of the world because I think that's part of that kind of music and that it belongs there. That kind of difference in the recording was there but otherwise it's like making music as usual, trying to write good riffs and write good songs and make good songs and do your best. Of course for a band that is as old as Kreator the biggest challenge is trying not to repeat oneself. That's what we always have to be careful about, after all it's the 15th album we released. But I think it has a very fresh approach to it and a nice atmosphere not only because we have a new producer but also a new member in the band (Frédéric Leclercq since 2019; M.).

Your new bass player is in the band now for 3 years. How did he settle in very well Kreator?

Yes, but unfortunately we didn't have so many opportunities to play shows. Once we had this livestream for Wacken, in Chile we played a festival together with Slayer and a few weeks ago at the Inferno Festival, but everything worked out great and we know Frédéric from before. In the studio he was there almost all the time; he's also a very good guitarist and has a lot of ideas for me as well (laughs).

I have to confess that some songs confused me a little bit because in my opinion songs like "Midnight Sun" or "Dying Planet" or the almost balladic vocals like in "Become Immortal" remind me a lot of Endorama, which wasn't the most attracting album in the Kreator discography. Did you want to break out of this frame that you set with the last albums?

As I said, we've been around so long that we try not to make the same album twice. With Dying Planet, we tried to write riffs that were as evil as possible (laughs). "Midnight Sun" - "Endorama", I don't know if it's similar to "Endorama", that was more of a gothic record. I think the new album is versatile and it wouldn't be good if every song is like "Hate Über Alles" (laughs). A little bit of variety in the music is always important for me.

Another aspect I noticed is that you have much more classic heavy metal elements in the songs and you are acting much more playful than before. Is this something that you did intentional?

I think it was more unconscious, at least for me. We never think that a song should sound like another band. Sometimes, of course, you notice a riff, for example in "Dying Planet", that could be from Celtic Frost, but then we try to change it somehow.

"Hate Über Alles" is a reference to the Dead Kennedys and a very matching title, especially since the war in Ukraine broke out. I guess this may be, sad but true, the most matching title in 2022. Would you agree with that?

Definitely, unfortunately yes. The title was created before the war, but unfortunately it fits quite well. Some people thought that the title is too crass for a German band. I don't think that at all, it's totally okay. Eliran Kantor, who did the cover, said that if someone thinks the title is too harsh, they should know that Eliran is a Jew. "Über Alles" does, after all, appear in the German national anthem. Everyone who listens to Kreator knows what it's about.

In "Midnight Sun" you're cooperating with Sofia Portanet, a German newcomer who is more into pop music. How this collaboration did come to life? I was pretty surprised that a vocalist like her is taking part in a Kreator song, haha!!!

Sofia lives in Berlin, Mille lives there too and that's where they met each other. When we were in Berlin to record the album - for the drums we went to Hansestudio and guitars and vocals we recorded in a smaller studio in Kreuzberg - we thought that the chorus needs something special. On the first demo I thought the first verse of "Midnight Sun" was totally cool, but with the chorus I thought there has to be something more. Then we asked Sofia if she wanted to sing on the song and tried that with her (laughs).

Can you tell me a little bit more about the lyrical content of the album? Is there a red line between all the songs?

Mille wrote all the lyrics, but the themes are similar. It's about death, the end of humanity, natural disasters or war (laughs). It's kind of a reflection about the time we live in. I think Mille writes very good lyrics, but it's also best if only one person does it. Probably that's why there is a common thread - if everybody would write lyrics, maybe it wouldn't be so good.

You have postponed the album release a few times because of the pandemic. When did you finally finish "Hate Über Alles"?

We had demos of all the songs that we had recorded ourselves in Essen in 2020. But then we took our time because it wasn't easy to fly Arthur Risk in at that time. We recorded the album version in October 2021 in Berlin. It was okay to have that time after the demo recordings, because it gave us time to think about the songs and change something else. You don't usually have that.

You have released three videos from the album so far. Are there some more planned?

Yes, from "Become Immortal". There are kids playing the song and we are not on it at all. Among others, the son of our drummer plays on it.

Yes, many. If I could remember them all! Finally also shows and festivals. Especially in Finland there are over 30 festivals every weekend and I will go to many of them as a visitor. That's the best thing that can happen.