Swedish doom legends Candlemass just have released their thirteenth full-length album "Sweet Evil Sun" (read reviews here). Is it a bad omen? Well, probably not. Guitarist Mappe Björkman with whom I did a WhatsApp call mentioned a lot of good things about the album. We talked about the actual band situation and also about some slight changes in the band's style. Enjoy reading! 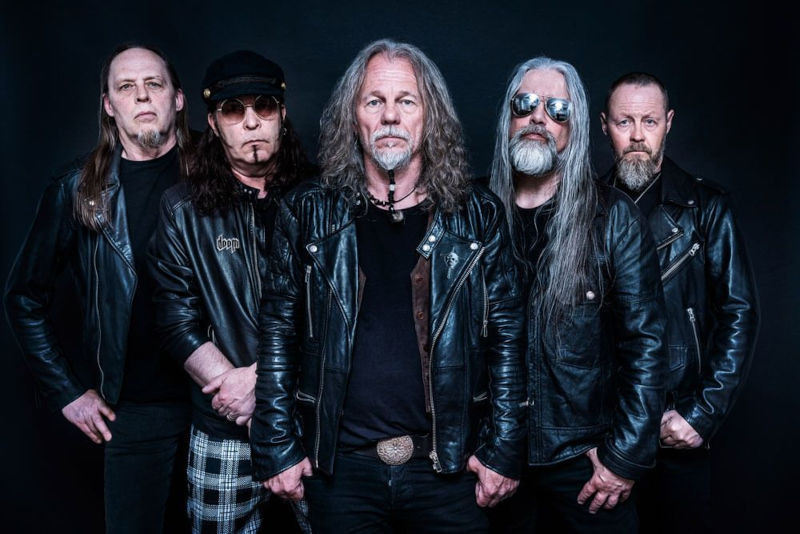 Hi Mappe, thanks for taking the time for the interview. How are you doing? You released your 13th full-length album "Sweet Evil Sun" on the 18th of November. Are you still excited about doing this after being part of the business for so many years?

Yeah, every time you release a new album it's fantastic. This time it's not being nervous but more the adrenaline thing. The last album "Door To Doom" we had with Tony Iommi and we had a Grammy nomination in America as well – it was a big thing that happened around us that time after so many years. When it comes to now this is the first album that we do with Johan Längquist who has been like a hired hand to us both on "Epicus Doomicus Metallicus" and the same with "Door To Doom". He had two weeks to record that one. I think this is the best that we actually can do to have a new album with him. I have worked with him for one year and it's fantastic.

I hope you aren't superstitious because it's the 13th album by Candlemass!

Haha, no,no! The thing is that every album is a fantastic thing to do for us. We did the reunion of Candlemass in 2001 and we said to do one show. We didn't talk about doing an album and now we have 2022 and the reunion thing has been longer than we did in the 80s and 90s. I see it more like we just go one step further and it is so fantastic to see the audience that wasn't even born when we released the first two albums and they sing along to all our songs, that's amazing to see that. You get so much adrenaline to do something new again. I think we made it very well to the new audience and the old Candlemass fans. I think the people like it and we got a very good response so far from the people who have heard it yet.

Was it easy to write and record the album with all these problems going on or did you have bigger problems in the creation process?

I have listened to the album several times and I think that it is much easier to listen to than "The Door To Doom". What would you say makes the biggest difference to the last album?

"Door To Doom" was finished and then Johan came in at the last minute and we had it completely recorded with Mats and it was written for Mats vocals. When we parted company we called Johan and it was the right time and the right place because I wanted him as the proper Candlemass singer since Messiah departed in 2006. I had wanted him since that time but it wasn't the right time for him and maybe not for us and now the right time was there. This album is a more proper Candlemass album than "Door To Doom". "Door To Doom" was fantastic but now we had the chance to work with Johan and for him as well. To do it together and that he contributed his input and not just something that was done by the old singer but that he actually did something from the beginning, therefore I think this album stands. It's the first time for Johan to be a full-time member.

Can you tell me a little bit more about the meaning of the lyrics? I tried to interpret 'Sweet Evil Sun' and 'Scandinavian Gods' but I really do not have an idea what it is about… maybe challenges one has to face and that our heritage will live on after we die?

But it doesn't have anything to do with climate change, has it?

What's up with 'A Cup Of Coffin'? That sounds like some very bitter British humor…

The thing with Candlemass and what we've done through the years is of course always very serious but we also have some kind of read between the lines and some kind of humor. Of course we are a serious band but you always have to do this little bit sort of funny things in your catalogue and in what you are doing that people see that you don't take everything so fucking serious all the time. Some bands just take everything so serious and that everything is that perfect. We are very serious but we still have that humor and when we want to do it, we can do it if it's the right time. We have humor in the serious things that we are doing.

How did you come to the idea to make the duet with Jennie-Ann Smith from Avatarium? This is quite a cool song and something totally different from the regular Candlemass stuff.

That's a good question because that song is fantastic. I think it's something that stands for Candlemass in 2022. Jennie-Ann is like a family member for us, I mean like the whole Avatarium. Markus is producing our album and we are a community with them. That was an idea that came up that it would be perfect to have a female voice here. And the only female voice we could think of was Jennie-Ann because she's in the family. I think that song is amazing because it sticks out so much from the other songs because of that. The chorus line and the duet between Johan and Jennie-Ann is fantastic. I think it's like if you don’t like that you don't like Candlemass 2022. You have to do something new in a good way and as I said, I think it's amazing.

Haha, then you won't like the review from the German Deaf Forever because they said that the song isn't your best one and gave you 7.5 points out of 10 for this reason.

Well, I think we got up to seven points in some magazines. Of course I care about reviews but people are always complaining about things like "it doesn't sound like this…". One of my best friends, Tobias from Ghost has the same problem when his albums get reviewed: it's not true anymore because he is doing this and that…this is bullshit. I mean he has one of the biggest bands that we have in Sweden and he is like beyond everything and if you don't like it then listen to something else. And it's the same thing with Candlemass – if you don't like it you don't like Candlemass 2022. We had to do something else and if you don't like it. There are so many other bands that I don't like. I have full respect for bands that I don't like but I don't listen to them. But there are other bands you can listen to and I don't care. The thing is when you get good reviews of course you care about them and you don't wanna get bad reviews all the time. But the good reviews are holding up for the bad review reviews. If you think that Candlemass got to sound like on "Epicus" 37 years ago, this will not gonna happen. We all are 37 years older now and we have to do something to take Candlemass further. We've been around for so many years and why should we do exactly what we did in 1986?

You produced two videos, 'Sweet Evil Sun' and 'Scandinavian Gods' so far. Why did you decide for this animated stuff? I sometimes have the feeling that this has become a new trend and at least I don't like this kind of video too much for metal because I think that this somehow makes metal too hip and nice, haha!

Yeah, we talked about this and it was because every older band is doing the same kind of videos standing on a stage doing their thing or just have video clips driving your car or whatever. Everybody is doing that and you can see that on YouTube. You can see thousands of live gigs from Candlemass on YouTube – why should we do a video with a live gig? It was another thing when you were in the 70s or 80s and they showed the videos as promotion and you didn't have the YouTube channel but I think it isn't interesting anymore. I think it's cooler to do a video where people can speculate what that means. It's more like just to do something else instead of that what every band is doing. I see a lot of videos from bands which are very cool but it's not interesting anymore. So when the idea came up we said "yes, fuck, go for it!".

With "The Door To Doom" you were nominated for the Grammys – do you think you can reach this with "Sweet Evil Sun" again?

No, I don't think so. There are only two bands in the history of Swedish metal – Ghost and Candlemass – that have been nominated for the American Grammys. That's the biggest thing you can do in the music industry. We won two Swedish Grammys and the thing is that those two Grammys don't mean anything compared to being nominated in America. And that nomination made so much more for us than that we won two Swedish Grammys and of course it was a great song - 'Astrolus' with Tony Iommi on that song - we were nominated for. In America you get nominated for the best metal performance and in Sweden for the best metal album. I think it was the combination Candlemass featuring Tony Iommi which was a big thing. I would say that being nominated in America was the coolest thing I've ever done in my career. So I say never say never but I think that the chance of being nominated again is very very small.

Do you have any touring plans so far? I saw that you're playing two festivals this year.

Those festivals we just play "Nightfall" and "Epicus". We are going to promote the album next year and we have an American thing at the West Coast we are working on right now because we've done some gigs on the East Coast. We are also working on some big festivals in Europe as well and hopefully we can do an American tour because I love to go there because it was amazing to see the audience, how much they like Candlemass. Of course we want to promote the album as much as we can but so many things happened after the Covid things. So many bands are already booked and there are so many festivals that were booked before Covid so it's quite hard. I just talked with my friend from Dimmu Borgir today who said "fuck we don't have any gigs booked yet". So it's all because of Covid. The bands were already booked two years ago. But go for it as much as we can.